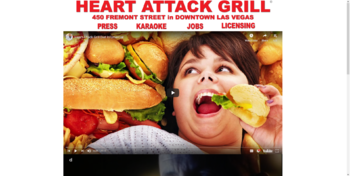 located in the heart of Las Vegas, Nevada: it was previously located in Tempe, Arizona and Dallas, Texas, although both of these locations are now defunct.[3][4] The restaurant is notorious for serving up dishes containing inhuman levels of fat, cholesterol, sugar, salt and calories, with their infamous "Octuple Bypass Burger" (see Menu below) measuring in at a colossal 19,900 calories[5]. The grill's slogan is "Taste worth dying for": true to its name and slogan, people have in fact died as a result of frequent dining at the Heart Attack Grill.[6] The company, to nobody's surprise, has generated significant controversy in its history, with calls from health experts to shut the place down.

Have you ever dreamed about a restaurant that didn't care about you stuffing yourself on the absolute worst junk-food imaginable? Heart Attack Grill has it. You may never have imagined deep-fried butter

In a nutshell, the entire concept of Heart Attack Grill is arguably more terrifying than any Six Flags haunted house, possibly by hundreds or even thousands of magnitudes.

Heart Attack Grill first opened in 2005 in Tempe by Jon Basso in an attempt to serve up what he envisioned as "food pornography".[7] Basso likely wrote this down in his dream journal as soon as he had it, as he was inhaling his middle-of-the-night dose of Vicks neck rub. Puportedly, before becoming a food pornographer, Basso was actually a fitness trainer and used to run a few Jenny Craig

Despite this, the restaurant was apparently a success, as it managed to thrive for six years until 2011, when the location abruptly closed down on May 31st of that year, two months after the death of spokesman Blair River (see Controversy below). It has never actually been established if his death is the true reason for the location shutting down, but it is generally accepted that it is.

A location in Dallas had opened just earlier that month, but was closed by October of that same year due to 350lb+ people pigging out on free food, thus resulting in enormous amounts of debt, which in turn resulted in non-payment of rent.[9]

Finally, in October 2011, the Heart Attack Grill in Las Vegas Nevada opened which remains open to this day. Notice how, for some really strange reason, the three locations almost never operated concurrently. There was, however, an attempted expansion to a second Las Vegas location… which closed after less than two months[10] (cue the Price is Right losing horn[11]).

So here's how this place works: customers are called "patients". When they first show up, they are given a hospital gown and one of those colorful plastic wristbands they use for, whatever reason they use them for. The waitresses are called "nurses", dressed in incredibly tight and revealing nurse looking outfits: most nurses appear to have enormous breasts, but this is mostly an illusion created by the tightness of said outfits (which is no doubt the intention all along). The waitresses, of course, take orders, which are called "prescriptions".

The real joy of Heart Attack Grill is that you can eat all the food for free. Only, of course, for those who fulfill the following requirements:

Customers shouldn't order more than they can eat. If they cannot finish their meal, they are led to this big pipe thing near the front of the restaurant. There, the nurse grabs a big wooden paddle and, you guessed it, busts you big time in the bummies.[12] If you somehow enjoyed that experience and want to take a piece of it home to remember it by, the used paddle can be purchased in the aftermath of your butt bustin'. Go home and frame it on your wall or something. Maybe down the road you can even sell it to Rick Harrison at Pawn Stars (conveniently also in Las Vegas) for jack shit a fortune.[13]

But wait, there's more! Customers who finish anything beyond the Triple Bypass are placed on a wheelchair and, literally, paraded through the restaurant all the way out to their vehicle in the parking lot by their "personal nurse", who served them inside[14]. 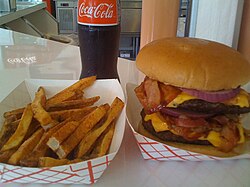 And that's not all, all hamburgers come with all you can eat "flatliner" fries, cooked in pure lard, as if the lard coated bun wasn't enough. This counts as another 600-700 calories, by the way,[16] so with the Octuple Bypass, that's officially more than 20,000 calories.

Their drink selection is quite impressive indeed: Heart Attack Grill features an extensive selection of beer and tequila for those who aren't satisfied with ingesting over 20,000 calories of what the United States Government might literally try to ban if we gave our politicians ideas. Another option that goes perfectly with the Octuple Bypass and lard fries: buttermilk fat shakes (another 600-700 calories). There is also bottled Coca-Cola made from pure cane sugar (which at least it's not High Fructose Corn Syrup, right?). They do not sell any form of diet soda[17].

Furthermore, you can even order cigarettes and have a good smoke while awaiting your heart attack platter. There are even candy cigarettes for the children.[18]

Heart Attack Grill has been frequently accused of deliberate marketing controversy:[19] i.e, the deliberate act of creating public controversy as a means of free "unintentional" advertising. The restaurant takes advantage of their notoriously unhealthy dishes as a way of drawing attention to itself, thus luring in more potential customers, especially tourists who travel to Las Vegas from across the country.

Heart Attack Grill briefly ran a YouTube channel[20] in 2017, when they posted a poorly produced 30-minute "infomercial" in the style of a medication commercial.[21] They even went as far as to use REAL OBESE PATIENTS, let that sink in.

After uploading only 4 videos, all in 2017, it appears that their YouTube channel is no longer active. However, there are a plethora of short, sound-less videos on their official website,[22]. including verything you could possibly think of that goes on back in the kitchen.

The franchise has also appeared frequently in television programs[23][24]. There is even a section of simple and easy to follow instructions for productions crews who desire to film at the Heart Attack Grill,[25] because they're, you know, not into publicity or anything right?!

As you might have guessed, the restaurant has been dealt with a great amount of controversy throughout its history. While the entire concept of this place might be truly laughable, it has, in fact, had lethal consequences.

The restaurant's spokesman, Blair River, died on March 1, 2011, at the age of 29, from complications of pneumonia.[26] Two years later in 2013, the 52 year old unofficial spokesman daily patron, John Alleman, died of a heart attack outside the restaurant,[27] true to the restaurant's name… and slogan.

Unsurprisingly, some food experts have advocated shutting down Heart Attack Grill[28] due to its rather unapologetic serving of deliberately exceedingly unhealthy dishes.

The Arizona Board of Nursing and the Center even filed a lawsuit against the company due to its defamatory use of nurses.[29]

Jon Basso was sued for sexual harassment claims by a former waitress in January 2019.[30]