I've already created an article about one of the US ones here. Sad thing is, this has spread (with "controversial" press coverage) to the UK. Trashbat 07:58, 25 June 2007 (CDT)

Maybe we can merge the silver ring thing into this...cite studies on abstinence programs, and on US Foreign HIV policy and how its tied to abstinence...as if abstinence matters in Africa when your husband comes home after 3 months in the mines and sleeping with ho's.--PalMD-yada yada 09:38, 25 June 2007 (CDT)

As much as I love the lulz, any chance we can stay on topic with this one? User:PalMD

Im putting this here for now, maybe we can discuss if it helps the, uh, message.--PalMD-Si Quaeris Peninsulam Amoenam Circumspice! 21:56, 10 August 2007 (CDT)

Weed and the Institute for Research and Evaluation[edit]

Ive been trying to look into these two, but im not finding much: Ive tried pubmed, and it finds only two papers by the Institute for Research and Evaluation, of which one is the abstinance study again, and the other something about the sociodemographic profile of tobacco use that I am not even sure is the same Instutute... its from Maryland, while the abstinance study Institute is in Utah. Stan Weed in pubmed returns a single paper, a different study on abstinance education (I do not know of these are two studies, or one study and two papers presenting results). Google shows even even less - its just various reports on the same abstinance paper, over and over, reported in different ways with different spins. It might be that im just not searching the right specialised places, but to my any scientist or institute with such a tiny output sounds a little suspicious. Between both google and pubmed, between IRE and Weed, I can find not a single piece of scientific work other than this abstinance study. At best, another abstinance study and a paper that may or may not be by the same Institute. So, could someone with more of a scientific background than me look into this? Is the IRE a legitimate research organisation, or a political front? Does either the institute or Stan Weed or his co-authors have any known connections to social-conservative political groups? Dig up a little dirt here, because I am very suspicious that this work may not be trustworthy. - Suricou Raven, and appologies for not making an account for just this quick edit.

I dead-ended on him when i did the research for this---which is bad news for him. I'm pretty good and scouring the literature and figuring out legit from illegit sources at this point. Since I couldn't find details, I left it as is---basically mentioning that supporting evidence comes from a single institution and person, which is not scientifically encouraging. Cool name though.--PalMD-If it looks like a donut, eat it 09:59, 25 November 2007 (EST) 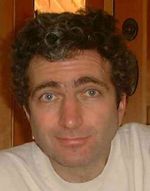 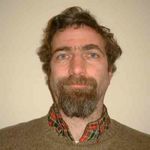 The hormone imbalances caused by prolonged abstinence generally lead to mental and physical stress. Younger people just out of puberty can alleviate this stress through rigourous physical excercise such as that practiced by college sports students. For older people the methods adopted by some religious orders that adhere to a regime of abstinence can provide some relief. Such abstinencers reduce the harmful effects of abstinence by following a strict daily routine, a controlled diet and various mental exercises such as meditation, prolonged prayer or other mentally taxing rituals.

I know, when the section started, I thought it would be funny, but it was just, well, stupid. I might be a good candidate to rewrite a first draft of the section, since, well, I am a funny bastid and appreciate the biofeedbackup of abstinence over three days. But, mostly, because I am a funny bastid. IMNSHO.  :P humanbe in 22:32, 10 August 2007 (CDT)

Currently the article says, "abstinence-only doesn't work, free contraception and sex ed does". But the experience of the UK would indicate that neither is particularly effective. Contraception is freely available, including emergency contraception, to everyone, and sex education is a mandatory part of the National Curriculum. Yet there has been no real impact on teen pregnancy rates or the the epidemic of teen STIs. Despite knowing about contraception and it being readily available, teens seem to simply choose not to use it. There are obviously much more influential factors at work, which neither approach tackles. Is there scope for this in the article, or a separate article? Fox 11:22, 18 March 2009 (EDT) 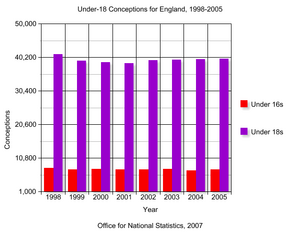 The "20 a day" statistics for schoolgirl pregnancy.

I think in the UK it's mostly that the attitude of some kids is, seriously, that if they have a baby, they get a free house and another dole cheque. It's really very little to do with the sex education and more about general attitudes that's the problem. ArmondikoVsshole 11:32, 18 March 2009 (EDT)

(EC) Compare the Netherlands, where contraception is also readily available, sex ed begins at a young age, abstinence programs are pretty much non-existent, & teenage pregnancy rates are probably the lowest in Europe. The UK is kindof atypical in a lot of ways. Teens' lifestyles & choices, including sex & pregnancy, have as much to do with cultural trends & peer pressure as they do with education. ΨΣΔξΣΓΩΙÐ

Someone (user:Strom) just made a stub to try to cover this under "abstinence-only sex education" or some such. Is the title here weak in that they didn't find it? Could it be better? ħuman

I just realized that abstinence-until-marriage programs are unconstitutional. Compare:

Some religions, e.g. Mormonism, endorse or even require polygamous relationships, so teaching students that only a monogamous relationship is to be expected from them violates this. Hence, abstinence-only pseudo-education violates the First Amendment, and is therefore unconstitutional and should be removed from the curriculum, preferably replaced with sex ed which has been shown to actually work.

Mainstream Mormonism has not been polygamous for a long, long time. There are many reasonable restrictions that can get placed on behavior even though a religion might require said behavior--animal or human sacrifice, child marriage, etc.etc.etc. P-Foster Talk "Watched Mad Men thinking it was supposed to be a sit-com. Found it disappointing." 15:10, 4 February 2012 (UTC)

Here's something I'm itching to add to the page: There are about 13.4 million high school students in the US, divided to three grades (https://www2.ed.gov/about/offices/list/ovae/pi/hs/hsfacts.html). So, call the amount of students receiving the education every year 4.5 million. Presuming twenty people per class, and that each class is given the education separately, this would be a total of two hundred and twenty two thousand lectures given on the subject each year. In 2008, a total of $176 million went to abstinence only education (http://www.siecus.org/index.cfm?fuseaction=Page.ViewPage&PageID=1158). This makes it $788 per lecture. Finally, it takes roughly five seconds to say "Not having sex is a pretty good way to avoid the bad side effects of having sex", making the effective cost per hour of abstinence-only education a whopping $567k. Too tongue in cheek? — Unsigned, by: Hertzy / talk / contribs (signed by bot) 14:26, 18 September 2014 (UTC)