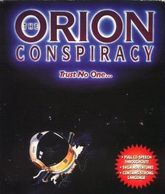 The Orion Conspiracy (also known as La Conspiration d'Orion) is a short movie by French director/photographer Seb Janiak that was released in 2007/2008. It consists of a long presentation with a slideshow given by an anonymous lecturer to a group of important-looking men that tries to tie every major conspiracy theory in a single unified conspiracy theory narrative. Given the fact that the images in the slideshow are either blatantly photoshopped or taken out of context, chances are that the whole thing is indeed a tongue-in-cheek artsy movie, probably with some kind of message about gullibility and the media, and not a straight example of Seb Jainak being a true believer. (Though the guy apparently doesn't like the US. Or at least American militarism.)

The defining feature of the movie is the images shown in the slideshow. Some of them are just publicly available pictures (e.g. an American battleship firing its guns, NASA pictures or snapshots from old movies), others are already existing conspiracy theory images (e.g. Nazi flying saucers), but a lot of them seem to have been Photoshopped specially for the movie. Some images may have been reused from other sources - there are a few "giant skeleton" photos that are either taken from or inspired by a Worth1000 Photoshop contest that had been previously recycled as an Internet hoax.[1] The website has a gallery listing (a large part of) the manipulated images and even offers some of them for download as desktop wallpapers.

Since then, some of the images have been wittingly or unwittingly re-used by various conspiracy theory websites.[2] One of the more amusing examples is the picture of an Apollo astronaut on the Moon with ruins added in the background – it was used as a background image of the website of the 2012 Secret Space Program conference,[3] a vehicle for the likes of Timothy Good and Richard Hoagland. (Most probably they are not that gullible, but they sure liked the idea...)