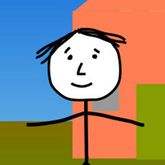 )[1] is a YouTube contributor and famous musician. He is a progressive atheist who plays a bigoted and ignorant Christian in his parody videos. Said videos parody common arguments from creationists. (That said, they are astonishingly close to the real arguments. Poe's Law doesn't mean that the satire isn't biting.)

One of his most popular videos features his boneheaded persona smugly rattling off a series of absurd fallacies[3] and spawned the satirical "Checkmate, Atheists!" Internet phenomenon. Current satirizes the "atheists hate god", saying: "As always, waging war on the atheists who hate our Heavenly Father. And by atheists I also mean agnostics, who are people who aren't sure if they hate our Heavenly Father."

Some of Current's videos are also pseudo-educational, e.g. in his "Christian meets Invisible Pink Unicorn" cartoon video he demonstrates the meaning of "emergence."[4]

Current was originally a 9/11 truther; then, he noticed that his beliefs on the WTC7 collapse fell into the category of an argument from incredulity.[5] To test the gullibility of 9/11 truthers, he created a hoax video of WTC7 collapsing, and truthers overwhelmingly took the bait.[6] He came out as a paid government shill, inclusive of a $1,000,000 paycheck from Langley, Virginia,[7] and later, as a long-time crisis actor.[8] And, he made an ad for "TruthR" — the dating app for 9/11 truthers.[9]