The General Election of 2010 occurred on May 6th. The situation is frequently compared to the collapse of John Major's Conservative government in 1997, as the incumbent party has rendered itself pretty much unelectable. The outcome was expected to be a victory for the Conservative Party but there was increasing expectation of a hung parliament, which is what happened.

After a brief consideration of both major parties, Nick Clegg decided to team up with David Cameron.

In the UK voters vote for the party and not for the Prime Minister. In this election they will be fighting over a rather slim piece of centre-ground.

See the main article on this topic: New Labour

Traditionally characterized by socialist economics and pro-unionism. The Labour Party has moved towards the centre recently, incorporating economic and social policies from the right wing, and what they represent is now unclear. They offer cuts.

See the main article on this topic: Conservative Party (UK)

Traditionally characterized by free market economics and anti-unionism. The Conservative party has moved towards the centre recently, incorporating social and environmental policies from the left wing, and what they represent is now unclear. They also offer cuts.

See the main article on this topic: Liberal Democrats

The Liberal Democrat party offers something which they hope will break the mould of two party politics. The fact that they have been trying to do this since about 1948 fails to deter them.

Their cunning plan is to encourage voters to vote in equal numbers for each of the two parties while giving them just enough votes to hold the balance of power. They will then use this bargaining position to change the rules of British politics so that every parliament is a hung parliament in which they permanently hold the balance of power. Smart eh?

Irish, loyalist, right to far-right. Co-founded by fundamentalist preacher Ian Paisley when he was still a raging nutcase; has only moderated slightly since. Known for being extremely homophobic.

Guess what they are all about?

See the main article on this topic: Plaid Cymru

UKIP want to remove the UK from the European Union. They do not like foreigners and want to stop net immigration.

See the main article on this topic: British National Party

The BNP also want to remove the UK from the European Union. They do not like foreigners and want to pack all 'dem non-whites back where they came from, or even where their grandparents came from.

The Greens, despite having lots of good things to say, will get drowned out by the above parties. However, the people of Brighton have some sense, so they won one seat. [1]

Although the British like tea there is no tea party, and - given the state of British public finances - there will probably be no parties at all for the next ten years.

The Race to Number 10[edit]

Tories only four points ahead and might even lose!

All the party manifestos are out. The two main parties have gone for the communist poster/church hymn book look,[5] which makes a change from previous elections when parties stole slogans from Communist East Germany and Mussolini's Italy. All the main parties promise a fairer, caring society. The thoughts of Margaret Thatcher on this news are not printavailable, and the opinion polls show little change. Perhaps tonight's TV debate will shake up the bag; at least the mass replacement of televisions broken by thrown cups and pot plants will boost the economy.

Nick Clegg appears to have been the winner of the debate. One (surely aberrant) poll puts the Lib Dems on 35%. Meanwhile the BNP's accounts are being "investigated" by the Electoral Commission.

The Lib Dem boost from the debate continues. Two polls have them in the lead and another has them in a close third. Before any Lib Dem supporters get too excited, remember that the SDP/Liberal Alliance was over 50% in the polls at a similar stage in the 1983 and 1987 campaigns.

Labour and the Conservatives have continued to attack the Lib Dems, but the latest opinion polls show their support holding roughly steady. The Labour Party is rocked by savage criticism from a major sourceimg.

The Lib Dem surge can no longer be called a "bounce" without redefining the law of gravity. Two out of three new polls have them in the lead, and the third has them in second by 1%. In response to this, the Tories have announced a piece of Welfare reform to "end the free ride for those who fail to take responsibility." Most eyes are now on the next leaders' debate - on foreign policy - this Thursday. One late poll has the Tories with a 9 point lead over both other main parties. Resurgence or outlier?

ZOMG Clegg is a Nazi! Apparently he once said Britain's mentioning the war all the time was a bit overdone. Or something. And those party donations were "just resting in his account."

Someone throws an egg at David Cameron. His golden radiance causes it to hatch into a beautiful white dove, bearing an olive branch, bringing peace and prosperity to all the world, according to The Times.[citation NOT needed]

The second party debate (on foreign affairs) appears to have been won by Clegg and Brown. Or was it Clegg and Cameron? Perhaps it was Brown and Cameron. The Sun says Cameron won, but then it would. The final debate, on the economy, will make sense of things. Possibly.

The three sets of instant figures are:

It's worth mentioning that the former YouGov CEO and current YouGov board member, Nadhim Zahawi, is also a Conservative candidate in the coming election.[6] YouGov consistently show the Tories further ahead than other polls. Coincidence?

the BNP mainfesto reveals a sideline in Global warming denial. Their manifesto launch is attended by someone posing as that well-known Middle Easterner Saint George.

The Conservatives change tactics: sensing that the increase in Lib Dem support has left some Labour seats vulnerable, they decide to "decapitate" said seats.[7]

Grandmother asks Gordon Brown: "All these eastern Europeans what are coming in, where are they flocking from?" ("Flocking" being a behaviour commonly associated with animals.) Instead of saying "Eastern Europe", Brown answers reasonably but is caught later calling her a bigot.[8] The media and the innertubes get all excited and furious. Real people shrug and put the kettle on.

The BBC Newsnight programme has got a band to make a song for each of the three main parties. Which do you prefer?

Mervyn King, governor of the bank of England says that whoever wins the elction will have to take such drastic and unpopular measures to fix the economy that they'll make themselves unelectable for a generation.[9] Perhaps the parties should be haggling over who gets to be leader of the opposition...

The day after the final debate. Most people think Cameron won but it seems Clegg scored highest amongst undecided voters, which may be more important in next week's result. Metaphor of the day: a car crash 20 feet from Gordon Brown. Tony Blair, still bright orange, is pulled out of the cupboard to campaign in London.

Thus speaks the sage of our ageimg.

Labour start to lose their nerve. Some Ministers are asking voters to vote tactically

for the Lib Dems to stop the Conservatives gaining an outright victory[10] while Gordon Brown has decided to take the blame, whatever happens.[11] 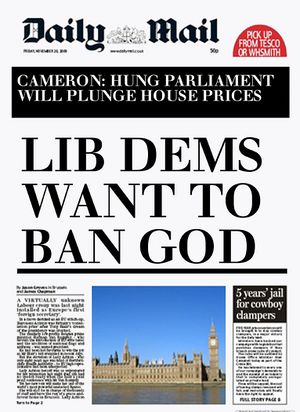 The final opinion polls still seem to point to a hung parliament, but since none of them measure what's happening in the marginal seats, they probably aren't much of a guide to exactly what will happen.

Tories insist on an honest campaign

It's the big day.

The BNP's website (www.bnp.org.uk) is replaced by the following message:[13]

A message from Simon Bennett due to the volume of phone calls and emails I am receiving:

If you are reading this message it is because they have set up their server incorrectly and this needs to be resolved by the new webmaster.

It is important to note that I have been working hard to negotiate a seamless switchover of the website, but for reasons unknown to me the leadership have chosen to force the domain from me, steal my work, data and systems and go it alone rather than paying for it. I will continue to work hard to try and resolve the situation quickly, professionally and amicably. This is in the hands of Nick Griffin and Jim Dowson, not me.

It should also be noted that they have decided to put a personal grudge against me before the interests of the party and its members. This was not a fight of my choosing.

The site is back now, worse luck.

The polling station at small Gloucestershire village of Slad is expecting a 100% turnout. How come? It's in the pub.

As predicted by absolutely everybody except Rupert Murdoch's bog paper (The Sun), a hung Parliament in favour of the Tories has occurred, and the parties must now haggle. Gordon Brown is still Prime Minister until a majority government can be formed, or until he's brought down with a vote of no-confidence. It could be days.

Meanwhile, User:Totnesmartin recuperates after a long night of beer, coffee and live blogging.