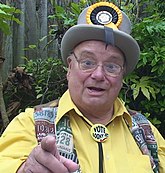 The Official Monster Raving Loony Party is one of the longest running jokes in UK politics, along with the Liberal Democrats. However, they are serious enough to have official membership at £9.99 per annum. David "Screaming Lord" Sutch founded the party in 1983, and it contrived to survive his untimely and lamented death in 1999. The word official is apparently in the party name in order to distinguish them from all the other loonies on the ballot.

They stand in prominent seats in general elections and in most by-elections, receiving no more than a handful of votes. Their most notable showing was in the 1990 Bootle by-election for a seat in the House of Commons vacated by the death of Labor MP Allan Roberts, in which Screaming Lord Sutch beat the Social Democrats by a few hundred votes; within a week the SDP's National Executive decided to give up and the party was finished.[1][2] On the surface their sole aim is to add a little colour into otherwise dull affairs, though their predictable clown-like shtick usually results in candidates who are at least as dull as the serious politicians they stand against. At the 2010 general election they stood in twenty seven seats and only came last in fifteen of them.[3]

The present leader of the OMRLP, Alan "Howling Laud" Hope, was the first party candidate elected to public office:

The party was not immune to feuding, with Lord Toby Jug

, who had stood several times for the Loonies, being expelled in 2014: Jug criticised Hope for racist comments, the climax of a disagreement between the Eurosceptic Hope and the Europhile Jug. (Jug was born Brian Borthwick but changed his name by deed poll owing to his resemblance to an ugly item of pottery).[4]

The party had another success on 1 August 2019 when it beat UKIP in the Brecon and Radnorshire by-election, a good symbol of how UKIP were on the slide into irrelevance.[5][6] At the 2019 General Election, another perennial comedy candidate Lord Buckethead represented the Raving Loonies in Boris Johnson's constituency of Uxbridge and South Ruislip, defeating wannabes Count Binface and Yace "Interplanetary Time Lord" Yogenstein, though not Boris Johnson.[7]

Despite the satirical and comedic nature of the OMRLP and the deliberate absurdity of their manifesto some of their policies have, eventually, become law. Notable among these are: