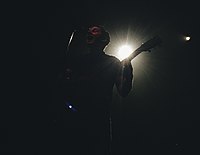 Ace just wants you to be happy

Yes, I did figure something like that might be the case after reading some of his counter-rebuttals (if they could be called that) and the dates of the last ones before mine.

No problem - it looks like you're new around here - maybe I was a little quick to jump on your edits. Why don't you sign up and get yourself a user name, we're pretty friendly once you get to know us. Jack Hughes (talk) 12:51, 8 February 2011 (UTC)

You has it back. Wëäŝëïöïď

Am I still topping the charts?[edit]

You haven't invented your own religion - complete with 300 pages of scripture -and, now you've returned, you've been somewhat less dogmatic. I see you haven't told WfG that she's an immoral woman who doesn't understand the issues - you would have done so a year ago.
So, sweetie, I think you're mellowing. Does this mean you've found a lover (please say yes)? Jack Hughes (talk) 20:55, 9 August 2011 (UTC)

The scripture reference refers to User:Maratrean who is... a trifle bizarre. And, no, my pretty one, of course you were never dogmatic ("authoritative and unchallengeable" according to dictionary.com). Oh, how you make an old man smile. Jack Hughes (talk) 21:31, 9 August 2011 (UTC)

Sorry to see you go.[edit]

If you are retired, that's unfortunate. I thought you were pretty pleasant and interesting.--