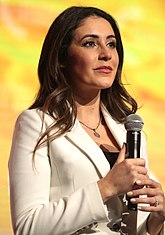 Anna Paulina Luna (1989–) is an Instagram model turned political commentator turned congressional candidate. She has worked for conservative organizations like PragerU and Turning Point USA in the past. In 2020, she challenged incumbent Charlie Crist's congressional seat in Florida's 13th district.[2] Since then she has appeared as a commentator on Newsmax segments.

She was born Anna Mayerhofer in 1989 and was raised predominantly in southern California. She claims to have grown up in a broken home and that much of her childhood was plagued by poverty, addiction and disease. After a tumultuous upbringing, she joined the Air Force shortly after graduating high school.[3] While serving in the military, she would meet her future ex-husband. After her marriage ended in divorce in 2012,[4] she went on to pose provocatively in mens' magazines. Not satisfied with merely being eye candy, she entered the world of political commentary in the mid 2010s — ultimately landing gigs with Dennis Prager and Turning Point USA. In true news babe spirit, she would quickly realize how lucrative grift, spreading misinformation, and regurgitating tired talking points could be. The rest was history.

Marketed as the Republican answer to the then newly-elected congresswoman Alexandria Ocasio-Cortez, she launched her bid for Florida's 13th congressional seat in 2019[5]. With some help from Florida congressman, Matt Gaetz, she secured 47% of the vote, but ultimately lost the election.[6]

Throughout the campaign trail, she offered very few specifics in regards to particular policy prescriptions. It is known that she supports the following:

And that she opposes the following:

In all likelihood, she probably hasn't thought long and hard about any of the issues that she speaks about.

Taking a page straight out of Dave Rubin's playbook, she claims to have been a staunch Democrat and avid supporter of Barack Obama prior to waking up and realizing how backwards and brainwashed she had been.[7] However, in a now deleted tweet from 2021, she confessed to never having voted for him in either presidential election.[8] How avid of an Obama supporter could she really have been if she didn't even vote for the guy?

The goal of this organization appears to be in direct conflict with its tactics. For example, they claim that contrary to what the mainstream media says, most Latinos actually support Trump and are generally conservative. They even have plenty of tokens that are willing and ready to provide moral cover for Trump whenever charges of racism are hurled. However, if it is in fact true that most Latinos are conservative, deporting more Latinos would actually make it harder for Republicans to get elected. Then there are the endless cries of how immigrants from Mexico are flipping red states like Texas and Arizona blue. If most Latinos are conservatives, then how would that even be possible?

Luna also pays lip service to some QAnon talking points such as "save the children" and insinuates that less stringent immigration policies would result in more human trafficking.[10]

As part of her Fox News audition tape hard-hitting journalism, she attempted to catch future vice president, Kamala Harris, in a gotcha moment while harassing her at an airport in April, 2019.[11] Kamala Harris has been an outspoken critic of immigration policies that separate children from their parents. It was Luna's contention that ending those policies and ensuring that families are no longer separated would be exploitive to immigrants. Yes, apparently not having your family broken up is the REAL tragedy.

One of the consequences of running for public office is that the personal details of many candidates will get placed under a microscope in order to determine if they're trustworthy or not. The case of Anna Paulina Luna is no exception. In April of 2019, Anna Gamberzky (still using her ex-husband's last name) legally changed her last name to "Luna." Luna claims that her decision to adopt a new last name was sparked by a desire to share the same last name as her mother. However, it was noted by Tampa Bay Times reporter Josh Solomon, that her mother's last name actually is not Luna.[12] When pressed further, she pivoted and claimed that her name was changed actually more out of respect for her ex-husband's privacy.

As part of a PragerU series starring herself called Americanos, she claimed that both of her parents were born in Mexico. However, she has said on several different occasions that she is only half Hispanic.[15][16][17] Her father's voting record in Okaloosa County, Florida revealed that he is listed as a caucasian male.[18]

Her unwillingness or inability to answer basic questions about her own identity have led many to speculate that she may have completely fabricated a faux Latina persona purely out of convenience. Legitimate questions and concerns are routinely written off by her as nothing more than lies perpetuated by haters, trolls, and people who are just jealous or part of the Deep state.

While it is verifiably true that Anna has served several years in the Air Force, it is not clear in what capacity she served. Her military career has been a major selling point for her and she frequently posts provocative pictures of herself dressed in combat gear while carrying assault rifles.[19] A closer look at her military photos reveals that the part of the uniform where it displays a solider's name, it's blurred out - presumably in an attempt to conceal her former last name.[20] She often refers to her ex-husband, who she claims received a purple heart and a bronze star, as her current husband. They actually divorced in 2012 but that certainly doesn't stop her from riding off of his coattails.