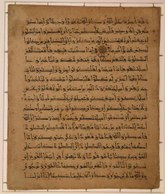 The Women (An-Nisa) is the fourth sura of the Qu'ran. And surprise surprise, it ain't no feminist tract.

The sura says that sons should inherit twice as much as daughters Allah enjoins you concerning your children: The male shall have the equal of the portion of two females, Women:11; and states that if women are found to be "guilty of lewdness", the correct punishment is to "confine them to the houses until death takes them away or Allah opens some way for them." Luckily, a whopping four men are required to witness this lewdness and testify on it. (Qur'an 4:15)

At the same time, you are not to just take things away from women, not take them against their will (Qur'an 4:19)[note 1]

Though women are property, nowhere in this Sura does it advocate dismembering much less honor killings, regardless of the "Qu'ranic justification" supposedly offered for those acts.

Women are as unclean[note 2] as using the restroom: …do not go near prayer… if you are sick, or on a journey, or one of you come from the privy or you have touched the women (Qur'an 4:43).[note 3]

The Women allows polygamy though only where the husband's demeanor and finances allow him to care for all those he marries and their children (Qur'an 4:3). The Women also contains instructions on exchanging one wife for another, as long as you provide for the first in proper gold and steal nothing from her.[note 4] (Qur'an 4:20)

One verse of the sura was quoted by Osama bin Laden in his letter to America following 9/11:[1]

The sura contains discussions of Jesus and his human nature (as opposed to the supernatural sense that Christians claim), and establishes that the Crucifixion was faked: "and they did not kill him nor did they crucify him, though it appeared to them so… But Allah took him up unto Himself. Allah was ever Mighty, Wise." (Qur'an 4:157-168)

This Islam-related article is a stub.
You can help RationalWiki by expanding it.