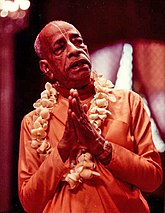 The International Society for Krishna Consciousness, also known as the Hare Krishnas (or in pop culture, "those annoying guys that used to bug you at the airport"), is a "new religious movement" founded in New York City in 1966 by A. C. Bhaktivedanta Swami Prabhupada.[1] It is based on Hinduism, Krishna being a Hindu god. It has been branded as a "cult".

One narrative about the cult is that the Swami was a genuine (if possibly a bit naive) and honest guru who had authentic teachings to impart, but that the group which formed around him included exploitative cynics, interested only in gaining and consolidating worldly power. Apparently, one chief cabalist was mainly in it for the great Indian cough medicine buzz.[2] One thing led to another…

Although ISKCON has thus been represented as having 'gone astray',[note 1][3] its often bizarre beliefs and exploitative or abusive practices actually find support in A. C. Bhaktivedanta's many books and recorded talks. Among the 'purports' he wrote to accompany the Srimad Bhagavatam he condones rape[note 2] and encourages child marriage,[note 3] and he encouraged deception and considered anyone who disagreed with him as "envious," demonic and deserving of destruction. Present day believers condemn rape[4] and formed a worldwide child protection office to prevent child sex abuse in their community.[5] ISKCON remains however a "woman-fearing, woman-hating, woman-exploiting institution", primarily because the leadership structure is and has been the exclusive domain of men.[3]

In other instances he suggested that eventually his followers would fight and kill non-believers, using an analogy with Islamic jihad.[note 4][note 5]

Despite their wholesome hippie image of sandal-wearing vegetarians who like nothing more than wandering through the streets chanting and hitting drums, ISKCON have some rather socially-regressive views on sexuality. Though there are LGBT-affirming trends within ISKCON, the general attitude towards homosexuality is that it goes against the teachings of Krishna. The pop star Boy George was rejected by the group because of his sexuality and told that he must either become celibate or marry a woman.[6]

That said, it isn't just gay sex they don't like: non-procreative heterosexual sex is bad too.[3] Not big fans of sex in general then. Rather a strange religion for the authors of "Love You Do", no?