Love jihad (also known as Romeo jihad) is a moral panic conspiracy theory that is most prominent in India, in which Muslim men are coordinating to hoodwink Hindu women so as to convert them into Islam and eventually achieve a major demographic change.[1] 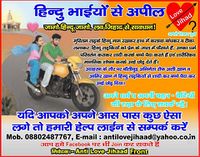 What’s interesting about this theory is how it deviates from the usual Islamophobic stereotypes of how Muslims are hateful savages who destroy while the strong Hindus protect their trillion year old culture. Meanwhile here, Muslims are portrayed as some handsome and strong Chads who are instantly able to seduce any hot Hindu women in a 10 mile area by offering them a ride on their bikes. 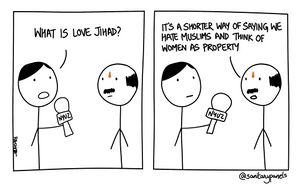 This rhetoric also enforces the misogynist views presenting women as innocent, helpless, naive victims who lack authority and agency, and hence should not be allowed to marry someone from another faith and must be viewed with suspicion if they do.[4] The conversion of women is also punished more severely in Uttar Pradesh’s love jihad law (sponsored by Yogi Adityanath) to "give justice to women," taking the exact same presumption as described above.[5]

Love jihad laws have ushered in all over India in several BJP states. They have all come after Narendra Modi took office. First, it was Uttrakhand in 2018, then Uttar Pradesh and Madhya Pradesh in 2020, and Gujrat in 2021.

How the state would determine that conversion was the 'sole purpose' of the marriage is left unclear.

Basically, even if the woman said she is changing her faith willingly, it is up to the husband to prove his innocence. 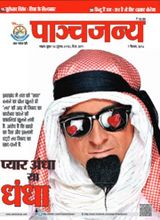 From Panchjanya, the weekly mouthpiece of the Rashtriya Swayamsevak Sangh. The title reads, "pyar andha hai ya dhandha" (is love blind, or a business?)

The love jihad laws in Uttar Pradesh have been compared to anti-miscegenation laws in other countries; such as the Nuremberg Laws in Nazi Germany, which banned marriages between Jews and those of “German blood,” and the laws in Apartheid-era South Africa which prevented marriages between its four racial classifications (White, Coloured, Indian, and Black).[6] While the Uttar Pradesh love jihad law does not outright ban interfaith marriages, forcible conversion is already outlawed by the Indian Constitution, and the right to privacy, right to marriage, and the right to practice a religion or faith of one’s choice preclude any interference by the state, the courts, the police, Hindu far-right goons and even the families of the couple.[5]

The laws also make it frighteningly easy and efficient for Hindutva goons to harass and intimidate interfaith couples. The Special Marriage Act requires a couple to give a 30-days notice before the marriage is registered, which is then publicly displayed “conspicuously”[7] on the notice boards of registration offices. These contain names, address, occupations and photos of the couple. This allows personal information to easily spread across social media, effectively a form of doxing.[8]

a non-profit news website known for its undercover investigative journalism, revealed the coercive tactics used by Hindutva groups to intimidate and harass interfaith couples,[9][10] such as threatening, blackmailing, lynching and drugging.

Ironically, Hindu far-right groups themselves perpetuated and supported love jihad when done for their own religion (Reverse love jihad),

justifying it by saying…

In many cases, the police were making arrests before investigation. In January 2021, Uttar Pradesh, three Muslim men had charges dropped against them and the FIR expunged because the complaint was found to be fake.[13] In December 2020, UP police stopped a Muslim wedding, jailed the couple and assaulted the groom in custody on suspicion of love jihad. They were only released after the bride's family proved that she was a Muslim by birth, not by conversion.[14]

In December 2020, in the BJP-ruled Uttar Pradesh, a Muslim man named Shahid Mian complained to the police that his daughter, Alisha, was kidnapped by a Hindu named Siddharth Saxena. After the investigation, it was found that the marriage took place before the law was put into effect and the girl testified that she married on her own will. Hence, the case was closed without any arrest and the woman was dropped at her husband’s house.[15]

In almost all cases, it is the conservative household that files love jihad complaints, not the supposed victims. Arranged marriage

is a prevalent culture in India, and most marriages occur within the same caste and religion. So love marriages, especially outside one’s caste or religion, are extremely uncommon and aret detested by many.

part of the youth-wing of the Vishwa Hindu Parishad, forcibly dragged an interfaith couple of a Hindu bride named Muskan and a Muslim groom named Rashid on their way from the Moradabad

district court after registering their marriage.[15]

) against Rashid under the new love jihad ordinance. In this case, too, the marriage had taken place before the law was put into effect and the girl clearly said she married on her own will. However, this time, Rashid and his brother were arrested and jailed and the bride was forcibly escorted to be dropped at a shelter home for destitute women.[15] This became the first arrest made under the new Uttar Pradesh’s love jihad law.

Muskan suffered a miscarriage after 5 days at the shelter. “I held my baby for a few minutes before letting it go down the toilet” she stated “They killed my baby.”[16]

“I gave my son and daughter names that could pass for generic (pan-Indian and pan-religious) ones: Aryan and Suhana. The Khan has been bequeathed by me so they can't really escape it. I pronounce it from my epiglottis when asked by Muslims and throw the Aryan as evidence of their race when non-Muslims enquire. I imagine this will prevent my offspring from receiving unwarranted eviction orders and random fatwas in the future. It will also keep my two children completely confused. Sometimes, they ask me what religion they belong to and, like a good Hindi movie hero, I roll my eyes up to the sky and declare philosophically, "You are an Indian first and your religion is humanity," or sing them an old Hindi film ditty, "Tu Hindu banega na Musalmaan banega — insaan ki aulaad hai insaan banega" set to Gangnam Style. None of this informs them with any clarity, it just confounds them some more and makes them deeply wary of their father.

—Shah Rukh Khan, a famous Indian actor, on him being a Muslim and how he became an "inadvertent object of political leaders"[17] 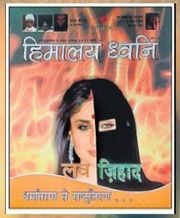 A popular source for love jihad claims comes from cherry-picking some celebrity interfaith marriages where a Muslim man marries a Hindu woman. Commonly circulated examples include:[18]

This ignores the many instances where the opposite has happened; where a Hindu man marries a Muslim woman.[19] Such as Saif Ali Khan's

husband is a Hindu, Hrithik Roshan

is a Hindu and his wife was a Muslim, Suneel Shetty's

wife is also Muslim, and so is Manoj Bajpayee's

wife is a Muslim while he is a Hindu. 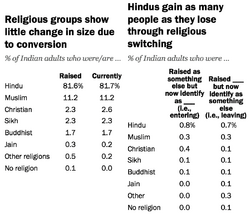 About all of the evidence for the urban legend of love jihad rests only on isolated incidents with a stroke of communal colour to allege a grand conspiracy against non-Muslims. However, it does not stand up to statistical scrutiny.

Interfaith marriages in India are just about 2.2% of all marriages.[20][21] And even among those interfaith couples, the highest percentage was among Christians and Sikhs, not Hindus. A number of studies conducted by research scholars have found that interfaith marriages have limited impact on society at large. According to the Pew Research Center, religious conversion has had very little impact on the demographics of religious groups; in fact, more people have converted into Hinduism than left it.[22]

In October 2018, the National Investigation Agency

(India’s counter-terrorist force) found no evidence of a larger criminal design of forceful conversion and closed the Supreme Court-ordered investigation.[23] Even the central government has denied love jihad in the parliament.[24]

Numerous other Indian states repeatedly probed alleged cases of love jihad from several different agencies and have found the exact same results each time;[25] such as Karnataka's CID

In fact, the BJP themselves admitted that they had no data or any proper definition available on love jihad.[34]

And yet, the myth persists, even when the concerns are directly dismissed by the supposed victims.

It is abundantly clear that the fear mongering over love jihad was not to raise awareness against forced marriages, or to protect Hindus either; but simply a manufactroversy to capitalise on the disdain of the largely conservative and Hindu population of Uttar Pradesh and other states for interfaith marriages and to further stoke already strong communal tensions.