The BJP's logo and election symbol.

The Bharatiya Janata Party (BJP, literally "Indian People's Party"[1]) is a right-wing[2] Hindu nationalist and socially conservative political party in India. The BJP and its associated organizations often mix mythology with history and religion with science in their politics and public policies.[3][4][5][6]

The Parent organisation of BJP is Rashtriya Swayamsevak Sangh (RSS), a far-right, paramilitary organization advocating Hindutva, which was banned on three separate occasions, once after Mahatma Gandhi's

assassination (for which one of their members was responsible), and most recently after they razed the Babri Mosque

BJP has the highest number of elected officials with cases for crimes against women, including rape.[23] 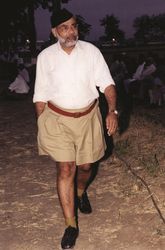 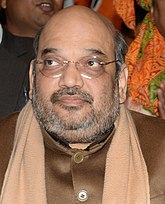 Shah thinking about how to spread more propaganda.[25]

See the main article on this topic: Narendra Modi

Modi is the current Prime Minister of India having served since 2014.

See the main article on this topic: Yogi Adityanath

is currently serving as the Minister of Home Affairs. He served as the President of the Bharatiya Janata Party (BJP) from 2014 to 2020. He is the chief strategist of the BJP and a close aide to Narendra Modi.

serves as the Finance Minister under the Modi government. She was found to have asked an astrologer to help her make financial decisions for the whole country.[citation needed]

serves as the Minister of Women and Child Development under the BJP. She has advocated child abuse.[citation needed] Her educational qualifications were found to be forged.[citation needed]

serves as Narendra Modi's spokesperson who represents his party on television debates and has mastered the art of Ad Hominem attacks[26] and baseless propaganda.[27]

is an elected BJP MLA who was convicted of rape, murder, attempt to murder, criminal conspiracy and criminal intimidation for raping a minor and killing the victim's father in police custody, murdering two aunts and paralyzing the victim's lawyer after two years, when a truck rammed into the car they were travelling in.[28]

is a member of Parliament and accused terrorist, who for a brief period was appointed as a member of the Defence Committee before being dismissed for calling Gandhi's murderer a "Patriot".[29] She was accused of taking part in the 29 September 2008 western India bombings

and his two sons, aged 11 and 7, were burnt alive by a group of men with links to the Bajrang Dal, an affiliate of RSS while they were sleeping inside a Station Wagon. Sarangi was chief of the Bajrang Dal at that time.[32]

In 2019, he contested the election and is currently a Minister under BJP.[33]

In 2015, Shankarbhai Vegad, a BJP politician and a Member of Parliament, claimed that cow urine and cow dung can cure cancer.[34] He said:

In 2019, During an election rally BJP MP and small-time terrorist Pragya Singh Takur claimed that a mixture of cow urine and other cow products cured her breast cancer. She also underwent bilateral mastectomy procedure, but she's pretty sure it's the cow urine that worked.[35]

In 2017, the education minister of the Indian state of Rajasthan

Vasudev Devnani claimed that the cow is the only animal that inhales as well as exhales oxygen.[36] He underscored the 'scientific significance' of the cow by saying:[36]

In 2018, the animal husbandry minister of the Indian state of Uttarakhand

Rekha Arya repeated this claim. She said that the cow is the[37]

Of course, plenty of oxygen-breathers exhale oxygen. When humans breathe air, it's about 21% oxygen; about 16% of an exhale is oxygen.[38] Sorry, Rekha Arya; cows just aren't as special as you think they are.

cows contain gold, and the hump is responsible for the production of gold.

BJP affiliates and politicians like Swami Chakrapani and Suman Haripriya claimed that drinking cow urine and applying cow dung on the body can cure coronavirus.[40][41]

In 2020 October, Rashtriya Kamdhenu Aayog (Commission for Cow) chief Vallabhbhai Kathiria unveiled a chip made from cow dung which he claimed will protect from cell phone radiation.[42]

Foreign cows are our aunties[edit]

In 2019, BJP leader Ranjit Bahadur Srivastava had an interesting theory about Muslims, Cows and Love Jihad.[44]

Vote for BJP to kill all Muslims[edit]

Muslims and Christians wiped out of India by 2021[edit]

See the main article on this topic: Mohenjo-daro

who is thought to have lived around the 2nd century BCE, conducted a nuclear test:[48][49] He said,

So, according to his argument, the Trinity, the nuclear test conducted in 1945 was not the first nuclear test. An ancient Indian sage who lived 4,000 years ago conducted a nuclear test far before Trinity. That seems batshit crazy perfectly sensible.

In the Indian epic Mahabharata,

is described as having been born to an unmarried woman. In 2014, India's prime minister Narendra Modi, while delivering a lecture in front of a group of doctors and other professionals, said that Karna's birth outside his mother's womb is the proof of the existence of genetic science in ancient India:[50]

is a well-known Hindu deity. His body is that of a human and his head is that of an elephant. In 2014, Indian prime minister Narendra Modi suggested that this could be possible because an ancient Indian plastic surgeon transplanted an elephant's head on the body of a human being.[50] Yes, this was the prime minister. People like this are in charge all over the world.

In 2020, The BJP politician and Governor of West Bengal, Jagdeep Dhankhar, claimed that flying objects existed during Ramayana

days and Arjun's (a character from the book) arrowhead had nuclear power.[51]

In 2020, BJP politician and the Lieutenant Governor of Puducherry

tweeted a video claiming that the Sun chants the Hindu symbol Om.

Astrology is the topmost science[edit]

On the same occasion, he also said:

In 2020, BJP leader and Gujarat Assembly Speaker, while addressing the "Mega Brahmin

Business Summit" (basically an Indian version of a white supremacist meeting) said Brahmins have different DNA while adding that most Nobel Prize winners from India are Brahmins.[54]

He didn't miss the opportunity to make another racist remark:

In 2014, A year after a massive flood hit the state of Uttarakhand, Union Water Resources Minister Uma Bharti explained the underlying cause of the flood — atheists shitting near the shrine.[55]

People who feel unsafe in India should be bombed[edit]

As a response to the criticism of growing violence across the country, elected BJP MLA Vikram Saini said:

See the main article on this topic: Albert Einstein § Myths

Darwin was wrong about evolution[edit]

Satyapal Singh, minister of higher education in India, demanded the theory of evolution be removed from school curriculum because no one “ever saw an ape turning into a human being” “I have a list of around 10 to 15 great scientists of the world who have said there is no evidence to prove that the theory of evolution is correct,” Singh told a crowd at a university in Assam state, adding that Albert Einstein had agreed the theory was “unscientific”.[59]

Children who eat eggs will turn into man-eaters[edit]

In 2019, as a reaction to state government's introduction of eggs in mid-day meals at Anganwadis

BJP politician Subramanian Swamy, who was responding to a question about the picture of Hindu God Ganesha on Indonesian currency said,[61]

Blow a conch and bathe in mud to build immunity[edit]

When not promoting bigotry and instigating riots, BJP leaders give health advice to the people. In August 2020, BJP MP Sukhbir Singh Jaunapuria shared a video on Facebook in which he advised his people to — blow a conch, bathe in mud and eat leaves from various plants — to build immunity from COVID.[62]

He then offered a solution to feed the tigers with deer from the zoo, even though they are considered vulnerable by IUCN.

Women must live within limits[edit]

See the main article on this topic: Blaming the victim

In the wake of 2020 Hathras gang rape and murder

BJP MLA from Ballia, Surendra Singh said that such incidents can be stopped if "parents inculcated good values in their daughters".[64]

Modi sleeps for only 2 hours every day[edit]

Maharashtra BJP chief Chandrakant Patil had to say this about his Supreme Leader.

What their leaders do[edit]

Pouring water over a globe to reduce global warming[edit]

Beyond Hindutva and bigotry, BJP followers are also concerned about the environment and contribute a lot toward its protection with the help of woo. In 2018 BJP's National Secretary H. Raja

poured water over a plastic model of the globe while chanting spells to reduce global warming.[65]

To please the gods of rain, Lalita Yadav, minister of state for woman and child development in Madhya Pradesh organized a frog wedding and married off two frogs.[66]

In November 2020, Madhya Pradesh Chief Minister Shivraj Singh Chouhan announced that the government is going to form a "Cow Cabinet" for the welfare of cows.[67]

Just few days after announcing "Cow Cabinet", the Madhya Pradesh government announced that they were planning to impose a cess (tax) to generate money for running cow shelters.[68]

See the main article on this topic: Love jihad

In November 2020, governments of Uttar Pradesh[69] and Madhya Pradesh,[70] both under BJP rule announced that they are going to form new laws against "Love Jihad", a phenomenon for which even the National Commission of Women (a government body under BJP) says they don't have data.

In November 2020, Narendra Modi, who has claimed that plastic surgery was practised in ancient India, fulfilled one of his fantasies by permitting Ayurvedic practitioners to conduct surgeries.[71]

In January 2021, the Cow Commission announced their decision to conduct a nationwide exam to infuse curiosity about Indian bovines among citizens, the one they lovingly call "Gau Mata". The study material released, purports Gau Mata as superior to foreign cows. It claims that various diseases can be cured with by-products of cows. The claims range from earthquakes happening as a result of cow slaughter to the existence of gold in the milk of Indian cows.[72][73]

A day after the news of Chinese villages in territories claimed by India broke out, Gujarat Chief Minister Vijay Rupani announced that they are renaming Dragon Fruit to "Kamalam" (since dragons are associated with China).[74] Never mind that dragons are not specific to China, nor that dragon fruit originated from the Americas.[75]

BJP IT Cell a.k.a WhatsApp University[edit]

Amit Shah, BJP Chief Strategist, Minister, and former president of BJP, claimed that BJP could make any message, whether real or fake, go viral.[76] BJP IT Cell is a group of paid workers who spam the internet with pro-Modi propaganda and hijack online polls.[77] It is jokingly called WhatsApp University due to their extensive use of the messaging app WhatsApp to spread propaganda.[78] IT cell is known for generating Twitter trends about boycotting famous people who criticize the government.[79]

On January 6th, 2022, a disgruntled BJP IT cell worker became a whistleblower by revealing the existence of a secret app only for IT Cell workers, called ‘Tek Fog’, that allows them to bypass reCaptcha codes and mass-upload texts and hashtags. It gives IT cell workers a daily target to manipulate social media trends and hijack the ‘Trending’ section on Twitter and the ‘Trend’ section on Facebook. By exposing this content to a more diverse audience on the platform, it makes extremist narratives and political campaigns appear more popular than they actually are. Another feature of the app enables app operatives to ‘auto-reply’ to individuals or groups by connecting a Google Sheet or by auto generating keywords and phrases, a vast majority of which are abusive or derogatory.[81]