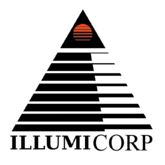 The new and improved not-actual-logo of the illuminati. So modern, so cool, so hip. Note, this logo is just a RIP of the old Electronic Arts logo from the 1980s. Actually, it looks like it's from the 80's.

IllumiCorporation.com was a scam website preying on the wallets of conspiracy theorists and cranks. It appears to be (to nobody's surprise) defunct. Alternatively, IllumiCorp is a satirical spoof video made by a Canadian filmmaker Matt Anderson.

The video was made in August of 2010 by a Canadian filmmaker Matt Anderson with the actor Arthur Roberts.[1] Matt Anderson did admit that the video was just a parody[note 1] and not a-super-secret-elite-training-video-made-for-the-Illuminati. Unsurprisingly, conspiracy theorist claimed that the IllumiCorp video is definite "proof" of the existence of Illuminati[2] despite the fact it's a parody.

Whilst the video was just an innocent spoof taken out of context by cranks, the website (which Matt Anderson is most likely not a part of) is a massive scam taking advantage of the paranoid. The website was created about three years after the creation of the original video and the creator of said website is Ainsley Knight.[3] The website advertises itself as having connections to the original Bavarian Illuminati[4] despite not showcasing any evidence to prove their radical claim.[note 2] You can become a "member" of IllumiCorp if you pay them anywhere from $29.99 to $399.[note 3] On a side note, the website doesn't start with https and doesn't have a padlock in the search bar so it isn't secure with banking information... Another reason to avoid that website and not buy anything.

Ainsley Knight is not only the creator of IllumiCorporation.com, she also is connected to many other scam/crank sites. Most peculiarly, she is the creator of The Knight Company website which is a website with zero conspiracy content. The CEO of The Knight Company (Righ Knight) has confirmed that he and Ainsley Knight were together at one point but sadly separated in 2010. In an e-mail he sent to a skeptic, he stated:

"Hi [Name] and Thanks for reaching out.

I apologize for the confusion and I am not sure what to tell you for most of what you asked,

But I can assure you that Ainsley and I were married but separated in 2010,

Ainsley has apparently purchased a lot of domain names and made many websites.

But these are all managed by Ainsley and owned by her.

As I said, I update the 3 sites above from time to time,
but any other sites she owns or has re-directing, or facebook pages is beyond me.

I hope I have been of some help.

Sorry for the confusion.

May I ask what type of agency you work for?

On the main page of IllumiCorporation.com, there is something called "The Official Network" which is a collection of even more scams.

IllumiCorporation.com, and everything associated with it, is just another attempt to benefit from conspiracy theorists and cranks. It's best to stay away from those sites and if you ever come across something similar to this, always take it with a grain of salt. Furthermore, Although the website is from Canada and the original video was made by a Canadian, that doesn't mean that Matt Anderson is a part of the website because remember: