Rigby was murdered by two Islamic extremists, Michael Adebolajo and Michael Adebowale. The iconic image related to the crime was a video made by a passer-by, in which Michael Adebolajo, bloody-handed and holding a knife and meat cleaver, delivered a speech.

Besides its obvious brutal and cruel nature, the attack proved once again that there is no senseless act of violence that fails to attract swarms of demented crackpots.

Michael Adebolajo reportedly came from a Christian family but converted to Islam after attending the University of Greenwich, where he studied from 2003 to 2005. His extremist activities prior to the murder allegedly included taking part in al-Muhajiroun demonstrations.[2] He also delivered a speech at a Unite Against Fascism rally in 2009, although this appears not to have been officially endorsed by the organisation.[3] In 2010 he was arrested in Kenya, while making an apparent attempt to train with Somali militants connected to al Qaeda.[4]

In a police interview, Adebolajo revealed that they decided to murder Rigby because he was wearing a top showing the logo of Help for Heroes, a charity that supports ex-servicepersons. The two killers also stated that they hoped to be shot dead by the police and thereby become martyrs; they were instead arrested, and found guilty in December.[6]

On 26 February 2014, Adebolajo and Adebowale were given whole-life and life sentences respectively.[7] 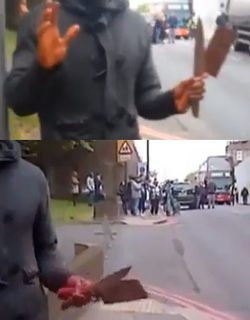 Comparison between two videos of Adebolajo's speech; the one above purportedly shows him without blood on his hands. In fact, the blood has merely been changed from red to orange, as have the bus in the background and the lines on the road.
See the main article on this topic: Conspiracy theory

As is often the case with terrorist atrocities, conspiracy theorists began arguing that the crime was a false flag operation. One piece of evidence that they cited was a second video of Adebolajo's speech, in which his hands appeared to be bloodless, and had also taken on a strange orange hue.[8] However, this is a simple matter of colour alteration: it is not just Adebolajo's hands which have switched from red to orange, but also the other red elements on the video.[9] Whether this is the accidental result of low-quality footage or a deliberate attempt to forge evidence is unclear. It may also be edited for broadcasting.

Another argument is that, if the man had been decapitated, then there would be more blood on the ground.[10] The flaw here is that the victim wasn't decapitated — this idea came from an early, unconfirmed report, and later reports described the attack as an attempted beheading.[11] It seems entirely plausible that any blood from the victim's injuries are obscured by view by his body.

Some have also pointed out that Michael Adebolajo talks about "our lands", despite having a London accent.[10] Clearly, however, he is referring to countries populated by his fellow Muslims, rather than his literal country of birth.

Amongst the conspiracy theorists who were involved was an Islamic student group at the London Metropolitan University, which promoted a video entitled "Woolwich false flag bullshit. Masses are in a state-sponsored trance" alleging that Masons were involved.[12]

The English Defence League responded to the murder by holding a demonstration outside Downing Street. The group's leader Stephen Lennon raised more than £3,300 for Help for Heroes, a charity which Rigby supported, but this was turned down on the grounds that Help for Heroes wishes to remain non-political.[13][14] Some of the EDL's critics decided to set about raising £3,300 for the charity themselves.[15]

Meanwhile, certain commentators argued that the EDL was exploiting Lee Rigby's death. Amongst these was the hacker group Anonymous, which leaked out the names and addresses of EDL donors as part of a stated effort to carry out "the systematic and comprehensive decimation" of the group.[16] Unite Against Fascism, meanwhile, opted to hold a rally opposing the EDL. Amongst the speakers to be invited was Shakeel Begg, a supporter of Islamic terrorists.[17]

During the trial of the two killers, one EDL protestor — reportedly Alan Furniss — decided to honour the memory of the murder victim by showing his backside on national television.[18][19]

A group called Woolwich Strong, chaired by Joshua Bonehill, was set up in the wake of the attack; it took its name from Boston Strong,[20] a benefit concert held after the 2013 Boston bombings.[21] Bonehill is one of the organisers of a clone group called Manchester Strong; also involved in this outfit is "Fusilier Cxf Boffy", a man who has been known to make approving references to Adolf Hitler and David Lane on his Facebook page, and whose real name is reportedly Kris Bothwell.[22]

After Woolwich Strong was condemned by the Facebook group Still Laughing at the English Defence League, Bonehill and a friend developed a plan to get revenge by putting together a fake chatlog to make it look as though SLATEDL supported the murder of Lee Rigby.[23]

On 5 June, the al-Rahma Islamic Centre was destroyed in a fire, the causes of which are unknown. A piece of graffiti saying "EDL" that was seen on the building led to speculations that the fire was a deliberate arson attack, possibly in response to the Woolwich murder.[24][25] The EDL officially denies any involvement, and its Twitter account suggested that the owners of the building destroyed it deliberately as an insurance job.[26] Meanwhile, various EDL supporters such as Jemma Hines expressed hope that more Islamic centres would be similarly destroyed, or showed disappointment that no Muslims were inside the building when it burnt down.[27] Paul Telford, who acts as bodyguard to BNP leader Nick Griffin, also celebrated what he believed to be an arson attempt: "islam [sic] u [sic] av [look, you get the idea] brought it on your self", he said.[28]

Response of Lyn Rigby, mother of Lee.
See the main article on this topic: Britain First

In another attempt by the far-right to appropriate the tragic murder of Rigby as a valid excuse for racism, pressure group and "political party" Britain First registered the slogan "Remember Lee Rigby" for their 2014 European Election campaign. The chair of the Electoral Commission soon apologised for any offence that the crass slogan may have caused,[29] and Britain First fascist loon chairman Paul Golding himself even apologised later for any upset it may have caused Rigby's mother, but felt the party were excused because Rigby was a soldier, as if that makes it less insensitive.[30] Despite this collective guilt, Britain First are continuing with the campaign.