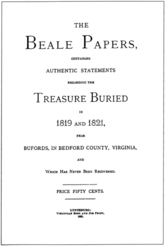 The Beale ciphers are several coded messages, originally published in an 1885 pamphlet. This pamphlet purports to tell the story of frontiersman Thomas Beale, who (along with his party) mined quantities of gold, silver and jewels (currently worth approximately $38 million), transported them across the country on wagons and/or pack mules, and buried them in a underground vault somewhere in Virginia. The ciphers themselves (allegedly) contain exact instructions, in code, to this vast treasure.

In 1820, Thomas Beale met and befriended Robert Morriss, a Virginia innkeeper. When Beale and his party left to go mining and exploring in 1822, he left a strongbox with Morris for safekeeping. Over the next few months, Morriss received several letters from Beale, recounting the party's exploits and instructing him not to open the strongbox until 1832. No further letters arrived, and neither Beale nor any of his associates was ever heard from again.

When Morriss finally opened the strongbox in 1845, he discovered three encoded ciphers. One listed the location of the hidden treasure, one listed its contents, and a third listed the names of the people who had claim to it.

Morriss was never able to solve any of the ciphers. In 1862, he shared the ciphers with the pamphlet's author (who officially remains anonymous, but may well be its copyright holder, J.B. Ward). This author was finally able to crack the cipher containing the vault contents, but (conveniently) neither of the others. After Morriss' death, the pamphlet containing the ciphers was published and sold for 50 cents (roughly equivalent to $15-20 today). Hundreds of people have tried to crack the ciphers and get the treasure since; none is known to have succeeded.

The second cipher can be cracked by taking the United States Declaration of Independence, numbering the words, and the assigning each number to the first letter in that word. For example 1 would represent I, 2 would represent T, and so on. This method decodes the cipher containing the supposed contents of the vault itself. It also rather redundantly directs the reader to the first cipher for the vault's location.

Text of the second cipher[edit]

I have deposited in the county of Bedford, about four miles from Buford's, in an excavation or vault, six feet below the surface of the ground, the following articles, belonging jointly to the parties whose names are given in number three, herewith:

The above is securely packed in iron pots, with iron covers. The vault is roughly lined with stone, and the vessels rest on solid stone, and are covered with others. Paper number one describes the exact locality of the vault, so that no difficulty will be had in finding it.

In over 100 years of trying, nobody has been able to demonstrably crack the first or third ciphers.

Errors in the decoded second cipher[edit]

The actual decrypted text of the second cipher is not nearly as clean as the pamphlet makes out. For instance: The pamphlet gives the first sentence as follows:
I have deposited in the county of Bedford, about four miles from Buford's, in an excavation or vault, six feet below the surface of the ground, the following articles, belonging jointly to the parties whose names are given in number three herewith:

While the two results are somewhat similar, it raises the question of how accurate a decoded first or third cipher would really be, as the correct spelling of names and directions would be paramount.

There seems to be no reliable or logical reason to continue decoding these ciphers. The story is too bizarre, the evidence too lacking, and the motive for a fakery (the $$$ to be gained from selling the pamphlet itself) too great. Not that this will stop anybody. People have been trying to crack the cipher for 100 years, and will probably be trying for hundreds more. In the meantime, the residents of Bedford County get to enjoy the occasional crackpot convinced he's found something digging up their back yards.