"I know nothing about the two missing Jedi knights sent by the senate..."

António de Oliveira Salazar (1889–1970) was the corporatist, fundamentalist Catholic dictator of Portugal from 1932 to 1968. He established the Estado Novo (New State), an authoritarian regime which ruled Portugal until the Carnation Revolution in 1974. With a background in economics, Salazar became finance minister of Portugal, a position which gave him the influence necessary to become prime minister. A staunch conservative, Salazar was opposed to democracy, liberalism, communism, and socialism. He also highly valued the Catholic Church, and his regime's motto was "Deus, Pátria e Familia" (meaning "God, Fatherland, and Family").[1] He's a controversial figure, but near universally considered one of the most important in Portuguese history.

An economist's rise to power[edit]

Salazar in his youth, studied at a Catholic seminary, and he seriously considered becoming a priest. For better or for worse, he decided to become a quasi-fascist dictator instead. He attended the University of Coimbra, studying finance and economic policy, and quickly became known as a highly skilled economist.[2] These early years took place during the Portuguese First Republic. As you can guess, that little bit of anarchy democracy didn't last. In 1926, nationalists overthrew the republicans and established a "National Dictatorship."[3] The new regime offered Salazar the position of finance minister twice, with Salazar finally accepting after being promised total control over the government's spending powers.[4] Using these powers, Salazar balanced the Portuguese budget and saved the country from crippling debt.[5] With the massive influence this gained him, Salazar fought his way to the top and became prime minister in 1932. Welcome to the rest of the story.

As Prime Minister, Salazar redrafted the Portuguese constitution along even more authoritarian lines, reforming the "National Dictatorship" into the Estado Novo, or the New State. While it was certainly a right-wing dictatorship, Portugal's regime differed from outright fascism in several important ways: lack of expansionism, lack of a cult of personality, and a relatively moderate use of state force against dissidents.[6] It wasn't all sunshine and roses, however, as political dissent was punished with imprisonment, and strict censorship laws were enforced by the regime's military police. Salazar's book of collected speeches even showed some modesty.[7]:200-201[8]

Salazar used his regime's power to what he saw as Catholic traditional values and to maintain control over the state's economy. He sought to exalt the old Portugal, the colonial power which maintained devoutly religious. The motto of the regime was "Deus, Pátria e Familia" (meaning "God, Fatherland, and Family"), a clear parallel to the motto of France, "Liberty, Equality, Brotherhood." To maintain his power, he packed Portugal's National Assembly with his own supporters and appointed ministers who did what they were told under intense scrutiny. Political freedoms were essentially outlawed, and Salazar's economic policies, while successful, only filled the pockets of his rich supporters while keeping the common people poor and illiterate.[9]

In terms of religious policy, Salazar maintained the policy of mandating religious education in schools. In 1940, he signed a Concordat with the Holy See, which preserved the independence of the Church and outlawed divorces from Catholic marriages.[10] Somewhat unusually, however, Salazar's regime made no particular effort to oppress Portugal's Jewish population; Salazar maintained that Portuguese nationalism was not grounded in racism, but rather national identity.[11]

Beginning in 1936 with the Spanish Civil War, Salazar also gave himself the positions of Minister of War and Minister of Foreign Affairs. Salazar almost immediately provided aid to Francisco Franco's Nationalists, fearing that a Republican victory in Spain would threaten his own regime.[12] These fears also led to further crackdowns in Portugal itself, with Salazar encouraging the formation of militias to serve as auxiliary police and purging anyone he considered politically unreliable from schools and government institutions. To put further stress on the Republicans, Salazar assisted the Nazis in violating the Non-Intervention Agreement by allowing them to send soldiers, airplanes, tanks, and munitions through Portuguese ports.[13] He additionally sealed the border between Portugal and Spain, but only to the Republican forces. When British and French diplomats pressured him to allow international observers on the border, Salazar refused, hoping to conceal the massive amounts of military aid flowing from his country into Franco's hands. Salazar formally recognized Franco's government in 1938.

Despite following a quasi-fascist ideology and running a right-wing authoritarian government, Salazar's Portugal (similar to Franco's regime in Spain) officially remained neutral during World War II and did not join the Axis. Furthermore, while Franco's Spain covertly gave some aid to the Axis powers, Salazar's Portugal did the opposite and covertly gave some aid to the Allied powers. In 1940, Salazar allowed for some 2,000 evacuees from Gibraltar to temporarily settle in Madeira and later granted the Allies basing rights in the Azores.[14] Portugal drifted further into the Allied camp after the Japanese invasion and occupation of Portuguese Timor. However, he still maintained trade relations with the Axis. The politics behind this were complex with several issues at play. Portugal had several colonies which might be threatened if it openly sided with the Axis; there were rumors that Franco's Spain had plans to invade and occupy Portugal if Salazar openly aligned with the Allies; and there was the threat of an American and British takeover of Terceira Island if Portugal did not allow its use as an Allied airbase. Finally, Portugal and Britain share a long history of alliances and mutual trust, and Portugal's neutrality was considered by the British to be best for everyone, as a belligerent Allied Portugal may have provoked Franco into joining the war for the Axis.[15]

In 1933, Salazar created a nasty secret police known from 1945 to 1969 as PIDE (Polícia Internacional e de Defesa do Estado, or International and State Defense Police), modelled after the Gestapo. The PIDE was in charge of running the infamous Tarrafal camp, a concentration camp in the Portuguese colony of Cape Verde also known as O Campo da Morte Lenta ("Slow Death Camp"). In 1965, the PIDE assassinated General Humberto Delgado, a prominent liberal dissident and former presidential candidate. Delgado, along with his Brazilian secretary, were lured into an ambush in Badajoz, Spain (near the Portuguese border) by PIDE agents posing as Portuguese exiles, and immediately executed on the spot (Delgado was shot, while his secretary was strangled to death). The badly decomposed bodies were found two months later by local boys, although some argue that the Franco dictatorship knew of the Portuguese secret police's involvement in the murders and staged the discovery of the corpses.

On the upside, Salazar did not like Adolf Hitler, mainly because Hitler was (in Salazar's view) a pagan.[16] No, seriously. Also on the upside, bringing his total of those to two, he helped Jews escape Nazi persecution by allowing his government to provide entry visas for refugees fleeing the Nazis; the estimated number of rescued Jews ranges from 100,000 to a million.[17] 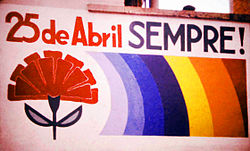 A poster celebrating the Carnation Revolution: "25th of April, Forever!"

Following WWII, Salazar's regime slightly liberalized, allowing for small, tightly controlled opposition groups.[18] Predictably following global trends, liberals and students began to organize for change. Salazar suffered a stroke in 1968 and was replaced as prime minister by Marcelo Caetano, who further softened the regime. Salazar remained unaware of his removal from office, and his staff still brought him fake government "papers" for his signature until his death in 1970.

On April 24th, 1974, the Estado Novo met its final end in the Carnation Revolution, a bloodless uprising among soldiers and civilians, largely in response to a stagnating economy and endless colonial wars in Africa. Demonstrations by a large number of army officers turned into a nationwide phenomenon when joyous crowds joined them in the streets.[19] The revolution took its name from the flowers the civilians would give to the rebel soldiers, which would be placed in their gun barrels. Within several days, the rebels took control of the country, forcing the regime's supporters to flee.[20]

Today, Salazar's legacy is hotly debated, with his apologists repeating how corrupt the First Republic was, and how he ushered in an era of political and economic stability.[21] His detractors emphasize his dictatorial policies and repressive violence and point out that political and economic instability were not banished but only forced out of sight. Still, he apparently still has support in Portugal today, which went as far as him being voted "the Greatest Portuguese" in a phone-in television show. Still, many suspected the results were more likely the product of a concerted effort on the part of the neo fascist far-right, so there's still some hope not all Portuguese are authoritarian idiots. [22]

J.K. Rowling's Harry Potter character Salazar Slytherin is named after him. She resided in the north of Portugal for some years prior to becoming the well-known author she is today. [23]