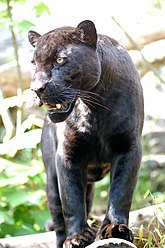 The New Black Panther Party (NBPP) is neither new nor composed of Black Panthers of the Huey Newton type. The New Black Panthers were founded in 1989 by Malik Zulu Shabazz. They are a fringe militant black supremacist organization and listed as a hate group by the Southern Poverty Law Center.[1] They have also been condemned by the Anti-Defamation League and the NAACP.[2][3] They promote a virulent brand of anti-white and anti-Semitic racism and have been involved in a number of violent incidents. The Huey Newton Foundation issued a statement that "There is no New Black Panther Party."[4] Many of its members are, in fact, former members of the Nation of Islam.

In 2007, Shabazz was denied entry to Canada due to a standing misdemeanor charge against him, which he blamed on the Canadian Jewish lobby.[5]

The party's website has hosted an audio clip calling for black people to drag whites out of their houses and skin them alive, before suggesting that nurseries be firebombed to take out white babies.[6] Later on, an extract from the group's radio show surfaced in which Khalid Muhammad advocated ordering all white South Africans to leave the country and murdering all those who remained. He placed specific emphasis on killing babies, women, the disabled and homosexuals, and added that the victims' corpses should then be dug up and killed again "because they didn’t die hard enough" the first time around.[7]

Here's what Shabazz has to say about Jews:

During the Duke lacrosse case

several members sent death threats to a Duke student and then announced their intention to hold a rally on the Duke campus. After hearing about these threats, the school was going to allow them to come anyway before the one administrator with any spine put a lid on it, to the chagrin of a disturbing number of Duke professors.[8]

On election day in 2008, two New Black Panthers, Minister King Shabazz and Jerry Jackson, were spotted standing outside a polling place. Shabazz wielded a billy club and shouted "white demon" and "cracker" at passersby. The police removed Shabazz from the scene but allowed Jackson to stay. The Bush administration's Department of Justice (DOJ) brought civil charges against the men, the NBPP, and Malik Zulu Shabazz. In 2010, charges against Jackson, the NBPP, and Malik Zulu Shabazz were dropped. Minister King Shabazz received an injunction banning him from carrying a weapon in the area of a polling place in the future.

J. Christian Adams, a member of the DOJ, claimed that charges had been dropped against Jackson and the NBPP because of reverse racism. Rumors that Attorney General Eric Holder had been personally involved surfaced and bounced through the wingnut-osphere and were hyped by Faux Noise, WorldNutDaily, and conservative talk radio. This was presented as "proof" that Holder and Barack HUSSEIN Obama were racist against white people. This manufactroversy should have died after Adams himself admitted that Holder had no involvement in the case; however, it continues to be touted as "proof" that Obama was "soft" on voter intimidation when whites are at the receiving end.[9][10][11]

The original Black Panthers had already been boogeymen in the birther crowd as shopped photos of Obama at Panther rallies had been doing their rounds on the chain e-mail circuit for some time. Since the NBPP case, the extreme wingnuts have concocted various conspiracies about either Black Panther group having intimate ties to the White House and that they will be used as a militia to round up the white people and put them in FEMA concentration camps come the black uprising.

"NewBlackPanther.com" redirected to a website called National and International Day of Action & Unity, with the catchy slogan "A CALL TO ACTION!!!!!!!!!!!!!!!!!!!!!!!!". Yes, really.[12] Issues tackled by this outfit include "post traumatic slavery disorder" and "a sick love for, and fear of our former slave-colonia [sic] master". It also yells that "WE ARE ALSO CALLING FOR A BUY BLACK ONLY WEEKEND THE WEEKEND OF APRIL 23RD AND A BOYCOTT OF ALL NON-BLACK BUSINESSES".[13]

Denunciation from the original Black Panthers[edit]

The Dr. Huey P. Newton Foundation's open letter entitled, There Is No New Black Panther Party, openly denounces the group. The first paragraph is reproduced below: