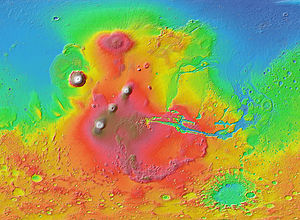 False color image of the Tharsis region on Mars, from NASA.

Tharsis is the name given to a region on Mars, consisting of a great bulge on the planet's surface. Four extinct volcanoes make up the region - Ascraeus Mons, Pavonis Mons, Arsia Mons, and the largest volcano/mountain in the solar system, Olympus Mons. A creationist argument exists that the Tharsis volcanoes, along with Valles Marineris, were formed by the same catastrophic event — a huge asteroid crashing into the surface, creating the Hellas basin, and causing a global flood.

The formation of Tharsis can be explained by comparing it to the Hawaiian island chain on Earth. The Hawaiian islands are being created because that area of the Pacific Ocean is over a "hot spot" of the Earth's mantle where molten rock near-continuously erupts onto the surface. Tharsis was over a similar hot spot on Mars, although there are two major differences.

First, the Martian hot spot has long since cooled and the four volcanoes of Mars are extinct. Second, the Hawaiian island chain is a chain because of the active plate tectonics of the Earth. Mars probably[1] never had such tectonics, so the hot spot would have remained under the same surface area, allowing the Martian volcanoes to grow to immense size.

The Tharsis bulge grew so incredibly large that it ripped a gigantic "wound" in the surface of Mars. This "wound" is better known as the Valles Marineris, the largest canyon in the solar system.

Answers Research Journal, a creationist journal, has thought it necessary to establish that Tharsis is proof of a global flood. On Mars.[2] We are not making this up. This is what they say, and why they're wrong:

Another way of being wrong about Tharsis[edit]

The ignorant and error-prone pseudoscientist Richard Hoagland has developed a theory that Tharsis, together with the antipodeal bulge at Arabia, are evidence that Mars was once a tidally-locked moon of a larger planet, Planet V. This idea was a tenet of the maverick astronomer Thomas Van Flandern, but at least Hoagland had the decency to acknowledge that fact.

Evaluating Hoagland's idea scientifically is thwarted by the fact that his competence at HTML is so slight that the web page describing it is illegible in most browsers. However, although it is true that Tharsis/Arabia does fit the expected consequence of tidal locking, Van Flandern's further development of the idea—that Planet V exploded, accounting for the uneven cratering of Mars—suffers from a potentially fatal illogicality. To wit, the maximum cratering is all in the Southern hemisphere—the part that, per Hoagland's idea, was not facing the exploded parent planet.