Battle Hymn of the Tiger Mother 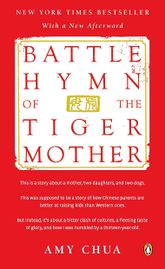 The title is a little bit misleading because a literal tiger would probably be a better parent than Amy Chua.

Battle Hymn of the Tiger Mother (ISBN 9781594202841) is a book by Amy "Tiger Mom" Chua, a Chinese-American Professor of Law at Yale University (sorry Yale) who seeks to import the "Asian Tiger" economic model into parenting. Chua outlines the severe 'worse than helicopter mom' regime she imposed on her two daughters, Lulu and Sophia, to ensure their academic success, a strategy she attributes to her own upbringing as a second-generation immigrant.

Among her admirers has been Charles Murray, which is an indicator to run away as soon as possible.[1]

Among other things, her daughters were not allowed to watch TV, play computer games, host/go on playdates or sleepovers, appear in school plays, get any grade less than an A, not be the number 1 student in any subject except drama and gym, choose their extracurricular activities, play any musical instrument aside from the piano or violin, or refrain from playing either of those instruments. On one occasion, she called one of her daughters "garbage."

On another, Chua rejected a handmade card one of her daughers made her for Mother's Day on the grounds that it wasn't good enough. On still another, she threatened to burn her daughter's stuffed toys if she could not master a piano piece, and made her practice it dozens of times into the night, refusing to even allow her to go to the bathroom. That sounds ghastly, but hey, at least she didn't beat her daughter to death with a pipe for mispronouncing a word.

On January 8, 2011, the Wall Street Journal published the core of the book's argument, under the heading "Why Chinese Mothers Are Superior."[2] A predictable firestorm of controversy erupted. Left and right, people exclaimed, "No, my own mother was not like this, not all Asian parents are like this!" and "Chua has no right to speak for all Chinese parents!" and so on. There were also, of course, those who defended her, claiming an antithesis to the "Western style of parenting." Chua has gone on to say that the book is not so much a how-to manual as a self-reflective, self-deprecative memoir, and her daughter has defended her, saying that much in the book that sounds harsh was not really as bad in real life (though her upbringing may have led her to perceive her experience as less harsh than others would, or maybe she's just glad it's over).

It is possible, of course, that the events in the book are partially or entirely made up and that Chua's intention was merely to make some money and garner some attention by pandering to Westerners' worst stereotypes of East Asians. If such is the case, she has certainly succeeded.

Jeremiads of child-rearing have been a regular feature in publishing for almost as long as books have existed. But in American society, the discussion has become urgent. The very next year after the publication of Battle Hymn of the Tiger Mother, author Pamela Druckerman produced Bringing Up Bébé, another story of alternate parenting that has produced results from almost the opposite approach (an imitation of French parenting that might be labeled "tactical neglect"). Yes, this is how it starts.[3]

In Battle Hymn, Chua points out that the children of Asian immigrants are unusually successful, statistically speaking.[4] The crux of the matter is whether or not this success is a matter of culture and circumstance, or comes from the harsh expectations and methods to which Chua ascribes the success. And of course, always present — though unspoken — are the implications of race that always arise when any large ethnic group is ascribed a specific set of traits.

Another question that reporters should be asking Chua is why Asian Americans are increasingly voting for the political party most affiliated with social equality.[5]