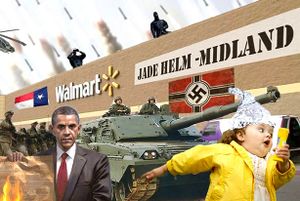 Jade Helm 15, if you are sane, was a military exercise in Texas and six other states involving 1,200 personnel from four of the five branches of the U.S. military. The exercise was designed to train soldiers in modern warfare, including maneuvering through civilian populations. Except for being the largest such exercise undertaken by the U.S. military, there was little remarkable about it.

Unless you "AWAKEN" and see the TRUTH, of course.

According to conspiracy theorists, Jade Helm is also a plan to take control of Texas and do one or more of the following:[1][2]

Jade Helm may or may not be involved with the ISIS base camp slightly north of the Mexican-American border.[6] If it is, it's probable that the Jade Helm troops will cooperate with ISIS to impose their combined communist-Sharia ideology on the good folks of Houston.[7]

Alex Jones changed his position from the "U.S. military [is] positioning itself to take over the states and declare martial law" (March 27),[8] to "Jade Helm 15 Is NOT a Martial Law Takeover", stating: "Is it true martial law is coming? No, it's incremental. They're not going to take over this summer. Probably. We can never say completely. But that it's part of acclimating and conditioning." (April 04).[5]

Needless to say, this is absolute bullshit. This is a standard domestic exercise, of the kind that have been going on since the country was founded.

200 people in rural Bastrop County went to a standard public briefing by the Army. There, they questioned Lt. Col. Mark Lastoria about whether the government was planning to confiscate guns or implement martial law. Bastrop County Judge Paul Pape said "conspiracy theorists" and "fear mongers" had been in a frenzy.[2][9] Bastrop resident Bob Wells stated:[7]

It’s the same thing that happened in Nazi Germany. You get the people used to the troops on the street, the appearance of uniformed troops and the militarization of the police. They’re gathering intelligence. That’s what they’re doing. And they’re moving logistics in place for martial law. That’s my feeling. Now I could be wrong. I hope I am wrong. I hope I’m a ‘conspiracy theorist.’

Given this grave threat, Texas Governor Greg Abbott called out the Texas State Guard to monitor the military exercises, stating:[2][9]

It is important that Texans know their safety, constitutional rights, private property rights and civil liberties will not be infringed upon. By monitoring the Operation on a continual basis, the State Guard will facilitate communications between my office and the commanders of the Operation to ensure that adequate measures are in place to protect Texans.

Luckily, Jade Helm is a threat to none of the above.

My office has reached out to the Pentagon to inquire about this exercise. We are assured it is a military training exercise. I have no reason to doubt those assurances, but I understand the reason for concern and uncertainty, because when the federal government has not demonstrated itself to be trustworthy in this administration, the natural consequence is that many citizens don't trust what it is saying.

This masterly piece of weaseling manages to both avoid explicitly supporting the conspiracy theory and to rally the base against Obama.

Rand Paul also promised to "look into" the matter.[11]

Representative Louie Gohmert (R-Texas) reminded us of the hardships Christians face in America:[12]

We have seen people working in this administration use their government positions to persecute people with conservative beliefs in God, country, and notions such as honor and self-reliance. Because of the contempt and antipathy for the true patriots or even Christian saints persecuted for their Christian beliefs, it is no surprise that those who have experienced or noticed such persecution are legitimately suspicious.

I have no idea what he’s thinking. In no way will the constitutional rights or civil liberties of any American citizen be infringed upon while this exercise is being conducted. The individuals participating in the exercise won’t be traveling incognito. They’ll be wearing armbands.

Shortly after the conspiracies started flying, Texas received a massive amount of rain over the course of a month, completely refilling certain drought-afflicted areas of north Texas, who had been down in the upper teens as far as lake saturation percentages were concerned. We're talking years of drought ended in a matter of days. In particular, flooding got so bad that several sections of cities in Texas had to be evacuated due to the high floodwaters that were causing damage to homes and vehicles.

And suddenly, all of Texas didn't seem to hate the presence of US troops in Texas, since the troops were doing much of the cleanup, and the government was sending disaster relief money. Time will tell if this gets spun into a conspiracy as well.

The flooding is turned into a conspiracy theory[edit]

HAARP is apparently to blame for the flooding in Texas. It involves the NWO and a false Christ for obvious reasons.[16]