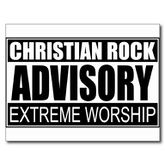 Christian rock or contemporary Christian music is a catch-all term for rock, pop, hip-hop, or other modern music where almost the entire focus is on Godbothering lyrics.[3] Most of secular music fans call it boring, lightweight fluff, more interested in pushing a message than making good music — and that just doesn't rock out at all. Some evangelists are even more killjoy about it, considering it the work of the devil sneaking demonic jungle music into the church.

Southern Gospel and the Jesus movement[edit]

The origin of Christian rock is murky. In the 1950s and early '60s, many rock & rollers recorded obligatory gospel albums on the side. This was not remarkable or surprising for the time. Many of them came from religious backgrounds, particularly Pentecostal or Baptist, including Elvis Presley, Johnny Cash, and Jerry Lee Lewis, the latter of whom was the cousin of Jimmy Swaggart. Southern and Black gospel music was the de facto Christian rock of the '50s and '60s, and along with the emerging rock and folk music of the era, would have a lasting impact on the future genre. It enjoys a niche audience to this day, most notably in African-American churches, which developed their own, R&B/soul-influenced style known as "urban contemporary Gospel" that exists as an analogue to the contemporary Christian music scene.

Later in the '60s, as the British Invasion (largely removed from that religious background) took hold in rock and roll, it became associated with the counterculture and hippies. Many hippies explored drugs, modern philosophy, Eastern religions like Hinduism and Buddhism, offbeat cults derived from such, radical politics, and experimental modes of living, but some hippies were really into Jesus, man. They became known as the Jesus Freaks or Jesus movement.

Christian rock as we know it today traces back to both the Jesus movement and to outside attempts by more conventional evangelists, most notably Chuck Smith of Calvary Chapel, to evangelize youth. Larry Norman is most often mentioned as the first Christian rocker to emerge from the Jesus movement, and as such is now viewed as a "godfather" of sorts for Christian rock.[5] Meanwhile, a lighter Christian pop style began around the same time in the stable of groups associated with Chuck Smith and his record label, Maranatha! Music.[6]

This stuff was called "Jesus music" back in the day, and most of it is really, really bad. Owing to its roots in hippiedom, it was largely the same sort of "peace and love" anthems that proliferated in that culture, only with references to God thrown in. Larry Norman is generally considered the exception; his albums were released on major labels and recorded in Beatles' producer George Martin's studio, and he was highly critical of the poor quality, questionable messages, and insular, anti-mainstream nature of most of the Christian music and fandom of the '70s and '80s, feeling that they were presenting a bad image and standing in the way of efforts to spread the Gospel.[7][8] Also worth mentioning is the short-lived attempt to cash in on the popularity of Jesus in the early 1970s, with musicals like Jesus Christ Superstar and Godspell, and songs like "Spirit in the Sky" (which was written by Norman Greenbaum to prove that anyone could write a gospel song) and "Put Your Hand in the Hand".

By the '80s, the counterculture aspects of the Jesus movement faded out entirely, and "Jesus music" became contemporary Christian music, or CCM, a catch-all term that encompasses religious-oriented rock and pop music. A lot of it in the late 1970s and 1980s were just bad carbon copies of popular secular bands at the time; the newly born again teenager could chuck out their AC/DC and replace it with a smorgasbord of choices like De Garmo & Key (fake Doobie Brothers), Petra (fake Styx), Don Francisco (fake Jim Croce), Randy Stonehill (fake Lynyrd Skynyrd in 1976, fake Elvis Costello in 1982), Steve Taylor (fake Oingo Boingo), and, um, Bob Dylan (not faking it, unfortunately).[9]

CCM began to come into its own in the late '80s and early '90s once Amy Grant, Stryper, and Michael W. Smith started having crossover hits on the pop charts. The proliferation of big-box retailers and large music chains in the '80s and '90s expanded the reach of Christian music beyond religious bookstores; the share of albums sold by Christian stores fell from 90% in 1985 to less than half by 2000.

The genre experienced its greatest mainstream success in the mid-late 2000s with the rise of the metalcore genre, a fusion of heavy metal with hardcore punk, with many of the biggest bands in the scene being either overtly Christian or otherwise adjacent to the faith.[10][11] As the songwriting from these bands often diverged sharply from the more conventionally spiritual themes of their CCM counterparts, in particular embracing a sort of machismo that was typically absent from lighter CCM music, the sincerity of this faith was often called into question. In an infamous incident, Tim Lambesis, the frontman of the Christian metalcore band As I Lay Dying who was sent to prison for trying to hire a hitman to murder his wife, stated in a 2014 interview with Alternative Press that he and his bandmates had lost their faith and become atheists years ago, that they had continued to pose as Christians in order to maintain their success, and moreover, that very few of the Christian bands they toured with were actually Christian behind the scenes, rendering South Park's joke about Cartman's terrible Christian band all too real.[12]

In 1997, Pat Boone released an album titled In a Metal Mood: No More Mister Nice Guy of mostly heavy metal covers that veered from lame to ironic. While not CCM per se, it did cause screaming fits among the CCM audience due to Boone's reputation as a lifelong, clean-cut Christian.[13]

The term contemporary Christian music is occasionally also used for various modern religiously-themed instrumental/orchestral works, such as Maslanka's Unending Stream of Life: All Creatures of Our God and King or Holsinger's Abram's Pursuit, though this meaning is usually made clear by its regrettably rare context.

Christian rock bands are known for their deep, insightful lyrics

Christian rock and CCM have long been caught in a twilight zone that prevented them from gaining much of an audience beyond a small niche. On the one hand, secular listeners tuned much of it out, viewing it as cheap ripoffs of "real" pop and rock. On the other hand, fundamentalist Christians were skeptical at best and hostile at worst, viewing it as an attempt to get good Christians to listen to "devil music" by presenting it as godly.

In the '80s and '90s, a common (and not entirely unfounded) stereotype emerged that Christian rock and CCM were just bland product for the megachurch market and the poor man's substitute for secular pop and rock, trading musicianship and songwriting quality for Hallmark schmaltz, preachiness, and references to Jesus and other biblical elements.[14] Even today, the Christian bands that have been best able to break into the mainstream, like Creed, P.O.D., Flyleaf, Thousand Foot Crutch, Skillet, and Underoath, have been those that have turned down the overt religious elements and written about secular subject matter in addition to Christian material.[15] This, in turn, produces accusations of shaky theology from Christian critics; at least one such critic described it as "Jesus is my boyfriend" music.

Many popular "secular" musicians are openly Christian without being part of the CCM scene, with U2,[16] Paramore,[17] and OneRepublic[18] being among the most famous examples (and their music is therefore considered acceptable to many CCM fans). However, such bands often go well out of their way to avoid the "Christian rock" label, as it is a kiss of death to secular listeners — kids who listen to CCM do so because they grew up in a household with evangelicals pushing the stuff.

Other artists exist who openly profess a Christian faith but distance themselves from CCM because of American evangelicalism's association with conservative politics (one example being Canadian singer Bruce Cockburn, whose politics run to the left[19]).

Then we have bands like Midnight Oil, best known for strident leftist activism - but all the tensions inside the band were between the born-again Christians and the non-Christians.

Fundamentalists and the American religious establishment have long had a fraught relationship with Christian rock and CCM. Once rejected in conventional churches, starting in the '80s such music was welcomed as an evangelism tool, and today many evangelical churches make heavy use of Christian rock and CCM. Even some of its critics eventually came around and embraced it once it became mainstream among evangelicals; one notable example is Bob Larson, who went from an opponent to actively promoting Christian rock to callers on his Talk-Back radio show.

However, some diehard fundamentalists continued to reject any association of rock music with Christianity. To them, Christian rock and CCM were even more spiritually dangerous than their secular counterparts, acting as wolves dressed as sheep and leading the flock astray. Bob Jones University, for one, continues to ban its students from listening to Christian rock and CCM. Jack Chick relied on the loony tall tales of John Todd claiming that the genre was a Trojan horse invented by Lou Siffer to get demonic music like "Embrace Me, Love of Death", sung by a band that was into vampirism, into the church.[20] Todd, a phony "ex-Satanist" turned evangelist, is worth a mention since he claimed that he, back in his alleged "devil worship" days, personally gave a huge check from the Illuminati to Chuck Smith to launch Maranatha! Music.[21] Jimmy Swaggart also wrote a book attacking Christian rock,[22] in which he compared becoming a rocker in order to spread the gospel to becoming a prostitute to spread the gospel.[23][24] The book's effect was muted, though, as it came out around the same time that Swaggart's adultery scandal broke; apparently, he was an expert on the subject. David Wilkerson was initially a supporter,[25] but changed his mind and turned against Christian rock after being shocked — shocked! — to see Christian metal bands wearing studded leather, which is of course associated with BDSM (and therefore, according to Wilkerson, demonic possession).[26]

Christian rock fans are as rabidly anti-success as any hipster, metalhead or indie kid, condemning CCM artists selling any records outside the scene as "secularised" and "getting a bit worldly." CCM bands with crossover talent often have to actively disassociate from the genre to achieve wider success. For instance, Evanescence went out of their way to avoid being labelled "Christian rock", knowing the effect it would have on their chances at radio airplay. Evanescence's (mostly CCM) label went so far as to have their records pulled from Christian stores, to avoid backlash towards their other acts, after the band started denying being a "Christian rock" group.[27]

Mind you, the CCM fans are still scrabbling for evidence that Katy Perry — who, before she proudly sang of kissing a girl and liking it, recorded a CCM album as 15-year-old Katy Hudson[28] — is a deeply sincere and devout Christian[29] who will come back to CCM, gosh darn it.[30] Marrying Russell Brand (in a Hindu ceremony, no less) and going all but naked (but technically not indecent) on the cover of Rolling Stone are obviously dog whistles to the adoring CCM fan base.