Crisis actors are supposedly professional actors used by government agencies and/or the mainstream media to deceive the public with portrayals of trauma and suffering. Specifically, they act as victims or witnesses in staged school shootings or hoax terrorist attacks. Needless to say, this sort of thing actually goes on only in the minds of denialists and conspiracy theorists.

The term "crisis actor" can be legitimately used to refer to actors hired to simulate disaster drills, for the purpose of training employees how to respond in such scenarios.[1][2] However, this has nothing to do with the wingnut definition and is an uncommon use of the term.

The term "crisis actor" appears to have had very limited use since 2007, and started to get picked up after August 2011.[4]

See the main article on this topic: Sandy Hook massacre

The term was popularized in early 2013 after Professor James Tracy of Florida Atlantic University, who has a history of promoting anti-government paranoia, attracted some media attention for blog posts claiming that the media coverage of the Sandy Hook massacre of December 2012 had been misleading.[5] Tracy claimed that the many witnesses interviewed or photographed by the press were actually "crisis actors" portraying the "official story" as part of a cover-up of whatever did or didn't actually happen.[6] Tracy was ultimately fired from his job at Florida Atlantic University in 2016 after harassing parents of Sandy Hook victims.[7]

Use of the phrase "crisis actors" quickly spread within the clogosphere, becoming popular with conspiracy theorists who queried or denied the accepted accounts of Sandy Hook and other crises such as the Aurora shootings of July 2012. The concept has obvious crank appeal, allowing easy explanations for the huge volumes of film footage, photographic evidence and eyewitness testimony surrounding such events, and fitting nicely into the dog whistle politics and pseudo-military jargon common among post-9/11 conspiracy nuts.

Disturbingly, some of these assholes took to naming and harassing individuals whom they perceived as possible crisis actors. Ordinary citizens who had been interviewed at Sandy Hook, or done what they could to help survivors and the distraught community, found not only their media interviews but their private lives and Facebook profiles under hostile scrutiny and their privacy invaded with aggressive telephone calls and hate mail. Most famous is the case of Gene Rosen, a local resident who, on the day of the Sandy Hook massacre, had looked after six children who fled the school. He was interviewed many times during the media coverage of the shootings. As the Sandy Hook "truther" movement picked up momentum, Rosen quickly became identified by various bloggers and conspiracy pundits as a crisis actor, and suffered sustained campaigns of online and real life harassment.[8] 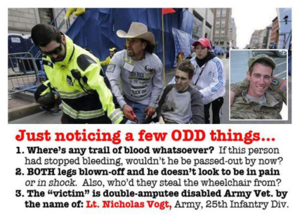 He "doesn't look to be in pain" whatsoever, if you don't look at his face. 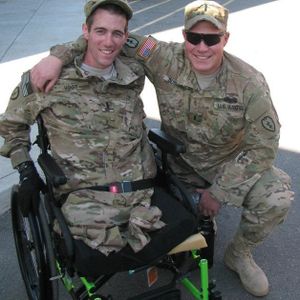 The actual Nick Vogt. Note the location of the injury.

The crisis actor meme resurfaced in the wake of the Boston Marathon bombing in April 2013, with some cranks (including James Tracy once again)[10] claiming that the publicised footage of explosions and injured victims was unrealistic, and that the whole thing had been staged as a false flag operation.

This idea is bullshit.[22] As Mike Rothschild notes:[9]

Of course, there is absolutely no evidence that Baumann and Vogt are the same people, and a huge amount of evidence that they aren’t. For one thing, they had different injuries, with Vogt losing his legs above the knee, and Baumann below the knee. Also, a cursory visual comparison of the two men confirms they look almost nothing like each other, other than both being Caucasian and dark-haired. But to crisis actor believers, those facts do nothing other than lend confirmation to the conspiracy. To them, Vogt was pretending to be Baumann, taking on a lead role in the government’s latest false flag – a pernicious fake designed to take away our rights and heap the abuse of restrictive laws upon us.

See the main article on this topic: 2014 Sydney Siege

In the aftermath of the 2014 Sydney Siege, numerous conspiracy theorists claimed that the incident was a false flag and that the hostages involved were crisis actors, and also that the perpetrator was also an actor of some kind.[23][24][25]

After the 2015 attack in Paris many blogs went crazy coming up with conspiracy theories to prove that the attack was a false flag.[26] Before It's News posted an image of a Parisian comparing her with other accused crisis actors.[27]

After this horror, several of the usual suspects came out of the slime to cry "false flag!".[28] Unbelievably, much like with the Sandy Hook massacre, they began harassing the survivors and accusing them of being crisis actors.[29]

Again, just hours after 17 people died at the muzzle of Nikolas Cruz

's AR-15 assault rifle, the accusation that crisis actors were seen on television coverage surfaced. One student survivor who was a specific target of the hysteria was David Hogg

, whose father was a retired FBI agent. A YouTube video detailing this accusation reached No. 1 on YouTube's trending page before it was removed by the company.[30]

"Crisis actor" proponents appear to have some degree of prosopagnosia

(the inability to recognise faces) and be unaware of it, or that people in general are much better than them at recognising faces. Evidence for "crisis actors" is frequently two people who don't actually have the same face, but who have similar hair, skin colour and clothes. An alternate tactic is to present multiple pictures of the same person at the same event, then claim that they are different events.[33]