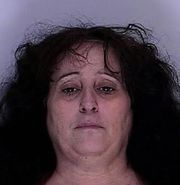 Natasha Delima is a "news" vlogger on YouTube and part of the extreme right pro-Trump fake news brigade. She is a follower of 4chan conspiracy peddler QAnon, has imaginary phone conversations with Donald Trump live on her YouTube channel,[1] and is currently suing Patreon, YouTube, Google, Facebook and Twitter for embezzlement and denying her First Amendment rights. She may be mentally ill, and has had at least one court ordered mental evaluation after she claimed God and Oprah Winfrey told her to kidnap her neighbors' children.[2]

Fighting the law and the law wins[edit]

Delima has a long history of being a vexatious litigant and filing pro se lawsuits against anyone she is mad at. These screeds of irrational legal jargon are half sovereign citizen nonsense and half paranoid delusions. In 2012, after a judge tossed one of her suits against a local law firm she was arrested for threatening the judge in a YouTube video at the courthouse.

Just a few years later Delima decided to kidnap her neighbors' children after hearing God and Oprah Winfrey speak to her for days, telling her she had to do it. She grabbed both young boys and tried to lock them in her house, after the father rescued them she attempted to pull a neighbor over to help her kidnap the children. Delima's rants in court were so over the top that she actually had a psychiatric evaluation ordered.[2]

Delima came into mild fame in the craziest of crazy circles on the far-right fake news echo chamber during and after Trump's election in 2016. She is a big proponent of the Pizzagate conspiracy theory that says that high ranking Democrats (including Hillary Clinton) are somehow using a pizza parlor in D.C. to run a child sex trafficking ring. This crazy conspiracy actually led to someone shooting up the parlor to "rescue the children".[4] Delima posted multiple videos a day popularizing this insanity as well as the QAnon conspiracy that Trump is actually leading a coup against the deep state and using sealed indictments and military tribunals to go after political opponents.

In mid-2017 Delima's YouTube channels were demonetized and she was unable to get her "fans" to donate enough money to Patreon to support her "lifestyle". So she turned to her favorite money-making scheme: more vexatious litigation! 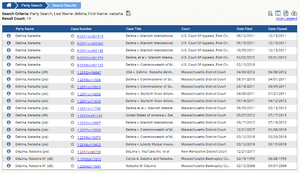 Delima teamed up with Isaac Green, another demonetized vlogger and YouTuber, to sue every major social media outlet for failing to give her money and denying her First Amendment rights.[5] This is not the first time that Delima has attempted to use a lawsuit to extort money from people. As can be seen in the graphic to the right Natasha has a long history of trying to use the courts to bludgeon her perceived enemies. For example, after being fired from her bartending job at a Marriott in Boston Delima sued the parent company for "libel and defamation." The case was ultimately dismissed, but Delima continued her pursuit into the Appellate court claiming she won by "default." This claim of winning lawsuits by default continues to be a major theme in everything she files.

In 2008 Natasha was trying to sell trinkets at a flea market and when she didn't make enough money she sued the owner. Interestingly enough, she is quoted as saying, "I have begged for a settlement because that’s the way to resolve everything. Give me enough money to start over. I want it over. They have a million dollars and I don't."[6] This is the same language that she is currently using in her lawsuits against Facebook, Patreon, YouTube, and Twitter. Demanding that they should settle for millions of dollars[7] and be done with it, "Settling is the right thing to do." Perhaps Delima realizes her filings will fail, just like every other time, but is hoping she can extort a settlement if she is a big enough pain?

Delima has some very bizarre ideas about the law. She believes that social media companies are "public" and therefore have to abide by the First Amendment and that it is illegal for them to remove content on their own platforms or to demonetize content creators. She seems to confuse the term for publicly-traded companies on the stock market for being somehow publicly controlled companies beholden to the same rules as the government. Ironically, Delima blocks all comments on her videos and talks regularly about how she has a right to control what people say on her platform. So far the hypocrisy is lost on her.

She also seems to believe that lawyers can not represent clients if they are accused of wrongdoing. She has multiple videos saying that because she claims these companies embezzled her money, any lawyer that points out that it is nonsense is violating the law and should go to jail.[8] Given Delima's limited understanding of the law or the constitution, this should not be surprising.

Vexatious Filing and Taking it to the Constitutional Supreme Court[edit]

On June 18th, 2018 the court issued an order in Delima's Youtube lawsuit preventing her from filing any more motions in the case without a specific court order. Natasha's endless filing of frivolous and nonsensical motions was overwhelming the court. Quoted from the order:

This is the first step in declaring Delima a vexatious litigant and hopefully stopping her lawsuits moving forward. At the same time, the court stayed a hearing in June citing the defendant's likelihood of winning outright dismissal of the case.

With the writing on the wall strong enough even Natasha seems to realize she is likely to lose she is already jumping ahead and filing her appeal straight to the Constitutional Supreme Court, who thanks to her deep connections with President Trump, will bypass all legal rules and precedents and order YouTube to pay her millions of dollars.[10][11]

In late June of 2018 Delima appears to have had a complete breakdown. Following the reported fatal accident of her "fiance" (who was deported to Mexico 7 years ago, and yes the irony of a Trump supporter complaining about illegal deportation is totally lost on Natasha) Delima appears to have been hospitalized for a nervous breakdown. She produced several YouTube videos filled with tirades about the hospital, the "forced" drug cocktails, and the fact that they didn't give her a catheter.[12] She did several follow up post where she threatened the hospital, the staff and her doctor who followed up on her case urging her to keep taking her meds.[13]

Shortly after this breakdown, Natasha dropped Isaac Green from the lawsuit in a published video. The fact that the court has not ruled on any of their motions to consolidate the lawsuits and that posting to YouTube does not count as a motion to rescind those filings did not seem to work into the equation. Apparently, Isaac was not grateful enough for the hundreds of dollars and hours of work she claims to have dumped into a lost case. Considering all of her filings are stream-of-consciousness, nonsensical ramblings, we hope that the supposed hours of work were an exaggeration.

Never letting a helping hand go to waste, Natasha quickly decided to take advantage of her hospitalization with another attempt at extortion through lawsuits. Posting on her YouTube channel to try and convince her gullible supporters to throw at her to "fast track" her claims Natasha claimed that she was not actually getting medical help but was actually kidnapped[14]! Delima was nice enough to post her lawsuit to give us a preview of the craziness:

Natasha is asking for a reasonable $5 million dollars for her pain and suffering.

In July of 2018, "supporters" of Natasha informed her that she had a wiki page. After posting several videos claiming that this is false, she finally discovered her RationalWiki article. Delima did not address any of the content of the article and said it was not worth her time. This was followed up by posting multiple videos over the course of several days, including her desire to start her own "Natashapedia" website. At some point, Delima decided RationalWiki had to be the work of an 80-year-old woman who also runs a small YouTube channel. [16][17][18][19]