Cutting Edge Ministries is a webshite based in Wagener, South Carolina promoting a delicious mixture of fundamentalist Christianity and conspiracy theories.[2] They claim to be a "fundamental independent Baptist Church outreach ministry" that believes the best way to run a ministry is to spam the internet with bullshit related to "Biblical prophecy of The New World Order".[3] All of the site's content, including daily "news alerts", is peppered with advertisements for kookbooks and digital media from their online store. They are essentially the same as Before It's News and All News Pipeline with an emphasis on bizarre pseudo-Christian end times weirdness.

If there is a conspiracy theory that can be tied to anything dealing with Christianity, the Book of Revelation, and end times eschatology, you'll find it on their webshite or in one of the many piles of junk they offer for sale. Linking UFOs and extraterrestrial beings to the arrival of the Antichrist and a sign of biblical prophecy fulfilled may seem like an elaborate joke, but apparently the people that run this site are serious.

Cutting Edge goes completely bonkers over 9/11 and wholeheartedly embraces all kinds of conspiracy theories related to the terrorist attacks:

Within a few hours of the infamous attacks of 9/11, 2001, Cutting Edge began to see the hideous occult hand of the Illuminati, their 'signature' so to speak... We issued a series of articles detailing this use of the number "11", proving that the Illuminati was the planning, active agent behind these attacks.[5]

One of the site's main attractions is its collection of what are possibly the most thorough "Harry Potter is of Satan" articles on the net.[6] From reading the plot synopses, one gets the impression that they never actually read the books, because they are full of factual errors.[7] However, the author later shows obsession with small details that indicates they at least skimmed, or are Cherry picking. The author seems particularly obsessed by colors:

[Rowling] uses such unique colors, and they gave such a unique flavor to her novels, I felt in my inner heart that she was using them with a specific purpose, or drawing them from a specific source. Originally, I believed it possible that she might be using colors which were Mind Control triggers.[8]

Pointing to a pagan calendar tradition which associates each month with a colour, the author breathlessly declares his "MAJOR DISCOVERY" that Rowling uses the same colours in her books.

These evil colours, which "originate from the old Satanic Druid religion", include red, yellow, green, blue, orange, brown and white.

As if this wasn't absurd enough, the article also claims - without any explanation whatsoever - that green is Satan's favourite colour.[8] (This is presumably no relation to the Witchsmeller Pursuivant in the first Blackadder series identifying carrots as "the Devil's favourite food!")

School shootings and the giant hexagram[edit] 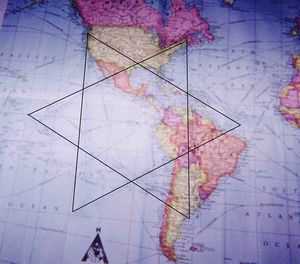 Cutting Edge found out that six of the school shootings committed over a space of two years, when marked on a map, form two rough lines: "they were planned events, not isolated, sporadic horrors", declares the site. The two lines intersect in Hope, Arkansas, but Cutting Edge admits that it sees no significance there.[9]

Contributor Pastor Ron Riffe went on to suggest that they two lines were actually part of a hexagram, and dutifully plotted out such a shape on a map of the world. Disasters which occurred on or around the lines of this hexagram include the Venezuela floods, the Waco incident, the murder of Jonbenet Ramsey and the crashing of John F. Kennedy Jr.'s plane ("While his plane apparently did not go down right on the line, it went down close enough to it to raise one's eyebrows"). At the centre of the hexagram are the Galapagos Islands, "at which Darwin conceived his Satanic idea we now call Evolution".

What we have here is a unified conspiracy, and Cutting Edge continues down the rabbit hole by blaming it on the Illuminati:

[I]t is highly conceivable that the Illuminati would create such a symbol, believing it would reverberate with Satanic power to aid them in achieving their global objectives[10]

...and they blame Bill Clinton, who they naturally assume is in cahoots with the New World Order Illuminati:

President Bill Clinton has committed his Administration to the disarming of Americans, in accordance with Illuminist objectives and United Nations directives... To accomplish this goal, we believe it highly likely that Clinton has committed his Administration to the exercise of powerful Black Magick Witchcraft to so enrage Americans against guns that they will rise up as one to demand that military troops disarm the public, by force if necessary."[9]

They claim that Freemasonry is a religion infested with an "occult nature" linked with New World Order conspiracies.[11] They expose a purported letter from 2000 that says that they've been threatened that the masons will "dig up a lot of dirt" on them.[12] They claim to have proven "beyond the shadow of a doubt" that Freemasonry is the worship of Satan.[13] For added flair, they wholeheartedly embrace the Washington, D.C. street design conspiracy theory and cite it as proof that the city "was conceived as the occult center of power for Freemasonry in the United States."[14] For good measure, they link Freemasonry to the Knights Templar, which they claim are "satanic," and by Cutting Edge Ministries' logic, provide more proof that Freemasonry is satanic.[15]