From RationalWiki
(Redirected from DUP)
Jump to navigation Jump to search

If the DUP can't hold a pissup in a brewery, nobody can! 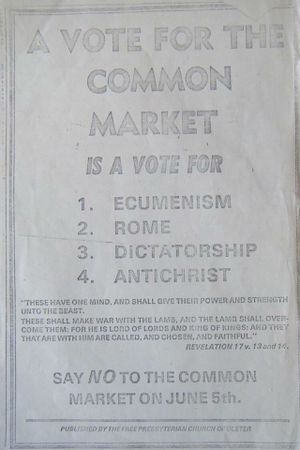 The Democratic Unionist Party, founded in 1971 by Ian Paisley, are a far-right political party in Northern Ireland, which is the largest in that country, which is enough to make any sane human being shit their pants.

They are violent, sectarian, fundamentalist, creationist homophobes with a long history of crossing from terrorism to police to military to politics and back again, and they're just as responsible for supporting paramilitaries as Sinn Féin. Given their policies on LGBT rights, abortion, environmentalism and sectarianism, one may get the justified impression all they exist for is to purposefully try to fuck up life for everyone and society as a whole.

More people outside NI learned of them after the 2017 snap election, when Theresa May bungled her majority and was forced into a coalition with the DUP. The DUP was an anchor around the neck of the Tory government, but the Tories needed them on their side to guarantee a strong position in NI, and after the 2017 election to form a government at all. (After the 2019 election, Boris Johnson absolutely no longer gave a hoot about the DUP's concerns.)

That the DUP is full of creationists is the least bad thing about them.

The party has long been an advocate of homophobia; in 1977, when the Northern Ireland troubles were at their peak, Paisley launched the "Save Ulster from Sodomy"

campaign to prevent decriminalization of male homosexuality in the country. However, in 1981, The European Court of Human Rights ruled the law to be unconstitutional in accordance with their code of conduct. So, Ian was God's most incompetent prophet, a bloody dead loss.

Since 2012, the party have ruled against marriage equality on five occasions. Their main rival, Sinn Fein are an advocate on this position. In November 2015, the majority of the Northern Ireland assembly voted in favor of same-sex marriage, however the Democratic Unionist Party filed a petition of concern to prevent the bill from having any effect.[1]

Although not all of them are outright Climate Change Denialists, their Minister for the Environment has blocked any local targets for greenhouse gas reduction on the grounds "I am content with the plans currently in place or being developed that will reduce our emissions further and, in these circumstances, I currently see no need to introduce a Northern Ireland Climate Change Bill."[3]

The party have advocated for Britain's departure from the European Union.[4] On the other hand, being Northern Irish, they do support free movement and travel (most of them not wanting to restart the Troubles).[5]

that attempted to bring the terrorism to an end. It was launched at a 3000 strong invitation only meeting chaired by then-Press Officer Sammy Wilson

, with DUP founder and leader until 2008 Ian Paisley and deputy leader Peter Robinson

(who succeeded Paisley as leader from 2008 until 2015) present and giving speeches at the launch. Ulster Resistance worked with the UDA and UVF to illegally import arms to Northern Ireland, and funded themselves with a bank robbery and stolen weapons technology sold to apartheid-era South Africa.[6] After gunrunning and stealing weapons technology the group faded into the background although as late as 2007 were claiming they had nine divisions.[7] Because of course they do.

The DUP of course have ties to most of the loyalist paramilitary groups that they did not themselves set up, and these ties are still ongoing; in June 2017 DUP leader Arlene Foster was criticised for meeting with the UDA

leader just days after one branch of the UDA apparently killed Colin Horner in front of his three year old son.[8]

Famous members of the DUP[edit]

The DUP is notable for the quality of its membership. To save space only members of the DUP who either are or have been MPs, Members of the Northern Irish Assembly, or the leader or deputy leader have been listed; this is only scratching the surface and there is more. Even the conservative-leaning The Times has done a feature on some of their choice quotes.[9]

) is in many ways far more trivial than most of this page; the DUP set up a scheme by which people would be reimbursed for using renewable energy on heating. Unfortunately the scheme offered to pay £1.60 for every £1 spent on heating, they put no cost controls in place, and there was nothing preventing previously unheated properties being heated under the scheme. This scheme, set up by Arlene Foster, and with DUP insiders benefiting was a large enough scandal that it ended up bringing down the Assembly in January 2017 in addition to costing the assembly almost £500 million.