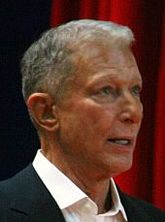 Erhard Seminars Training (EST[note 1]) was a two-weekend seminar and its controlling organization, originally cobbled together and operated by former encyclopedia- and used-car-salesman Werner Erhard

solipsism and existentialism, doing guided meditation sessions, and being allowed only two bathroom breaks in each day's 16-hour session and no food or drink. This particular combination of techniques - combining verbal abuse, sleep deprivation and denial of daily necessities with teaching new beliefs victims customers wouldn't otherwise hold - is known in other contexts as brainwashing.

EST's apparent successors (not always corporately linked, but peddling remarkably similar programs from much the same leaders people) include the organizations:

and their flagship "courses":

At the end of the two weekends the victim participant was supposed to "get it". Get what? Well, you just shelled out a quite significant sum in pre-late-70s-inflation dollars to fatten Werner Erhard's bank account. Get it?

Participants who "got it" came out of EST with a new vocabulary of incomprehensible and ultimately meaningless psychobabble that was supposed to "transform" their lives, or something. It consisted of stringing phrases together like "personal space", "world working", "creating context", "manifesting", "generating principles", and other meaningless bibble-babble. These phrases could be randomly strung together in any order and still be equally meaningful to an EST initiate and meaningless to everyone else. Participants were also instructed during the last part of the training, after they were supposed to have "gotten it", to go out and actively recruit others to empty out their bank accounts for this "experience", speaking of course in incomprehensible babble[1] (so the person wouldn't have a clue what EST actually was) but bubbling with so much enthusiasm that it must be something good.

While Werner Erhard preached taking charge of one's own life and personal freedom to attendees, which was part of what they were supposed to "get" from the training, the situation within the est organization itself was quite different: its paid staff and the large contingent of unpaid "graduate" volunteers were expected to revere Erhard as "The Source" and to follow an authoritarian bureaucratic regimen of service to the company.

A spin-off or front group of EST, The Hunger Project,

founded in 1977, does little to nothing concrete in the way of sending actual aid or advocating for structural reforms to relieve world hunger.[2] Instead, it teaches the mystical woo that hunger will end when a global shift in consciousness and attitude occurs where people "rethink their position" on world hunger. To bring this about, of course, meant sending donations and recruiting new members for The Hunger Project, creating an ever-widening circle of initiates who "rethink their position" on hunger, which will end hunger when enough people do this. Get it? The Hunger Project also has a reputation for trying to remove all critical information about itself from the Internet (gee, why does this sound familiar?)

EST did not happen all of a sudden in a vacuum; it evolved as a combination of techniques and philosophies which Erhard borrowed from Mind Dynamics (see below), Scientology, Zen, Gestalt psychology, Martin Heidegger's existentialist philosophy, Dale Carnegie's public-speaking and motivation seminars,[3] popular motivational books (of which the most influential were Napoleon Hill's Think and Grow Rich[4] and Maxwell Maltz' Psycho-Cybernetics[5]), and techniques Erhard developed and refined for training salespeople at the encyclopedia-sales companies he worked for.

Much of Erhard's original staff at EST consisted of people who had worked under him in encyclopedia sales, and who had come to see him as something of a brilliant guru due to the effectiveness of his sales training. He had also sent his salespeople to Dale Carnegie's seminars, Mind Dynamics seminars, Zen lectures by Alan Watts, and Scientology "auditing" sessions as part of their training, and attended them himself to learn what techniques he could borrow from them for his own sales training. He became a Mind Dynamics trainer himself; in 1971 he claimed to have a transformative experience while driving to work during which all these teachings suddenly clicked into synthesis and he "got it", and left Mind Dynamics within a month to start EST. Even a sympathetic biography[6] says he already had his own program in mind when he began attending Scientology auditing, Dale Carnegie seminars, and Mind Dynamics, and went to them primarily to learn what techniques he could appropriate for his own, making the timing of his "transformation" story rather suspect. (Compare the apotheosis of Kim Il Sung.)

Scientology placed Werner Erhard on its list of "suppressive persons",[7] claims he stole a lot of material and methods from them, and runs an "est repair rundown" session claiming to "undo the damage" done by est. Scientology was most likely behind a character-assassination scheme in which rumors surfaced of child molestation and tax evasion by Erhard, reported by CBS' 60 Minutes in 1991, both of which charges Erhard was later "cleared" of.[citation needed]

Although EST was officially retired in 1984, a nearly identical program (albeit minus the more abusive techniques of EST) has continued under other names, as "The Forum" from 1985–1990 and as "Landmark Education" or "The Landmark Forum" from 1991 to the present. Werner Erhard retired in 1991 and cut his ties to Landmark, turning it over to his brother and to former associates. Landmark's disclaimer warns that some participants "who have no personal or family history of mental illness or drug abuse have reported experiencing brief, temporary episodes of emotional upset ranging from heightened activity, irregular or diminished sleep, to mild psychotic-like behavior. An even smaller number of people have reported more serious symptoms ranging from mild psychotic behavior to psychosis occasionally requiring medical care and hospitalization. In less than 1/1000 of 1% of participants, there have been reports of unexplained suicide or other destructive behavior." Landmark Worldwide is currently the subject of a Wikipedia arbitration case.[8] The Hunger Project still exists under its current name and now claims to be completely independent of Erhard and the EST successors.

"Mind Dynamics" was a two-weekend seminar that operated from 1968 to 1973 that is considered something of a precursor to EST. Werner Erhard had been a Mind Dynamics trainer before leaving in 1971 to start his own program. Unlike EST, Mind Dynamics made medical claims for the program, claiming to teach using the power of the mind to cure diseases, which is why it was shut down in 1973 due to impending legal action from the State of California for fraudulent representation and practicing medicine without a license. Mind Dynamics also claimed to be able to teach clairvoyance, extra-sensory perception, mind reading, and other pseudoscientific silliness. EST never made such claims but appropriated the structure of the Mind Dynamics training and its guided meditation sessions called "processes".

"Lifespring" was a similar self-help seminar founded in 1974 lasting until the 1990s. It was widely thought of as an EST knock-off and indeed was founded by another former Mind Dynamics trainer. Lifespring was sued multiple times by attendees who claimed psychological damage from the program and the subject of investigative news reporting during the 1980s over reports it was even more abusive than EST. Many similar seminars are in operation today, many of them founded by former Lifespring trainers; sociologists have coined the term "large group awareness training" for these seminars (sometimes lumping in movements as diverse as Promise Keepers, Amway motivational meetings, and Dale Carnegie's public speaking seminars) and trace their origin and development back through Lifespring and EST to Mind Dynamics.

EST is often mentioned in discussions of just how narcissistic the "me generation" could be in the 1970s, and was spoofed in films like Semi-Tough and Spirit of '76, and books like Cyra McFadden's The Serial that poked fun at the excesses of California kookiness in the 1970s. Especially remarkable was how this bizarre movement pulled in a large number of seemingly liberal and progressive celebrities as participants and supporters: John Denver, Buckminster Fuller, Yoko Ono, Jerry Rubin, Raul Julia, and numerous others, and had them spouting incomprehensible EST psychobabble . est, the Esalen Institute and the Human Potential Movement featured prominently in episode 3 of Adam Curtis' 2002 miniseries The Century of the Self

.[9] In one episode, entitled There is a Policeman Inside All Our Heads: He Must Be Destroyed, former Yippie and collaborator of Jerry Rubin, Stew Albert,

[10] described Rubin's later est-inspired worldview as "socialism in one person, that, of course, is capitalism."

EST is also an important subplot in the TV series The Americans, in which Philip, a Russian spy, begins going to EST seminars in order to deal with his past and his double life.