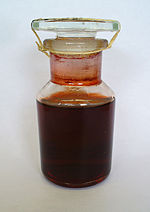 The avoidance of food dyes labelled "artificial" is a common form of food woo that is an appeal to nature. There is no reason to suspect that "artificial" colours are more likely to have side effects than "natural" food dyes. Additionally there's nothing particular about producing a colour that makes a molecule more dangerous; the majority of molecules are colourless. Those that do produce a colour are no more likely to be unsafe. Yet food woo fans are typically against all artificial colouring, even if a priori a natural colouring could easily be more dangerous than an artificial one (additionally, natural colorings, as well as the artificial dyes, have been reported to trigger allergic reactions such as cochineal, annatto, and saffron). This is not to say artificial dyes are inherently safe; the then-popular Scheele's Green

contained unsafe amounts of arsenic, and while it was used mostly in clothing and wall paint, it was documented being used in food. Aspects of chemical makeup, the nitty gritty detail, matter more than however "natural" its source is.

Artificial food dyes are popular because a lot of colors that naturally occur in nature just cannot be used to produce vibrant colors in food.[1] That being said, food dyes are frequently used to make food "look" more natural or "tasty" and thus more appealing, such as making margarine buttery-colored rather than lard-colored (it used to be pink in the 1870s due to pressure from dairy lobbyists trying to discourage people from buying margarine),[2] hot dogs pink rather than gray, or cheddar cheese orange rather than white. Artificial dyes can also come in an infinite variety in a lab and are much cheaper and easier to synthesize artificial dyes compared to processing materials found in nature. Artificial colors also have a longer shelf life and retain their colors usually much better than natural colors. Artificial dyes are originally derived from petroleum (and back earlier, from coal), but, thanks to identity and purity specifications, a lot of processing during the manufacturing ensures that not much trace of it remain.[3]

There were attempts to dye food in wildly unnatural colors such as ketchup that came in pretty colors like blue, orange, pink, teal, and green,[4] but died as fads as people generally prefer food in natural colors.

Some "natural" food dyes can make some people go ick, however, such as many people in the "West". Carmine (also known as cochineal extract), crimson lake, and natural Red 4, is derived from a cactus-dwelling bug (not a beetle), the female variant of cochineal

(Dactylopius coccus). It's a harmless dye aside from allergic reactions by some people, though this caused a bit of a stir with some people that don't like bugs in their food, but also was a problem for vegans and vegetarians. That stir did lead to Starbucks replacing the dye from their drinks[5] to lycopene, a compound derived from red-colored plant parts. So both the nature-lovers and the animal-lovers get to destroy some red fruits instead.[note 1] This isn't unique to Starbucks though, as the dye has been used for many other food products as well as cosmetics (people however hardly freak out about beeswax in their lip balm).

Before the onset of synthetic dyes that we now take for granted, however, with a very limited palette of colors humans could access, the bug was a popular dye used for clothing and paint in Mesoamerica for thousands of years, and this was a time where people, unaware of the dye, used cow dung and bullocks' blood to try to get a satisfactory red.[7] The introduction of American cochineal from Dactylopius coccus replaced a variety of related scale insects used for dyeing, including Porphyrophora polonica (Polish cochineal, Polish carmine scales, or St John's blood), Porphyrophora hamelii (Armenian cochineal or Ararat cochineal), and various species of Kermes; however these aren't commonly used for food.[8][9][10]

Most food in nature aren't all that blue, so blue is one of the most unnatural colors to give to a food. Blue is also a very challenging dye as historically, indigo loses its color quickly (if faded blue jeans are anything to go by).[11] Blue food dye is found mostly in foods most would associate with "artificial" and "unhealthy" and include sweets such as candy, cupcakes, soda, and ice cream, but they are used for cosmetics, medicine, and cleaning agents. Most of the blue coloring is derived from two colors: Blue No. 1 ("brilliant blue") and Blue No. 2 (indigotine). They can be also mixed with yellow dyes to create bright greens. As with the yellow dyes, some consumer advocacy groups including the Center for Science in the Public Interest, noted the dye may be linked to "being hyper" or "worsen tantrums", or, if they want to sound medical, attention-deficit hyperactivity disorder, though, with not much evidence. Despite this, they have effectively pushed pressure on companies to pull products with blue dyes, including Nestlé–Rowntree's removing blue Smarties (not to be confused with the tablet-like sweets in the U.S.) from the shelves.[12]

For nature woo and the paranoid CSPI, scientists did successfully isolate a blue color from a natural source called anthocyanin from red cabbage.[13] As for the Smarties, Nestlé–Rowntree did find a way to get the blue Smarties back after deriving the pigment from spirulina, from cyanobacteria.[12]

The idea that food dyes, the yellow ones in particular such as Yellow 5 (Tartrazine

), could cause attention-deficit hyperactivity disorder in children was first posited in 1970; yet in 50 years, no one has been able to provide sufficient evidence for this causation. There are a limited set of papers that showed effects, but in larger and meta-analyses, these disappear. As a result both the Food and Drug Administration in the United States, and the European Food Safety Commission, have concluded that they're fine for human consumption.[14] Despite this, various health warnings are still attached to such products: in the UK, products containing E102 (tartrazine), E104 (quinoline yellow), E110 (sunset yellow FCF), E122 (carmoisine), E124 (ponceau 4R), or E129 (allura red) must carry the warning "may have an adverse effect on activity and attention in children".[15]

Some companies such as Kraft and its blue box of mac 'n' cheese, more likely just trying to keep a good brand image for the all-natural crowd, have removed some food dyes in their products and replaced them with things like turmeric, paprika, and annatto.[16] They try really hard to promote their product as a healthy choice, but in the end, it's still just mac 'n' cheese.

This is an ubiquitous coloring agent that's used to give a brown to golden-brown appearance in food such as syrups, sodas, chocolate, bread, gravy, soy sauce, beer, and more. During the process of making caramel Class III or Class IV with ammonia (but not I or II), a byproduct called 4-methylimidazole (4-MEI) is formed. Some rat and mice studies exposing rodents at higher concentrations than humans normally are exposed to show rats forming lung tumors, but other studies are generally too small and inconclusive on its effects. The FDA believes that expected levels in food are negligible to cause any harm.[17]

There has been some protests to remove 4-MEI all together, which is impossible since it is a byproduct of the normal cooking process, though manufacturers have reduced 4-MEI from Class III and IV caramel. The Center for Science in the Public Interest has tried to get the FDA to remove caramel coloring from products,[18] while also alleging that the food with ingredients made from "unnatural" processes (as opposed to heating, though the FDA has stated that even cooking produces 4-MEI) is "contaminated" since it doesn't occur in nature.

According to a 2010 study by International Programme on Chemical Safety

, there is no toxicological difference between naturally occurring caramel from cooking and commercially produced caramel.[19]

Parents may scare children that if they eat too much of a food, they'll turn into it, and there is evidence that excessive consumption of some food dyes, including naturally-occurring ones, can result in skin color changes.

, a harmless disorder in which the skin goes yellow or orange. Carotenoids are used as food colorings and occur naturally in foods such as carrots; an excessive dose usually results from nutritional supplements or fad diets.[20]

Brilliant blue G, a derivative of the blue food dye FD&C blue No. 1, has been tested on rats as a treatment for spinal cord injury, in which context it gave some of the rats a blueish tinge.[21]