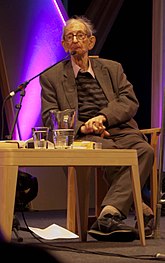 Eric Hobsbawm in 2011, looking old as all hell.

Eric Hobsbawm (1917–2012) was a British Marxist historian and author who enjoyed a radical leftist following. Hobsbawm had been a long-standing member of a number of communist organizations, including the Communist Party of Great Britain (no, not that one), and was known as a long-standing apologist for Soviet-style communism. As such, while Hobsbawm had an illustrious career as an educator, historian, and public intellectual,[note 1] he spent much of that career engaging in historical revisionism, glossing over the human rights abuses of the Soviet government.

See the main article on this topic: Stalin apologetics

Hobsbawm's defense of the Soviet Union goes all the way back to when he was a student activist in Germany around the time of World War II when he wrote a defense of the USSR's invasion of Finland and excused Stalin's non-aggression pact with Hitler.[1] While Hobsbawm did criticize the Soviet invasions of Hungary and Czechoslovakia — during which countless pro-democracy dissidents were killed by the Red Army — he never relinquished his membership with the Communist Party of Great Britain. And even though Hobsbawm was a signatory of a letter opposing the invasion of Hungary, he also authored a published letter defending that invasion.[2]

As a writer, Hobsbawm laughably tried to portray the Soviet regime as being much more benign than it really was, to the point where widely-recognized Soviet historian Robert Conquest asserted that he suffered from "massive reality denial."[3] In his 1994 book, The Age of Extremes, Hobsbawm imagined that Stalin had planned for several competing political parties and mixed economies in post-WWII Soviet-dominated Eastern Europe — the fact that the Soviet Union was established as a one-party state notwithstanding — and that only the evulz U.S. starting the Cold War derailed this benign scenario.[4] In his 2011 book, How to Change the World, he repeatedly dismissed Soviet crimes with simple declarations that they "need not concern us."[3]

On several occasions, Hobsbawm went to disturbing lengths to portray Soviet communism as the greatest thing ever made, no matter the human or moral cost. During an interview on British television, he reportedly said that Stalin's murders of 20 million people would have been justified if the Soviet promise of utopia had been fulfilled;[1] he later stated that because Soviet communism failed, these deaths were in vain.[5]

To each according to family[edit]

See the main article on this topic: Champagne communism

On his death, Hobsbawm left his estate of about 1.8 million pounds[6] to his family.[7]

It's worth noting that a text as basic as the Communist Manifesto advocates the abolition of inheritance.[8] He could at least have left his estate to a charitable organization or something. We're just saying.

On the other hand, a redeeming quality of Hobsbawm's move is that it allowed him to troll the Paulbots one last time from beyond the grave.[9]