Whole Foods Market Inc is a "natural" supermarket chain primarily in the business of selling overpriced organic fruits and vegetables, gluten-free just-about-everything (except for the gluten flour), and high-end touches like wine bars and exotic takeout items. The store has very high appeal to environmentalists and liberals but is a nightmare both for scientifically-literate skeptics and people with low budgets — which is how it’s earned the nickname "Whole Paycheck".

While it started in the US, Whole Foods has expanded to Canada and the UK, to their muted dismay.

On 16 June 2017, Amazon announced the acquisition of Whole Foods for $13.7 billion. Following the conclusion of the deal at the end of 2017, Whole Foods became a subsidiary of Amazon, substantially boosting Amazon's presence as a physical retailer.[2] It was an all-cash deal and the biggest transaction ever for Amazon.

Whole Foods began in that paradise known as Austin, Texas.[Note 1] It has over 430 stores, employs more than 91,000 people, and has gross sales of $14.2 billion and profits of about $0.5 billion each year. Altogether, it is the 8th largest supermarket in the U.S.[3] 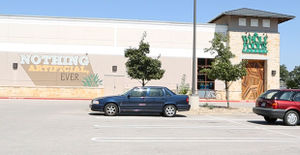 Because nature is better. (We presume that the walls, shelves, and cash registers are all naturally-grown, too.)

Whole Foods market is a huge supporter of organic foods only, making great efforts to minimize any genetically engineered food sold in their store and encouraging their customers to support the "Just Label It" campaign. Their website states, “We are the first national grocery chain to set a deadline for full GMO transparency and our GMO labeling goes further than the state laws and initiatives for labeling that are pending. This means we are the first to do a lot of this work and will be paving the way for those who follow."[4] In other words, Whole Foods is paving the way toward scientific illiteracy, since there is no scientific evidence that GMO food is harmful or of any concern for public health.

Whole Foods' entire argument against GMOs reads "Crops are currently modified to survive herbicide treatment, produce their own pesticides and resist certain diseases," which entirely fails to argue why any of this would remotely be considered a downside.[5]

Their plans to shame GM food have been suffering because almost all livestock in the USA are fed at least partly on GM corn while 90% of American cheese uses rennet produced by genetically engineered bacteria (in addition to coming from cows that are probably fed GM corn). This means that, in practice, almost no meat or dairy will meet their standards.[6]

Apparently, even Whole Foods' almost-entirely GMO-free shelves are insufficient for those of the InfoWars type, who link it to "deceptive industry marketing".[7][8][9]

For years, Whole Foods has been the center of bad press for overpriced foods.

On Last Week Tonight with John Oliver, John Oliver ridiculed Whole Foods for selling bizarre merchandise such as asparagus in a water bottle for $5.99, specialty honey for $79.99, and chocolate-flavored toothpaste for 11.99.[1][11]

According to a Bloomberg Intelligence study, a group of 20 common items used in the holiday feast was priced at $87.91 at Whole Foods versus $72.28 at Trader Joe's (another very pro-organic store, which itself is not known for low prices).[12]

Over the summer of 2015, New York City’s Department of Consumer Affairs announced an investigation into Whole Foods for "systemic overcharging for pre-packaged foods."[13] The agency tested 80 different kinds of prepackaged products at New York Whole Foods outlets and found all had mislabeled weights. The agency released the following statement: "Our inspectors tell me this is the worst case of mislabeling they have seen in their careers, which DCA and New Yorkers will not tolerate." For a store to be one of the largest promoters of the "Just Label It" campaign against GMOs while being called the store with the "worst case of mislabeling," this is incredibly ironic.

In response, Whole Foods has launched "365", a purportedly lower-priced brand.[14]

In 2015, the company recalled 44 products[15] over concerns about listeria contamination. While the company shuns safe GMOs, listeria can pose serious health problems including high fever, severe headaches, nausea, and diarrhea. It can also cause miscarriages and stillbirths and can be potentially fatal to young children and elderly people.

In 2014, all-natural 100% organic gluten-free maggots were discovered in the food sold at the Noe Valley Whole Foods store located in San Francisco. The maggots were exposed by Whole Foods employee Marc Melancon, who claimed to have seen over 40 maggots in a meat case.[16] The Whole Foods store claimed that they only found one wriggly fly larva in the display case, the Health Department confirmed what everyone already knows: If you see one maggot, there are more somewhere and ordered the meat department to completely clean all the floor sinks and drains, which may have been the source of the problem.

While the presence of maggots is disturbing, even worse was that the Whole Foods store was aware of the infestation and continued to sell the meat for 7 hours after the maggots were discovered. In a later interview, Mr. Melancon admitted that he now feels bad he continued to sell the meat to customers, knowing that there were maggots in it.[17] But hey, maggots and rotten meat are a very natural thing of life. Let this be a lesson again: natural does not necessarily mean good.

What is this shit?

Whole Foods goes beyond wanting people to eat healthy by selling them "alternative" remedies to medicine, one of which is homeopathic medicines which are little more than snake oil.[5] Whole Foods won’t sell the pain relievers aspirin and ibuprofen because they’re not "natural" in spite of aspirin being appropriated by the altie community;[Note 2] to fill the gap, the "Whole Body" department sells a wide range of nutritional supplements,[5][18] because nothing says "natural" more than stalking the shelves grabbing plastic supplement bottles made from a factory, well aware that humans have evolved for thousands of years with their fragile normal nutrient deficiency that requires supplementation to survive while every other animal seems to do fine without supplements.

The book section and magazine stands are not immune to pseudoscience and quackery. Copies of pseudoscientific magazines like What Doctors Don't Tell You (a British export magazine) can be found at Whole Foods. Books like The Coconut Oil Miracle and Herbal Medicine, Healing, and Cancer, which was written by a theologian, can be found in the book section.

See the main article on this topic: Paleo diet

Whole foods sells the Paleo Living magazine (which is all about Paleo diets) and a variety of products from "Nom Nom Paleo".[19][20] As a result, it's been endorsed by paleo dieters.[21]

All employees of the company can look up the salary of any member of the company, and vast amounts of company data are made public to their employees.[22][23] The average full-time employee makes $19.16 an hour, and the company has been listed on FORTUNE magazine's "100 Best Companies to Work For" for 18 consecutive years.[3]

That said, there was one rather displeased employee.[24]

In contrast to the appearance of such a company, its co-founder John Mackey appears to be largely libertarian. He wrote, "I’m an unabashed, complete free-enterprise capitalist enthusiast. I see business as fundamentally heroic … [but] it could be so much better.”[25] The idea of paying your employees well enough that they don't need any state or federal aid would seem to be an ideal move for someone who is truly seeking to minimize the role of government in people's lives; it's a shame more don't take Mackey's approach in this regard.

Whole Foods has made efforts to be a green leader on the environment, such as being the first US supermarket to eliminate disposable plastic grocery bags,[26] buying fish from certified sustainable fisheries,[27][28] and ensuring animals were treated humanely.[29]

However, they did not join a consortium of retail industries aimed to create an industry-wide sustainability index for the lifecycle of products. Further, Whole Foods CEO John Mackey argues that there is no scientific consensus regarding the causes of climate change.[30]

In 2009, Whole Foods CEO John Mackey wrote an opinion piece in the Wall Street Journal that began with a quote from Margaret Thatcher and argued that Americans do not have an intrinsic right to healthcare. Soon thereafter, a large number of customers got on Twitter and started a boycott. Unlike most critics of Obama's health initiatives, Mackey offers eight alternative libertarian reforms.[31]