Greco-Roman religion is an umbrella term used to refer to many religious traditions practised within the Roman Empire and eventually syncretized and assimilated into something resembling a complex whole. It originated largely in the pre-existing mythology of ancient Greece, which was appropriated by the Romans into their own religious practices. In its latter years, when it competed with Christianity, it was referred to by followers of that religion as paganism. 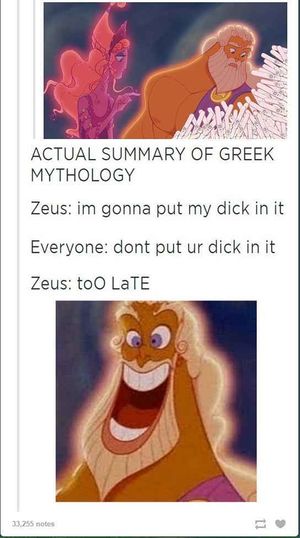 We know about Ancient Greek religion from reading sources such as Homer and Hesiod. Hesiod synthesised a wide range of earlier Greek traditions in his work Theogony. The Theogony describes the creation of the world out of chaos, and the Succession Myth tells how the original chief god Uranus was overthrown by his son Cronus, who was in turn tricked and defeated by his son Zeus. Zeus was the youngest of Cronus's six children, the main gods and goddesses, namely:

These six gods in turn had various children in different combinations, producing a pantheon considered to reside on Mount Olympus.

The Greek pantheon (the Greek word is a collective noun expressing the idea of a gang of gods) was large, dominated by the Olympian gods and goddesses (Zeus, Hera, Aphrodite, etc.) but also containing many regional gods which the Hellenes added as they encountered new peoples with different gods. The major pantheon of Greek gods themselves is likely based on a set of Indo-European myths that have been lost, but which would have influenced the Greeks (through the Minoans and the Mycenaeans), the ancient Hindus, the Norse, and the Middle East (Sumerians, etc), each of which share similar structures in the organization of their gods: Indra and Zeus, for example, or Parvati and Gaia.

When the Romans appropriated the religion they changed many of the gods' names; Zeus became Jupiter, Poseidon became Neptune, Hades became Pluto, etc. Native Roman gods such as Terminus were also preserved from earlier traditions, producing the Greco-Roman blend.

That said, Roman mythology had its own set of unique myths, and it is inappropriate to think that they were merely copycats. For example, the Roman god of time and agriculture, Saturn, was often depicted as wise, elderly, and kind. Meanwhile his Greek "counterpart" Cronus was depicted as a tyrant who castrated his father and devoured his children in a bid for power. Furthermore the Greeks were also guilty of being copycats themselves, as they often appropriated Egyptian deities such as Isis into their pantheons.

Besides thus losing the support of a sector of the intelligentsia, the outland conquests of Greece and Rome repeatedly saw the traditional cults undermined by imported mystery cults, such as that of Bacchus in the early second century BCE and that of Mithras two centuries later, which gained large followings among the common people. They, along with philosophical traditions such as Manichaeism, became popular enough that the emperor Diocletian, the first "absolute" ruler of the Roman Empire, undertook religious reforms intended to restore the Olympians to their former stature.

Christianity did not gain the upper hand until force was employed against the Pagans. In CE 312, the Roman emperor Constantine converted to Christianity after a victory in battle against another contender for the imperial throne. Within a few years, he removed all legal restrictions on Christianity in the Edict of Milan. The Christians then began roving about smashing Pagan shrines in spite of laws set up to protect them. Also, Constantine and his successors began almost immediately to proscribe Pagan rites and work on converting the population to Christianity by force, culminating in the total ban on Pagan rituals in 392. Increasingly isolated pockets of Pagans survived for some centuries longer; notably Hypatia of Alexandria, murdered in 415 in the midst of a religious dispute, and the Maniots, inhabitants of a mountainous region in southern Greece, who were the last Greco-Roman Pagans to be Christianized, in the 9th century.

Greco-Roman deities, helped by lots of works in popular culture derived from them and their mythos, are now present in modern paganism with the practicioners including from people who try to be as historically accurate as possible to standard eclectic paganism that includes practices certainly not used by ancient Greeks and Romans as Tarot reading and the like, and everything in between.

Historical blending of the religions[edit]

Throughout most of Western history, the retellings of the Greek and Roman myths were done in a way that treated the whole of the ancient Greco-Roman world as having had a single monolithic religion rather than dozens of diverse cults. This was largely because the myths were viewed through the lens of Christianity, which tended to lump all the different cults together under the label of "paganism," and did not care much about the distinctions between them. As G.K. Chesterton put it, "The term 'pagan' is continually used ... as meaning a man without any religion, whereas a pagan was generally a man with about half a dozen."[1]

Modern scholars, using techniques that put the old myths back in context, have documented much more extensively the rich and complex religions that existed across the Hellenic world.