CO2 is Green, along with its sister organization Plants Need CO2, is a global warming denialist pressure group in the United States which lobbies against the classification of carbon dioxide as a pollutant. These organizations argue that since carbon dioxide is a vital chemical for plant life, more of it can only be a good thing, and that any reduction in CO2 output would be harmful to the ecosystem and the economy.

This is analogous to saying that blood is good for you as it supports your body's critical functions, so you should be in favor of having gallons of blood forcibly injected into your veins. The idea that we should be pumping CO2 into the atmosphere is seen as complete and utter nonsense by anyone with any experience or knowledge of ecology, atmospheric chemistry and climate change.

Unsurprisingly, the CO2 is Green and Plants Need CO2 groups are the creation of the fossil fuel industry: specifically Leighton Steward, retired vice chairman of Burlington Resources oil and gas company, and Corbin J Robertson Jr, chief executive of Natural Resource Partners, a coal resourcing corporation, both based in Houston, Texas.[1] Plants Need CO2 is a 501(c)(3) non-profit organization, which classifies them as a charity and makes donations tax-deductible,[2][3] while CO2 is Green is a 501(c)(4) organization, meaning contributions are not tax-deductible and that the organization is allowed to engage in lobbying and similar activities.

CO2 is Green, with its aim of "educating" the public on the alleged dangers of reduced carbon emissions, has launched newspaper and television advertisements in several states.[4] The TV ads feature a montage of aesthetically-chosen nature film footage and a soothing voiceover affirming that "higher CO2 levels than we have today would help the earth's ecosystems and support more plant and animal life."[5]

The CO2 website urges readers to write to their Senator, Congressman, and the Senate Committee on Environment and Public Works, protesting against the classification of CO2 as a pollutant.

There are two central claims made by the CO2 is Green pressure group: firstly, that carbon dioxide is not a pollutant, and secondly that more of it will make the world better. Both are very wrong; at best they are simplifications of real science and twisted semantics; at worse, they are outright fraudulent claims.

If we define a pollutant as something actively and instantly harmful, carbon dioxide is not a pollutant. If we define it as something that can cause serious environmental problems and destabilize natural systems when present in elevated concentrations, it certainly is a pollutant. We suspect that CO2 is Green are playing around with their definitions when they make this claim. The nature and activity of a pollutant depends on concentration, bioaccumulation, and other factors — even the most harmful substances in the world have little or no effect in sufficiently small doses, while even some of the most benign can be devastating in high doses. The simple facts are that carbon dioxide is known to be a greenhouse gas,[6] and there's a hell of a lot of it that's out there now that wouldn't be if we hadn't burned millions of years' worth of carbon fixation in the form of fossil fuels. 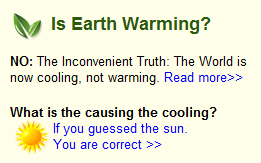 Extract from the CO2 is Green website.
That's right folks, the sun is cooling the earth! (Quick, use lots more carbon fuels before it's too late!)

The second claim — that more CO2 will benefit the world — has absolutely no backing in reality. In the case of CO2, it's not that the molecule itself is a dangerous pollutant or actively harmful, but rather that high concentrations of it have a much different effect than low concentrations. CO2 may be "plant food" in the basic, Sunday school version of how carbon cycles around the Earth, but this emphatically does not mean that more is better. It's true that in a broad sense, more CO2 will tend to increase plant growth, but it doesn't affect all plants equally. Most worrisome, while crop species like extra CO2, it turns out that weeds absolutely love extra CO2. The result is that the tendency for extra CO2 to increase weed growth can negate the benefits of extra CO2 for some crops that are deemed as more important,[7] though the weed used in the experiment (common amaranth

) has been eaten as a vegetable by both Indians and Indians. The real question here is not whether or not those CO2 emissions would reduce the amount of crops that we eat, but if we would want to eat plants that would grow better under high CO2. Keep in mind that if those reality shows about eating strange food have taught people anything, it's that it is extremely difficult to eat something entirely different.

Soil nutrients also tend to be a long-term limiting factor in the the growth rates of plants per land area, and any short-term benefit from excess CO2 is quickly lost as nitrates, phosphates, and other essential nutrients for growth are permanently consumed.[8]

Moreover an increase in atmospheric concentration will accelerate the greenhouse effect, warming the planet, and plants will hardly be in need of all this extra food if they're all dying because the climate is changing too quickly. Some corollaries:

Plants are not the only sink for carbon dioxide. Most of it is permanently stored by being dissolved in the oceans. As the oceans warm up, the solubility of gases goes down (this is the reverse situation of the solubility of solids – think of the explosive fizzing when you open a warm bottle of a soft drink). Thus as the oceans warm they can't absorb as much CO2 — so there'll be more of it in the atmosphere. More CO2 in the atmosphere leads to more warming, and the cycle continues in a positive feedback loop.

Of course, the main problem is that carbon dioxide is transparent. Like the CO2 is Green agenda, one might say.

When ionised, it glows a nice blue-white or pink colour, which is almost the complete opposite of green.[11]