From RationalWiki
Jump to: navigation, search
Not affiliated with, nor to be confused with, the highly-respected Doctors Without Borders.

Homeopaths Without Borders (HWB) is a non-profit organization whose stated mission is "to provide humanitarian aid, homeopathic treatment and education by serving as partners with communities in need."[1] Essentially, they go to nations with sub-standard healthcare, and dilute it even more to make it 10-430 times as good as the healthcare in wealthier nations.

Are these guys affiliated with Doctors Without Borders?[edit]

Doctors Without Borders (also known as Médecins Sans Frontières) is a well-respected international humanitarian organisation that sends health professionals to the most dismal and needy parts of the world. As well as providing emergency medical relief, it lobbies for the right to healthcare and maintains a wide range of international preventive medicine projects. Essentially, these are the guys you want to see arriving when there's a medical crisis, and in fact in certain parts of the world they'll already be there on the ground before the crisis hits. This is what international humanitarian organisations do.

Homeopaths Without Borders is a different matter. Information about this group is limited mainly to pieces found on pro-homeopathy websites. An Internet search for Homeopaths Without Borders" returns no mainstream news sources. Most of the results are from pro-homeopathy websites, either extolling the virtues of homeopathy or offering remedies. HWB is upfront about its lack of association with the more commonly known humanitarian group. Perhaps choosing a less confusing name would have obviated the need to include the legend "Not associated with Doctors Without Borders" on each page of their website.

The name Médecins Sans Médicaments would be more appropriate, yet still carries the risk that homeopaths could be confused with people practicing medicine. Given the confusion, one would think that the homeopaths could instead offer their services to Médecins Sans Frontières. This plan is stymied by the problem of medical organisations being reluctant to enlist adherents of a profession that is barely one step removed from witch doctors throwing chicken bones in order to rebalance the "humors".[2] This is a reminder of why homeopaths are placed in the category known as alternative medicine. Any alternative medicine that is proven to work would be medicine, and relief efforts by mainstream groups would prominently feature Hahnemann's bottle-bashing homeopaths.

Haitian Vodou (priests of which are pictured above) offers strange beliefs and cures to ailments. Homeopaths seek to compete with Vodou priests on their own territory.

In January 2010 Haiti was struck by a 7.0 magnitude earthquake, leaving 160,000 people dead, and a shattered infrastructure. Governments and aid organisations responded swiftly to this disaster, Doctors Without Borders and the American Red Cross being prominent contributors, among others.[3][4] Along with the more established aid givers came those who saw the disaster as an opportunity to proselytize and demonstrate the effectiveness of their ineffective treatments.[5]

Homeopaths Without Borders arrived in February of 2010 and promptly set their master plan into operation. Much of the account here is taken from the HWB website. HWB volunteers began treating people for a range of issues, including "burns, physical trauma and injuries, fear, dizziness, headaches, urinary tract infections, eye problems and dehydration. Hunger was an underlying factor."[6] Assuming light burns and mild trauma, the bulk of these ailments will cure themselves. It's unlikely that MSF or the Red Cross will be referring any critical cases to the homeopaths. 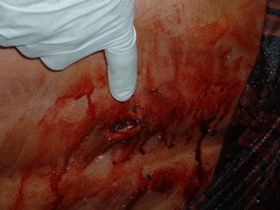 Ah, a bullet wound. I'll fix that up with a 30x preparation of saltpeter and lead. Hey, where are you going?

In the best case scenario the homeopaths would provide harmless water and sugar pills to people while giving them moral support and company while they heal naturally. Perhaps they'd act in a complementary fashion to real doctors in much the same way that most homeopathy fans with serious health issues would tend to take medicine alongside their homeopathic fancies. The problems begin when homeopaths overreach themselves by interfering with medicine or by claiming their placebos to be effective against life-threatening ailments. In the update, HWB describes the need for "remedies to treat dengue, malaria, cholera and other tropical diseases." This is serious business! Malaria and cholera kill, and in the case of cholera, over 900 Haitians died in one month.[7] Homeopaths tend to use the term "remedy" to describe their preparations, and given the context, the conclusion appears to be that they intend to deploy homeopathic remedies. It is unlikely that the homeopaths ever got to preside over any significant slaughter through negligence and delusion of Haitians. The lack of press coverage indicates that the presence of homeopaths was largely inconsequential in the context of the greater tragedy that unfolded.

The updates close with the good news that the University of Notre Dame in Port-au-Prince was to introduce a homeopathy course leading to a certification from the totally real American Medical College of Homeopathy in Phoenix. A lecture is mentioned and 120 nursing students attended. The writer of the story did not see fit to record the fits of laughter that the nursing students hopefully let out when the homeopaths shared their childlike befuddlement.[8] Religious missionaries rely on belief and demonstrably false assertions ascribed to a long-dead "Messiah" whose research consisted of documenting his own very curious view of how he thought that things should work. Homeopathy is completely different in that… Well, it just is!