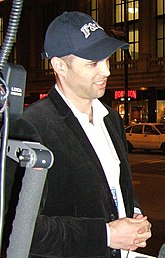 Matt Taibbi (1970–) is the son of Edward R. Murrow Award-winning journalist Mike Taibbi and an incredibly snarky motherfucker who currently writes for Rolling Stone. His style is hard to describe, but it's something like one part Mencken, one part Hunter S. Thompson, and one part Gen X cynicism.

He is an atheist and, while not related to the skeptical movement, has written on fundamentalism and 9/11 conspiracy theories. In his book The Great Derangement, he describes his experiences as both a deep cover fundie and Truther. At one point, he infiltrates the ministry of the whackjob preacher John Hagee, revealing Hagee's ties to Israeli lobbyist groups. His office was also picketed by Truthers after he called them "insane" and "deranged" in his blog. Those posts are also now completely spammed with Truther comments about him being a gatekeeper and Mossad agent.

Born in the sewer: the eXile[edit]

Together with Mark Ames, Taibbi ran an English-language tabloid in Moscow, Russia called the eXile, which lasted from 1997 to 2008. the eXile was characterized by "its high-low mix of acute coverage and character assassination, sermonizing laced with smut",[1] but the tabloid was also characterized by the two men who ran the paper, who were known "singly or in combination, children, louts, misogynists, madmen, pigs, hypocrites, anarchists, fascists, racists, and fiends."[1] If it wasn't bad enough that they may have been some of these things in a general sort of way, the duo also misogynistically attacked specific women.[2][3]

Taibbi has gotten embroiled in further controversy over his recent work on Wall Street, the housing bubble, and his latest book Griftopia. In the book, he referred to Alan Greenspan as "the biggest asshole in the universe" and in an earlier column called Goldman Sachs a "great vampire squid wrapped around the face of humanity, relentlessly jamming its blood funnel into anything that smells like money." This set off controversy and drama in the political blogosphere, most notably when McMegan attempted a poor excuse for a rebuttal to his Goldman piece.[note 1] The Goldman piece became so famous that the bank's spokesman came out and denounced it as "a collection of conspiracy theories" and then failed to deny the factual accuracy of the piece.

Taibbi is probably the only person who can write a sentence including the words "credit default swap" and "fucking asshole" and manage to make it humorous, making him one of the few journalists around today who's worth a damn. He has repeatedly dumped on the media for shilling for Bush's wars, misreporting the financial crisis, and general hackosity. In an appearance on Hardball with Chris Matthews, he said of Michele Bachmann: "This morning outside of Penn Station, I saw a guy huffing glue out of a paper bag and he made more sense than Michele Bachmann was making."[4]

In 2014, he left Rolling Stone to start a new blog at First Look Media

focused on "the ongoing financial crisis – and… the political machinery that makes it possible."[5] However, he departed First Look after several months without publishing anything due to conflicts with the company's management, and returned to Rolling Stone.

Taibbi has stated that he thinks Trump most likely colluded with Russia, but that a lot of mainstream media have lately indulged in a form of Trump-Russia conspiracy theory hysteria (i.e. "Putin derangement syndrome") where even the most extreme theories are taken seriously, and anyone who doubts them is branded as being part of the plot.[6][7]