Illuminati: The Game of Conspiracy is a tabletop card game designed by Steve Jackson in the 1980s. Each player takes the role of a secret society vying for world domination (e.g. the titular Illuminati) and plays with various cards that take comical looks at conspiracy theory memes beloved by the tinfoil hat brigade: subliminal messages, the Knights Templar and so forth. The game was inspired by the Illuminatus! Trilogy books, written by Robert Shea and Robert Wilson in the mid-1970s.

In a hilarious turn of events actual conspiracy theorists, such as David Icke and Cutting Edge Ministries, failed to see the satire, noticed the similarities between the cards and their own beliefs and concluded that Jackson knows the truth.

This is based largely around two cards in particular. One, titled Terrorist Nuke, shows two skyscrapers resembling (in the way any grey blocks would) the World Trade Center, one of which is exploding in roughly the same place that it was hit by the plane in real life. The other is titled Pentagon, and shows the building in flames. Although admittedly striking, Occam's Razor says coincidence.[note 1] (Also, the Terrorist Nuke is from the 1995 Illuminati: New World Order trading card game, and the WTC had been already the subject of a terrorist bombing attack in 1993.

There is also the fact that the World Trade Center was destroyed by two airplanes, not a nuke, but this didn't stop Cutting Edge: "One can only ask: was a micro-nuclear device used at the base of the Twin Towers as well? That kind of small, but nuclear, explosion would account for the sudden manner the reinforced concrete and steel shell simply crumbled into dust as it fell."[1] An "ex-Satanist" claims that the broken fuselage and wingtips of an airplane can be seen in the drawing,[2] but the grey chunks could just as easily be bits of the building.

How many games are there, actually?[edit]

The original Illuminati was released in the 1980s and there have been several re-releases. The game has also several spin-offs and expansion packs, but the conspiracymongers usually assume that there is a single game and mix all the cards despite that they have been released in different years as parts of different products. This is significant because some of the claims center around the dates of events and the (assumed) release date of the game, claiming that particular cards are prophetic of those events.

A lot of the weird interpretations of the cards are underpinned by the interpreters' lack of general knowledge, especially about things and events predating the twenty-first century. 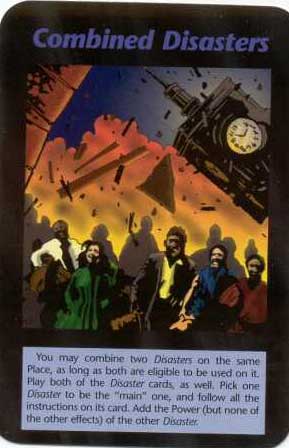 A card taken to predict, variously, the 2005 London bombings, the 2011 tsunami in Japan, the 2011 riots in England, and an atrocity that was supposed to occur (but never did, unsurprisingly) during the 2012 Olympics at London.