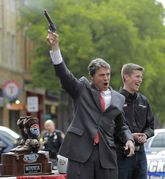 Rick Perry, aka Governor Goodhair,[2] (1950–) aka Governor Oops is the former Republican governor of the State of Texas who ran for the presidency twice and failed to get the nomination both times but got to be Secretary of Energy from 2017 to 2019 as a consolation prize. He was Governor of Texas from 2000 when he was appointed to succeeded George W. Bush, until 2014 when his Attorney General Greg Abbott succeeded him. He was one of the contenders for the Republican nomination in the 2012 presidential election but dropped out on January 19th and endorsed Newt Gingrich.[3]

Rick Perry is an amorphous political animal. Before he was a conservative hate-monger in Texas, he was as blue a Democrat as there ever was. He supported Al Gore during the 1988 Presidential race but was not, as commonly stated, his campaign manager (that has its origins in a 1998 attack ad by a Democratic then-opponent of his).[4] One thing you can bet on is that Rick Perry will do what is good for Rick Perry, even if it means killing innocent people.

Perry is the sort of guy we can trust to run the Energy Department as scrupulously, fairly, and honestly[5][6][7] as he ran his home state of Texas. Which is a scary thought, indeed. He has a love for oil bordering on fetishistic.

By 2014, Perry had presided over 278 executions, the most of any modern governor.[8] Second place goes to George W. Bush, who's not even a contender, with 152.[9] He also vetoed a bill prohibiting the execution of mentally handicapped people.[10]

In just one high-profile case, that of an alleged arson by Cameron Willingham, Perry, worrying more about political expenditure and his image of being "hard" on crime than someone else's life on the line, called the evidence anti-death penalty propaganda[11] and went forward with the execution even though the defendant's lawyers produced evidence indicating that the investigation had been seriously flawed.[12] The prosecution relied heavily on the evidence of a fellow prisoner who later changed his story. Five years later, Perry interfered with the workings of a state panel investigating the case by dismissing several commissioners on the eve of some crucial testimony, raising accusations of a cover-up.[13][14]

More recently, Perry allowed the execution of Mexican national Humberto Leal García, despite serious flaws in the prosecution. Notably, García was not informed that he had the right to consular support which is guaranteed under international law. His US-assigned attorney missed out on challenging the prosecution's key evidence and presenting mitigating factors, while the Mexican embassy could have provided a professional legal defense but did not learn of the trial until after the conviction. Perry apparently feared that killing a man who didn't deserve the conviction delaying the execution might alienate Republicans in the run-up to his presidential campaign.[15][16]

Perry's preferred way of dealing with problems is apparently to pray them away, although his success rate leaves a lot to be desired. When Texas was hit by a severe drought in the spring of 2011, Perry's reaction was to proclaim a three-day "Prayer for Rain", personally taking charge by leading several public prayer sessions himself. In a predictably sadistic fashion, God responded by turning the heat up, and the drought and wildfires continued to devastate Texas farmlands all through the summer.[17] Never one to be dissuaded by such minor setbacks, Perry made his personal relationship with his god a cornerstone of his nascent presidential campaign. When asked how he would go about fixing the nation's numerous problems, he responded:

In August 2011, shortly before kicking off his 2012 campaign, Perry attempted to put his plan into practice by organizing a huge prayer event ("The Response") in Houston. Apart from raising concerns about the separation of church and state, this event was also notable for featuring a number of extremist evangelical pastors, including old favorites like David Barton and members of the American Family Association.[19][20] This time, God's response to The Response came in the form of a massive stock market crash. Oh, Yahweh, you silly guy, you.

It seems like Perry's not quite over his problem with pandering to evangelical fucknuts at every turn; he's recently opined (in a conference call with the equally happy-go-lucky Rick Scarborough) that "spiritual warfare" is necessary to combat the very idea of separation of church and state because some dude with a pitchfork and horns is apparently the one behind the concept[21] and not the actual framers of the Constitution.

Perry has ties to the New Apostolic Reformation, a bunch of Pentecostals who seem hell-bent on turning America into a theocracy.[22] Rick Perry's prayer rallies were organized by (arguably) this crazy New Apostolic Reformation. They also have apparent connections to Michele Bachmann and Sarah Palin. Oh, and they think Oprah Winfrey might be the Antichrist.

On at least two separate occasions, Perry has argued that Texas has the right to secede from the union and suggested that he might be prompted to follow through with it.[23][24] Perry has repeatedly associated himself with neo-Confederate groups, received support from them, and campaigned for preserving Confederate monuments.[25] While the rest of the country would probably rejoice if Perry and his followers buggered off and constrained their madness to their own state, it's still treasonous and illegal to attempt to break up the union.

In August 2011, in comments aimed at then-Federal Reserve boss Ben Bernanke, Perry declared that printing more cash (known as quantitative easing) was "treasonous in [his] opinion" and suggested that Bernanke had better stay out of Texas, lest he come to harm.[26] Even his Republican colleagues found those remarks a little unpresidential.[27][28]

During Perry's 2011 campaign to become a Republican Presidential nominee, he released "Strong",[29] a video espousing his view of important matters for America. Was this the ongoing war in the Middle East? The poverty faced by average Americans? The economy? Jobs? Nope; it was all about where you stick your giggle-stick and how you can't force children to pray in school. In an America where as many as a quarter of the people may not actually identify as "Christian" and where the majority do support same-sex marriage, this has been almost universally considered to be out of touch and plainly bigoted. Just to show there's no out-of-context bullshit here, this is the full transcript of the standalone message:

I'm not ashamed to admit that I'm a Christian, but you don't need to be in the pew every Sunday to know there's something wrong in this country when gays can serve openly in the military but our kids can't openly celebrate Christmas or pray in school. As President, I'll end Obama's war on religion. And I'll fight against liberal attacks on our religious heritage. Faith made America strong. It can make her strong again. I'm Rick Perry and I approve this message.

The video quickly became one of the most disliked on YouTube, ranking alongside the likes of Rebecca Black and Justin Bieber for downvotes.[30] A host of parodies appeared to take the piss even further. One asking what other unpopular opinions Perry held[31] and one cartoon by YouTuber DarkMatter2525 effectively translating it into what he actually meant.[32]

It's probably worth letting George Takei have the last word on that one.

During his non-campaign to be Archbishop of God's Only Party, Politico released a photo of a hand-painted sign posted at the entrance of Perry's hunting camp. Apparently, the not-racist-one-bit Perry family hunted at a camp known as "Niggerhead Ranch". Perry claimed that the sign was already there when he started leasing the land in 1983 and that he ordered it painted over the moment he decided to run for political office laid eyes on it. Seems his underlings took the better part of thirty years to get round to this chore, and Perry never followed up.[33] He could have just rickrolled that thing outta there. It's kinda hard to quantify what is the worst aspect of this story: the fact that Rick didn't personally, immediately paint over the offensive sign the instant he saw it back in 1983 or that the discovery of the sign didn't seem to have much of an effect on his chances in the race.

In 2014, Perry argued that Cliven Bundy's blatant racism was irrelevant; it was his property rights that mattered (claims to Federal property that courts repeatedly decided he had no right to use). A Perry minion later said that Perry thought that Bundy's racist remarks were reprehensible.[34]

In 2015, Perry argued that Dylann Storm Roof's cold-blooded slaying of 9 African Americans in a historic South Carolina civil-rights church was not motivated by racism and that it wasn't his easy access to guns that mattered but his illegal drug use.[35] Roof's racist manifesto, as well as racist photos that featured Roof, were revealed the very next day after Perry shot his mouth off.[36]

Perry's wingnuttery wouldn't be complete, of course, without a generous dash of anti-science in the form of creationism and more. In fact, he hand-picked the now-notorious creationist dentist Don McLeroy to serve on the Texas State Board of Education and then appointed another creationist when he was voted out.[37] On the campaign trail, Perry officially endorsed presenting creationism as a viable alternative to evolution in state schools:

The Washington Post's Fact-Checker has granted Perry its Pinocchio award to indicate exactly how reliable he is on global warming.[39] On that front, he calls it "all one contrived phony mess that is falling apart under its own weight".[40] He also subscribes to a climate science conspiracy:

Under the Perry administration, the Texas Commission on Environmental Quality erased climate-related references in one of its reports.[42]

Legislative hijinks on behalf of wingnuts the unborn[edit]

In June 2013, the Texas legislature attempted to pass an omnibus abortion bill that would tightly restrict abortions in Texas; the law was on its way to passing (despite receiving "help" in the way of a bizarre statement from state Representative Jodie Laubenberg, who claimed that an exception for rape and incest was unnecessary since "rape kits" could get a woman "cleaned out")[43] until state Senator Wendy Davis staged a filibuster in order to prevent it from being passed by the midnight legislative adjournment deadline.[44] The bill failed despite Davis' filibuster being ended by a rules vote due to vocal intervention by protestors in the gallery[45] and despite some additional chicanery concerning a timestamp on the actual vote.[46] Perry – who is nothing if not a persistent brand of wingnut – immediately called for a special legislative session to pass the bill[47] and made predictably condescending noises that Davis "hasn't learned from her own example" of being a teenage mother.[48] To her credit, Davis only called Perry a breaker of legislative rules and not just a complete idiot despite ample proof.[49]

In 2014, he surprisingly endorsed decriminalizing marijuana and states' rights to legalize (or criminalize) abortion and same-sex marriage, saying "then people will decide where they want to live."[50]

Lack of future in politics[edit]

All aboard the Trump train[edit]

Rick Perry was subsequently named by then-President-elect Donald Trump as his nominee for Secretary of Energy. And it was not the least bit terrifying that the guy responsible for nuclear weapons, who was replacing the former chair of the MIT Department of Physics, was an animal science major with a D in a class called "Meats". Perry's nomination has got to be the equivalent of Trump giving his stubby middle finger to the world because Perry famously could not remember the third department he wanted to eliminate during a 2011 presidential debate, this department turned out to be the Department of Energy; oops![54] Perry dropped out of the presidential race shortly after that gaffe.

As Energy Secretary, Perry was identified as one of the "three amigos" assigned to pressure Ukraine in an attempt to get them to investigate Trump's political rivals.[55] Press reports suggested that Perry was looking to exit the Trump administration before the end of 2019, (doing so in December)[56] and will likely spend his retirement enjoying subpoenas and answering questions about his role in the Trump-Ukraine scandal.[57][58]