From RationalWiki
(Redirected from Joseph Ratzinger)
Jump to: navigation, search

Pope Krampus "Good, good. Let the hate flow through you."

Benedict XVI (born as Joseph Aloisius Ratzinger in 1927), formerly known as "Cardinal Panzer",[No, not The Onion] was the Emperor Pontiff of the Roman Catholic Church from 2005-2013, and the first German Pope in a loooong time.[2]

The only notable thing about his papacy was wearing red shoes (which he later ditched). What a game-changer.[3]

He resigned from the Papacy at the end of February 2013. Rumours circulated that he did so because he feared scandal.[4] He became the first pope in almost 600 years to step down from his position.[5]

Before becoming the Vicar of Jesus Christ, he was known as Joseph Cardinal Ratzinger, head of the Congregation of the Doctrine of the Faith, which is the modern name for the same Office in the Curia which was once known as the Roman Inquisition. Cardinal Ratzinger was well-known as a fanatic about doctrinal orthodoxy, putting him in a league with such apologist superstars as Josh McDowell and R.C. Sproul. Ratzinger was so ideologically conservative that he earned the nickname Doctor No. That, and a (mandatory) stint as a young child in the Hitler Youth, also led many to refer to him as the Nazi Pope or the Panzer Pope. However, Ratzinger was too young to be fully responsible for being in Nazi uniform. (It should be noted that he has promoted Jewish-Christian reconciliation by writing a book that includes a refutation of Christ-killer myths.)

Pope Benedict touches a child.
See the main article on this topic: Child sexual abuse in the Roman Catholic Church

As early as January 1980, Ratzinger, at the time an Archbishop, chaired a meeting discussing Fr. Peter Hullermann who had forced oral sex onto an 11-year-old and abused three other children. Hullermann escaped being reported to the police and, with Ratzinger’s formal approval, Hullermann was moved to a new diocese. Advice from Hullermann’s doctor that he should be supervised closely and kept away from children was flouted.[7] Hullermann reoffended any number of times during twenty odd years after that but was only once convicted. During the 1990s, Ratzinger’s department at the Vatican and the diocese apparently developed a system of asking abusive priests to repent without reporting them to the police. Reinhart Marx helped Pope John Paul II cover up a scandal involving a "priest H" and became a Cardinal at an unusually early age.[8]

Palpatine on his throne.

Ratzinger knew about the deviant predatory sex including raping his own children that Fr. Marcial Maciel

was doing in Mexico, but dragged his feet over acting. After becoming pope Benedict did not defrock this monster or hand him over to the police. Instead Marciel was ordered to live a quiet life in the USA and avoided bad publicity.[9]

In March 2010, Benedict XVI was accused of protecting another paedophile priest, Fr. Lawrence C. Murphy, who is alleged to have molested around 200 deaf children in his care at St. John's School for the Deaf in St Francis, Wisconsin.[10] Benedict was working at the time for the Vatican investigating, among other matters, child abuse by priests. An archbishop wrote to Benedict's office complaining of the actions of Murphy, and yet no action was initially taken.

"If Ratzinger really wants to play inquisitor that much, why doesn't he go deal with his pedophile priests?"

When a canonical trial was finally scheduled, Murphy wrote to Benedict demanding the trial be cancelled, a request which was granted despite strong objections from another archbishop. Three archbishops complained about Murphy but the priest was protected from the police and moved to a new parish where he had further access to children.[11]

In 2001, Benedict XVI, then the Prefect of the Congregation for the Doctrine of the Faith, had a letter sent to bishops worldwide, advising them to keep allegations of child sex abuse within the church. At the time Benedict's group had assumed responsibility for the investigation of allegations of sexual abuse, to which their approach appeared to be trying to deal with such problems without the need to involve the legal authorities. The letter stated that the church had jurisdiction over such matters, and that information relating to abuse must be kept confidential until 10 years after the victims reach adulthood. Critics commented that the directives were designed to obstruct justice.[12]

Benedict appeared to have forgotten this letter when he blamed the Irish Catholic Church for its abuse issues, and it certainly slipped his mind when he blamed church sex abuse scandals on increasing secularism within society.[13] Incidentally abuse has been going on in the Roman Catholic Church since well before society became as secular as it is now, so nice little handwave you've got going there.[14] In the 19th century, there was at least one cover-up that was similar to what happened more recently.[15] In Benedict's defence, he was in his late seventies (now over 80) and morally bankrupt. Secularism may have helped create an environment where people are not as much in awe of the Church (any church) as previously and some victims are prepared to speak out.

In 2011 there was an attempt to make Benedict XVI answer for his far reaching and continuing failure to protect children before the International Criminal Court.[16]

One case suggesting ongoing abuse is that of Megan Petersen of Minnesota, who alleges she was raped repeatedly as a child and disturbingly adds that the culprit still has access to children and vulnerable adults.[17] Benedict plans to live out his retirement within the Vatican where it will be harder for law enforcement to reach him.

How deep did it go?[edit]

Papal zeal in protecting paedophiles has fueled rumors about Benedict's own behaviour,[18] though no clear evidence has emerged that the retired pope personally did more than protect perpetrators. 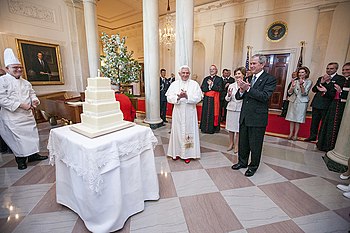 Benedict with George W. Bush in the White House, 2008.

While still strongly conservative, he was more noted for his emphasis on the love that the church should show to the world than for his insistence on doctrinal purity. In many cases, actually demonstrated leniency for heterodox priests in Spain and Latin America. Towards the end of his tenure, however, the insistence on doctrinal purity came back into focus, especially with regards to homosexuality.

Benedict was also somewhat critical of Silvio Berlusconi's recent discriminatory actions towards Roma[19] - more so than most of Berlusconi's political opponents, anyway.

Benedict in the Popemobile.

In 2007 Pope Benedict decided that Limbo was never anything but a theory,[20] one which unlike the heliocentric model of the Solar System has never been officially condemned or warranted executions, so presumably all the unbaptized babies and those who lived before the time of Jesus are being tortured eternally in Hell for not being born into the right set of circumstances to receive salvation.[21] The Pope's basis for discontinuing the Catholic Church's extended universe cosmology was that limbo was only ever unofficial B canon and not official A canon,

and hasn't been included in the catechism since the 1990s.[22] However previous non-canonical sermons referencing limbo will still be reprinted under the Catholic Church: Legends label.

Pope Benedict XVI, before becoming Pope, wrote a defense of theistic evolution examining the insufficiency of "selection and mutation." Humans, he insisted, are "not the products of chance and error," and "the universe is not the product of darkness and unreason; it comes from intelligence, freedom, and from the beauty that is identical with love." Obviously, this point of view is not supported by science.

Neither will any evolutionary scientist claim that humans are a product of chance and error.

Benedict's formal position was that birth control in any form is unacceptable to the church, even to prevent the transfer of AIDS in countries where it is a daily reality for a large segment of the population. He publicly stated if a prostitute is already sinning by being a prostitute, he or she should not compound the sin by using a condom.

When discussing Angola, and the rise of "unspeakable sexual violence" (the Pope's words), he used his time there to bash abortion and to bash those advocates who suggest that women facing such horrors ought to have the legal option of abortion so that they were not carrying a rapist's child. He said of these raped women: "How disconcerting the claim that the termination of life is a matter of reproductive health!"

2005 visit to a German synagogue[edit]

During his 2005 address to the Synagogue of Cologne, he blamed the holocaust on Nazi Germany's embrace of neo-paganism (i.e., the Völkisch movement

), but laid none of the blame on Christian anti-semitism in Germany or with specific members of the Catholic Church who were allied with the Nazis.[23][24]

See the main article on this topic: Papal visit to the UK 2010

The Pope's 2010 visit to the UK was the subject of numerous controversies. These included the cost to the taxpayer for hosting and security, the background of the abuse scandal, a cardinal describing the UK as a Third World country because of its multiculturalism, and the Pope's repeated attacks on "extreme" atheism and secularism.