From RationalWiki
(Redirected from Neo-paganism)
Jump to: navigation, search

Neopaganism is a series of religious beliefs, often polytheist, animistic or pantheist in nature. Although some Neopagan practices draw inspiration from pre-Christian European religions, essentially all of it was dreamt up since the late 19th century. Prominent Neopagan faiths include Wicca, some variants of Asatru[note 1], and neo-Druidism. Due to its syncretic, anti-dogmatic, and highly personal nature, Neopaganism can be seen more as a subculture than as a religion.

As a general rule, faiths such as Hinduism[note 2] and vodun[note 3] are not considered part of the Neopagan community; rather, the term is usually understood to refer to any sort of mish-mash of ideas that are mostly from pre-Christian European religious traditions. Amusingly, some Neopagan beliefs are based on false Christian propaganda about "heathen" practices.

Neopagans (at least the ones who aren't connected to the neoreactionary movement) are usually pretty tolerant, because they aren't that keen on convincing you or your children (or even their children) to follow their religious beliefs. And, they will only turn you into a newt if you really piss them off. (Also, more often than not, they're fighting amongst themselves anyway, if only to try to get rid of the crazies like Kevin Carlyon.)

There is a wide range of beliefs within Neopaganism, depending on which path is being followed. Neopaganism is not based on doctrine. Most Neopagans follow the code 'if it harms none, do what you will'. Their beliefs tend to centered broadly around these concepts:

Neopaganism is a very diverse religion, so practices are specific to the individual. It must be noted that not all Neopagans believe in the value of Tarot card readings, crystal metaphysics, or the significance of horoscopes. Naturalistic Paganism, for example, supports science and is skeptical of the supernatural. 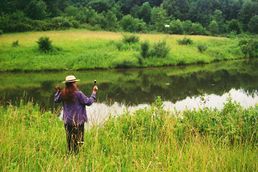 Nature is an important part of Neopaganism.

Some (but not all) Neopagans may take part in the following practices:

It is often said within Neopaganism that "you don't become a Pagan, you realise you are one". Therefore, in the spirit of public education, here are some signs it may be of interest: 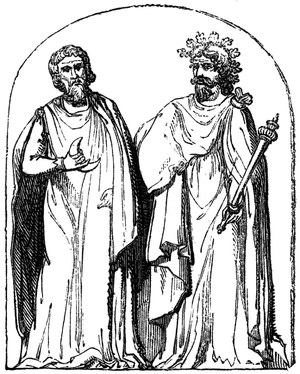 I bet those robes have lousy AC

A druid was a leather-wearing caster class with strong ties with Nature and that can turn into animals a pre-medieval Pagan priest. They were a learned class in Celtic culture but mostly disappeared by the end of the 2nd century CE after being suppressed by the Roman Empire. They lived in trees and are claimed to have built Stonehenge, even though it was built thousands of years before the first druids arrived in that region.

Many New Agers and/or Neopagans[note 4] like to imagine that they are also magical druids; this is known usually as "neo-druidism" or "druidry". Well, there's no problem with that, since the Druids were just normal, imaginative, power- and spiritually hungry people, too — and their occasional use of human sacrifice was just a minor character defect.

An entire subculture has grown out of the Neopagan movement to recreate the religion of the druids, casting them into this innocent, apolitical, nature-worshiping farce of a group, when in reality the druids, like the Sadducee of ancient Palestine, and the Brahmins of India, were in fact part of the ruling class, and held great political control for generations.

We know very little of them, except what is written about in texts by the Greeks and Romans - but those are potentially biased, as both groups wanted to destroy the Celts at various points.

There is, however, one surviving ritual, The ritual of oak and mistletoe that modern "druids" the world over hang their hat on, as the centerpiece of the druid religion. Of course, there's no reason to think this one ceremony was the equivalent of Easter or Christmas or bedtime prayers, and not, say, of St. Sebastian day.

Some groups, particularly Asatru, "Hellenic Reconstructionist", and "Celtic Reconstructionism" prefer the term "Mesopaganism", to denote the fact that they try to reconstruct (as much as possible) the ceremonies and faith of older, "Paleopagan" faiths (such as the ancient Norse and Greek religions.) The term "Mesopagan" is used to denote the fact that they know they are not fully the same as the old groups (due to the loss of so much information), but to also distinguish themselves from the Neopagans who instead prefer to forge a completely new path. Most Neopagans consider Mesopagans to be further members of the overall umbrella term, but there is sometimes tension between the two groups as well.

It should be noted that owing to the necessity of hewing as closely as possible to historically attested rituals, Mesopagans do not adhere to most of the beliefs and practices enumerated above (there's no record of crystals or tarot in any record of Greek religious practice, although oddly sex and wine do figure into a lot of practices).

Neoshamanism is a form of neopaganism in which the practitioner fancies him/herself a bridge between the material and spirit worlds. Most neoshamans know something about the popularized version of shamanism, but have done very little real study into the spiritual beliefs of actual shamans, instead focusing on "spirit animals" and "vision quests." Despite the Manchurian roots of the word shaman, most neoshamans describe themselves as continuing a Native American tradition. Most Native Americans are not amused,[1] hence terms like "plastic shamans".

Others, largely involved in Nordic reconstructionist paganism, practice a variety called seiðr, about which little is known historically, except that it was taboo for men to practice it. Modern-day practitioners typically borrow from Finnic and Turkic elements instead.[2]

More nutters, in the early morning glow of the sun. That hat looks especially traditional.

"Celtic religion and "Celtic Neopaganism" is an attempt by those practising new age "religions" to show that their beliefs stretch back to the dawn of time and not to, for example, Victorian romanticism. This is a variation on the noble savage where the beliefs of an ancient peoples are given credence because they were "closer to nature". Generally "facts" are cherry-picked or made up. Notable beliefs are:

The Celtic culture spanned roughly 1,000 years and was widely dispersed, from Spain and Ireland in the west, across France and central Europe to parts of modern-day Turkey.[4] Though the religions of Celtic cultures shared some aspects, they were varied and specialized. And we know virtually nothing about them.

One of the observers of the tribes of Celtic Britain was Tacitus who wrote on historical events in Britain during the Roman conquest. Another was a Roman geographer called Ptolemy who wrote a description of Britain, listing the names of 27 British tribes and their distinct customs and material culture. [5]

The above should not be confused with "Celtic Reconstuctionism" (see Mesopaganism), which puts more emphasis on historical documents (the relatively few that exist anyways) and tries to recreate Celtic Paganism closer to its original form. As such most Reconstructionists show little interest in runes, tartans,[7] the Stonehenge, and tend to frown on more New Age practices being conflated with Celtic Paganism.

As it's difficult to be a Celtic Reconstructionist without being familiar with at least some Celtic history. Most Reconstructionists tend to get annoyed by the misconceptions perpetuated by the group above, seeing them as ranging from being simply ignorant to being opportunists trying to rip off tourists.[8] While this may be appear to be bordering on Judean People's Front territory, the distinction is important for distinguishing between somebody using it purely as an excuse to push woo or somebody who is actually trying to honor long-dead ancestors and cultural practices.

Because parties are fun, one of the main manifestations of this interest in the Celtic is the celebration of Beltane and Samhain (on April 30 and October 31). These are promoted as an alternative to other celebrations with which they coincide in the calendar: May Day and Halloween. The historical evidence for these is limited, and largely from Ireland, but that doesn't stop Celtic Nationalists and Pan-Celticists from celebrating elsewhere, particularly in Scotland. Partly because it's fun to have bonfires and get drunk (please, don't do both at the same time), and partly because anything which differentiates you from the English appeals to some people on the impoverished, enslaved northwestern fringes of the British Empire.

There is some archaeological evidence of tombs in Ireland oriented with the position of the sun at Samhain[9]. This indicates that the approximate date had some significance, but tells nothing about how they celebrated it or what it meant to them. What accounts exist come from Christian monks and other Christian writers.[9] Such writers are not a terribly reliable source: they would tend to be hostile to pagan practices, and other contemporaneous Christian documents such as the legends of Saint Columba contain a large amount of implausible and nonsensical material.

There are many Irish legends of violent death, sacrifice, and other bloody happenings on Samhain. The legendary kings Diarmait mac Cerbaill and Muirchertach mac Ercae reportedly both died on Samhain, fulfilling a prophecy. King Crimthann of Munster was murdered on Samhain by his sister. Accounts of Samhain celebration are more recent. A week-long festival of drinking, gathering, and contests is described in Serglige Con Culainn (Cúchulainn's Sickbed), which survives as a 12th century manuscript (apparently edited from earlier texts) and a 16th century copy. Geoffrey Keating's History of Ireland (Foras Feasa ar Éirinn), completed in the 1630s, is also often cited as an authoritative source despite its extreme distance in time and a lack of clarity about Keating's sources.[9][10][11]

Beltane is mentioned in old legends as a time of bonfires and celebrations; it corresponds with celebrations of the coming of spring such as the English May Day. Again Geoffrey Keating is considered a prominent source for Beltane. The Welsh celebrated Calan Mai around the same time, which was considered a time for divination and contact with the dead (much like the autumnal Halloween, the Day of the Dead, etc). All these celebrations of spring involve common springtime motifs like flowers, and generally drunken dancing.[12] Their timing is linked to events in the agricultural and pastoral calendar, and it is hard to tell which motifs are coincidental and which are shared.

There are attempts to claim that Celtic holidays such as Samhain are part of an underlying Celtic culture found in large parts of north-west Europe.[13] This appeals to Pan-Celticists who seek community between nations and personal identity in claiming to be part of a Celtic people. However the historical evidence is that Samhain in particular was solely an Irish thing.[14] Beltane was marked not only in Ireland but also apparently in parts of Scotland and maybe elsewhere in the British Isles; certainly there were fire festivals in spring, although their origin and meaning remains mysterious.[15]