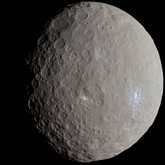 The goddess of agriculture barren rock in all her glory.

Ceres is the largest body in the asteroid belt and the closest dwarf planet to the Sun, being named after the Roman goddess of agriculture, cereals, and fertility in general (a.k.a., Demeter for the Greeks). It orbits our home star at a distance of around 2.8 AU and has a diameter of roughly 960 kilometers.

Ceres was discovered in 1801 by the Italian astronomer Giuseppe Piazzi, who was among other astronomers in the search for a planet that was predicted to exist between a rock and a hard place Mars and Jupiter. When its orbit was determined at the end of that same year, it was clear it was the thing they were looking for… for a time at least.

From planet to asteroid and (dwarf) planet again[edit]

Ceres at first was classified as a planet and remained so for slightly more than fifty years, alongside the other large bodies discovered in that zone of the solar system, those being Pallas, Juno, and Vesta. However, with the discovery of other objects in that region of the solar system, all of them far smaller than the "Big Four" of yore, they were downgraded to the status of the newly created "asteroid" category of solar system objects, they were crowned the largest members of what's currently known as the asteroid belt, using a naming system that consists of a number that indicates the approximate order of its discovery and its name (1 Ceres, 2 Pallas, 3 Juno, 4 Vesta, and so on). Almost a century and a half later, attempting to clean the mess left by the discovery of so many large bodies in the outermost regions of the Solar System, the International Astronomical Union

finally decided what counts as a planet, what's not a planet but instead a dwarf planet, and what's not any of those two things. Ceres was downgraded to dwarf planet specifically because, while it was massive enough to have gravitationally rounded itself, and was not in orbit of any other solar system object aside from the sun, it still hadn't cleared its surrounding orbital neighborhood of debris, that being asteroids, meteors and such.

If all of this sounds familiar, it should. It's the same thing that happened to Pluto.

Ceres is big compared with the other asteroids, having one-third of the mass of the whole asteroid belt and being almost twice as large as Vesta, the second in size (Ceres' major axis measures 965 kilometers versus 573 kilometers of Vesta's axis.)[1][2]

For many years, Ceres was just a star-like thing about which little more than its orbit, approximate diameter, and surface composition were known until the Hubble Space Telescope

, followed by other powerful scopes, were able to see there some surface features that amounted to little more than bright and dark spots. Things changed a lot in 2015, when NASA's Dawn spacecraft entered in orbit around Ceres after a leisurely journey (nope, Dawn did not need to dodge asteroids as the Millennium Falcon in The Empire Strikes Back) that included a year spent orbiting the asteroid minor planet small Solar System body Vesta

, and began a deep study of this object that lasted until October 2018, when the probe ran out of fuel to orient both its solar panels and antenna to communicate with Earth and was left in a highly eccentric orbit around it.[3]

Things to see in Ceres[edit]

What Dawn has found so far is a body scarred by a lot of craters. They have low relief, indicating the very likely possibility of that under Ceres' crust lies water ice, maybe with liquid water mixed in, as well as in many cases bright spots that were suggested to be composed of water ice but that now are thought to be a mix of magnesium-sulfate brines and ammonia-rich clays. The most conspicuous of them often has a haze over it, symptoms of water vapor outgassing leaving behind the aforementioned salts.

Another interesting feature is the Ahuna Mons

mountain, a big pyramid-shaped mountain near Ceres' equator that has a height of around 6 kilometers. Its slopes have bright streaks of what looks like salts like those already mentioned that have been found in some Cerean craters, and recent research suggests is a volcanic feature perhaps formed by the impact that created the Kerwan basin, the largest known crater in this asteroid minor planet.

Both the bright spots and the pyramid-shaped mountain have fueled aliensdidit speculation.[4] When NASA polled the public about the cause of the bright areas, 10% agreed with scientists that it was salt and ice deposits, but 40% said "other".[4] The top commenter on NPR's "Two-Way" wrote, "I'm not saying it's aliens. But it's aliens."[4]