Blackface is a style of theatrical makeup in which a white person's face is painted to portray a black person, which is a patently racist caricature of Black people. The terms "redface" or "yellowface" have also applied when a white actor portrays a Native American or Asian character, respectively. These portrayals are types of ethnic impersonation.

Blackface was popularized by "minstrel shows", a regular feature of nineteenth century vaudeville and circus entertainment in the USA, in which white performers in blackface performed songs or comical scenes, often promoting various negative "darkie" stereotypes. "Jim Crow" was an archetypal minstrel character dating from this era, after whom the term Jim Crow laws (for enforced racial segregation in the Southern states) is named. Some minstrel shows included African American performers, wearing the same blackface makeup as white performers: the audience may well have been unaware which minstrels were actually black.

"Tom shows", plays and performances adapted from Harriet Beecher Stowe's abolitionist novel Uncle Tom's Cabin, were another popular blackface act from this era. Like Stowe's novel, Tom shows promoted an anti-slavery message but included many of the racist stereotypes common to minstrel shows and other popular depictions of black people.

One historian, Thaddeus Russell, argues in a piece attempting to defend blackface that it would be a mistake to characterize the performances as expressions of mere hostility to African Americans; he believes that white audiences found something enviable in the depiction of the carefree lives of slaves:

It should therefore be no surprise that, though they certainly never expressed a wish to be enslaved, the white men who invented blackface performance often sang of a wish to be like slaves. Their songs celebrated the free, joyous, and sensual movements of slave dances — which were condemned by Victorian moralists as barbarous — and the slaves' relaxed attitudes toward love and work.[1]

There are parallels here with the Western world's fascination with orientalism, the "Arabesque", the "noble savage" and other condescending romanticizations of non-white peoples and cultures during the nineteenth century.

Minstrel shows declined in popularity during the late nineteenth and early twentieth century, though the style of makeup and mannerisms they had popularised continued to appear in popular entertainment, including early cinema. A notable example is the extremely negative portrayals of African Americans by blacked up caucasians in the 1915 silent epic The Birth of a Nation, a racialist portrayal of American history that explicitly promoted the Ku Klux Klan.

Al Jolson was the most famous minstrel performer of the twentieth century, often performing in blackface, including scenes in the 1927 movie The Jazz Singer, one of the first feature films recorded with sound. Though Jolson is often retrospectively associated with the hateful connotations of most blackface minstrel acts, and his performances perpetuated many of the traditional stereotypes, he was regarded by contemporaries (and many music historians) as very sympathetic to black people and influential in popularising black (or black-influenced) music.

Blacking up in film and television[edit] 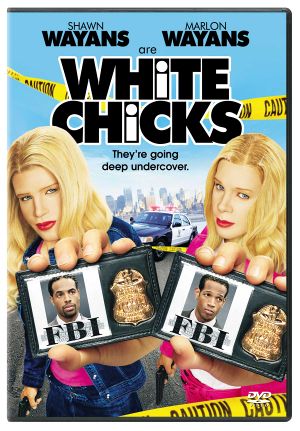 White actors have often used brown makeup to change their appearance when playing a black person, or person of another dark-skinned ethnicity. This makeup is more realistic and less exaggerated than the cartoonish blackface of the minstrel era, but tends to be regarded as racist and unacceptable due to the blackface tradition, especially in recent decades with increased concerns about political correctness.

For example, Billy Crystal's blackface impression of Sammy Davis Jr. at the 2012 Oscars provoked widespread controversy and condemnation, although he has performed a Sammy Davis routine regularly since the 70s, which had usually been well received.[2]

The BBC sketch show Little Britain has often included white comedians (Matt Lucas and David Walliams) blacking up to play outrageous black characters, though strangely it has received relatively little negative criticism for this. Despite this, Lucas has expressed remorse at "play[ing] black characters" and making jokes about transvestites in the politically incorrect series, adding "Society has moved on a lot since then, and my own views have evolved."[3] The tradition actually lasted longer in the UK than in the US, occurring on primetime TV, most famously in The Black and White Minstrel Show

's Christmas specials in 1976[5] and finally in 1981.[6] These were done in typically minstrelsy fashion (Are You Being Served? probably serving as a parody for The Black and White Minstrel Show in 1981). Although these programmes were popular at the time, in hindsight they are generally considered an embarrassment on the BBC's reputation in recent years.

To make excuses for blackface today, people like to bring in the 2004 comedy film White Chicks,[citation needed] in which two black male characters disguised themselves as white girls; this would appear to be aiming at an entirely different genre of humor. The 2008 action comedy Tropic Thunder features Robert Downey, Jr. in a blackface role; in the film he portrays a Method actor whose total identification with his role, that of an African-American soldier, is milked for comedy. There is also the 1961 book (and 1964) movie Black Like Me, about the experiences of a white man who darkened his skin temporarily with dermatological dyes and recorded his experiences in the American South, which would also seem unrelated.[7]

The estate of Nina Simone has called for a boycott of the 2016 biopic Nina, which stars Zoe Saldana, in dark makeup, afro wig, and prosthetic nose.[8][9] Simone's brother Sam Waymon was also highly critical of the film's casting and of the portrayal of Simone's openly gay assistant Clifton Henderson as her love interest.[10]

Blackface is or has been used in various performing and carnival traditions throughout Europe. For example, some British Morris dances are traditionally performed with one or all of the dancers' faces painted black. Origins of these traditions are not always clear, with suggested explanations including:

Zwarte Piet ("Black Pete") is a character in Dutch folklore, who is a sidekick to Saint Nicholas (Santa Claus). In St Nicholas's Day celebrations (held in early December, as a separate festival from Christmas), Zwarte Piet is portrayed by performers or children in blackface, often (though not always) as a minstrel-like caricature of black people. This tradition is increasingly condemned by the international community but remains widely popular in the Netherlands, despite the annual controversy over whether to scrap or sanitise the tradition (the Dutch version of the "War on Christmas").[11]

The 2015 controversy surrounding former NAACP president Rachel Dolezal's racial identity sparked debate on the nature and politics of race. After appearing in public with a person claiming to be her African-American father, her biological parents in Montana outed her as of white European origin. She maintains that she identifies as "black" (not African-American), an identity she's lived since 2007.[12] It was also revealed she tanned her skin and wore Afro wigs and braids.[13] Ezra Dolezal, her adopted African-American brother, claims what she is doing is analogous to "blackface".[14] 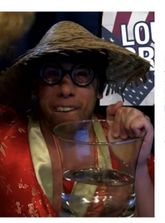 Yellowface is the somewhat parallel phenomenon of white performers being made up to portray Chinese, Japanese or other East Asian people in theatre, television and film. Often, these yellowface performances both reinforce and embody all negative stereotypes — mono-syllabic accent, slanted eyes, buck teeth, small stature, and untrustworthy demeanour. As with blackface, it varies from relatively light (and usually unconvincing) changes of appearance, such as Joseph Wiseman's portrayal of Chinese villain Dr. No in the James Bond film of the same name (1962), to more grotesque and offensive portrayals, such as Mickey Rooney's portrayal of Mr Yunioshi, Audrey Hepburn's Japanese neighbour in Breakfast at Tiffany's (1961). The decision to cast John Wayne as Genghis Khan in The Conqueror (1956) is widely considered to be one of the worst casting decisions ever made.[16][17]

Recurring yellowface characters in early and mid-twentieth-century cinema (played by various white actors) have included Chinese-American detective Charlie Chan and the villain Dr Fu Manchu, one of the most popular examples of the exotic Asian villain trope.

The 2012 film Cloud Atlas garnered substantial criticism over its use of yellowface, despite the fact that the film uses yellowface to promote a New Age-like "we are all one" sort of message, precisely the opposite of the othering and stereotypes the most offensive works promoted. The directors responded by stating that they "need to cast critical eyes toward these things."[18]

Important criticism of Cloud Atlas was directed at the casting of a white actor to play a substantial Asian role, while the actor's other character was a white man who spent much of his time sick in bed. The use of white male actors to portray people of color (POC) betrayed a bias in Hollywood that undermined the film's message. White male actors are the default, while all women and POC are interchangeable.

Another example of yellowface is the 1982 Australian film The Year of Living Dangerously, in which a white actress Linda Hunt, was cast as male Chinese photographer Billy Kwan. To her credit, she won an Oscar for her performance. No Asians were auditioned for the role, despite the story being set in Indonesia and filmed in the Philippines.

Cameron Crowe's Aloha uses Yellowface as Emma Stone, a white woman, was cast, as a half Asian woman.

Of course, CGI will help with this: for the Hollywood adaptation of Ghost in the Shell, they tried using computer graphics to make their white actors "look Asian".[19]