From RationalWiki
(Redirected from Lost tribes of Israel)
Jump to: navigation, search 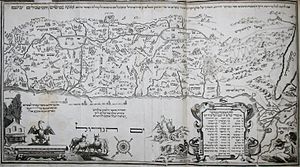 As readers of the Old Testament know, the ten lost tribes of Israel are those Jewish tribes that did not accept Solomon's son Rehoboam as their king upon Solomon's death. These tribes formed the Kingdom of Israel, or the Northern Kingdom; the two southern tribes formed the Kingdom of Judah, which outlasted the Northern Kingdom and in which the religion ancestral to today's rabbinic Judaism was formed.

There are multiple accounts of what the Twelve Tribes were — with no two lists in the bible agreeing with each other.[1][note 1]

Traditionally, the tribes of Israel, named after the twelve sons of Jacob, are:

Of these tribes, Levi did not receive a specific allotment of land; they were granted the Cities of Refuge and various other towns distributed among the other territories. Joseph had two sons, Ephraim and Manasseh; they became two separate tribes, and there is no tribe of Joseph in those terms.

The actual Biblical text is relatively clear as to what happened to the lost tribes of Israel. They were conquered by the Neo-Assyrian empire around 722 BCE. Earlier Assyrian conquests had already conquered part of the Northern Kingdom's territory; in this first forced population transfer, "the king of Assyria went up against Damascus, and took it, and carried the people of it captive to Kir." (2 Kings 16:9). The remaining parts of the Northern Kingdom lingered for several more years as a tributary state of Assyria, until the Assyrians doubted their loyalty. Then:

Successive deportations of the Hebrew people out of the Northern Kingdom into Assyria.

So the Bible says straightforwardly when and where the Israelites were taken, and history loses track of them under their former names at this point. Some were sent to the kingdom of the Medes, in present day Iran. But the notion that the tribes were "lost", rather than scattered and losing their distinctiveness as a people, assumes that they somehow survived in hidden form, waiting to be recognized.

At any rate, the Israelites were not wholly lost; some remained on the land around the capital of the Northern Kingdom, which was Samaria by Mount Gerizim; these are the Samaritans, who preserve the original Hebrew alphabet[note 2] and a version of Judaism based entirely on the Torah and parts of the Book of Joshua. Bad blood between Samaritans and Jews forms part of the backdrop of the teachings of Jesus. A small number of Samaritans continue to this day.

See the main article on this topic: British Israelism

Despite this, various people seek to claim the "lost" tribes as illustrious ancestors. This is also fostered by the later reappearance of the several lost tribes in apocalyptic and Messianic prophecies. In Revelation 7:5-8, a cohort from most of the tribes is "sealed" for special blessings at the end of the world:

Note that the original tribes of Dan and Ephraim are omitted entirely from this list. More glaringly, Joseph's tribe was split into Manasseh and Ephraim (his sons); if Manasseh's tribe is here, why is Joseph still here?

Apparently getting into this blessed host is better if you get in as a tribe member. This motivates a number of Christian claims which identify the scattered tribes with contemporary nations. Chief among these theories is British Israelism, which holds that something called the "British nation" descends from the tribe of Ephraim, while the United States continues Manasseh.

Protest by Falasha in Israel

Here are some of the many claimants to being one of the lost tribes, in roughly decreasing order of likelihood:

While the Israelites are the best known, there are various other legends where part of an ancient people wanders off and starts a new life some other place. Perhaps this is akin to the desire to imagine your real parents are royal and you have princes and princesses for brothers and sisters.