Memorials for the victims of the Tree of Life synagogue shooting in Pittsburgh, Pennsylvania.

Mass shooting means a number of people shot in the course of a single incident by a single criminal or a small group of criminals. The overarching goal for these individuals is to kill as many people as they can.

During the last 30 years, the United States had 78 mass shootings, more than 2 per year on average. By contrast there were 41 mass shootings in 24 other wealthy, industrial nations during the same period. Greater gun availability does not prevent mass shootings.[1] Perpetrators are most of the time men while women and children are disproportionately the victims, girls more so than boys.[2]

Media coverage of a mass shooting show future perpetrators how to do it. Extremist ideology can convince a person extreme violence is justified and many different ideologies can facilitate extreme violence.[3]

See the main article on this topic: Gun control

Tough state laws on gun procurement did not protect California from mass shootings because nearby states have much easier access to firearms and guns can be transported between states as easily as cars can. From 2009 to 2015 states insisting on background checks suffered 52% fewer mass shootings than states without background checks. Background checks also reduce the numbers of women shot dead during domestic violence and the number of police shot dead. The National Rifle Association pressured the US Federal government not to allocate funds for gun control research.[5] One has to wonder that they have to hide.

Violent video games have been blamed for mass violence. Donald Trump and others have made this claim.[6] 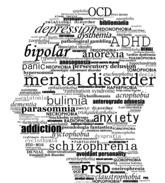 Notice how "evil" is not included in the list of diagnoses.

The National Rifle Association has called for a registry of people with mental illnesses.[14]

In fact, people with mental illnesses only perpetrate a small amount of gun violence.[15] They much more likely to be victims of violence or to harm themselves.[16]

Media speculations have pointed to autism as a potential cause for mass shootings,[19] stigmatizing an already isolated and under-supported group of people.

However, the reality is that autistic people are less violent than average. Research has shown that autistic children tend to be less aggressive than non-autistic children, with any outbursts usually being the result of provocation.[20] Autistic adults are less likely to commit crime.[21] Research shows that being on the autism spectrum reduces the risk of violent behavior.[22] Autistic people, however, are more likely to be victims.[23]

Nevertheless, autistics pay the price. For example, 17-year-old autistic Jack Robison was accused of being a terrorist for his scientific curiosity in creating explosives with household chemicals, setting them off in the woods away from other people, and filming the results; it took a year-long battle for all charges to be dropped.[24] Another autistic teen, a quiet and nonviolent boy who has been bullied to the point of PTSD, was targeted by rumors at school that he was the reason for the school's lockdown.[25] Research shows that exposure to claims about autism causing violence leads to negative attitudes towards autistic people.[26]

This crime-related article is a stub.
You can help RationalWiki by expanding it.
Retrieved from "https://rationalwiki.org/w/index.php?title=Mass_shooting&oldid=2149761"
Categories:
Hidden category: