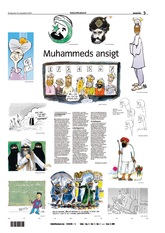 In September of 2005, the center-right Danish newspaper Jyllands-Posten solicited from their graphic contributors a series of political cartoons featuring the Islamic prophet Muhammad.

This stunt was contrived to violate the rule in Sunni Islam against images of the prophet, in contrast with liberal Western concepts of freedom of the press. An editorial was also printed criticizing self-censorship. The motivation for this was that author, Kåre Bluitgen could not find anyone willing to illustrate his book about Muhammad. Some of the cartoons were offensive only in that they violated the taboo against depicting Muhammad. Despite this others drew attention to the aggressive, violent side of many branches of Islam. One, for example, showed Muhammad asking a crowd of suicide bombers to go back because they've run out of virgins. The culture editor of Jyllands-Posten defended the cartoons, pointing to a long standing Danish tradition of hard hitting satire, and stated Islam was treated similarly to other religious targets. Several months later, the paper issued a partial apology, though they felt while there was nothing wrong with the cartoons, they realized Muslims were offended and were sorry for that. Funnily enough, they had previously refused to publish some unsolicited Jesus cartoons because the editor found them unfunny and offensive. [1] What double standards?

Afterwards, other newspapers throughout the western world republished the cartoons in defense of free speech. Many refused, fearful of Islamic reprisal; only the Boston Phoenix specifically, and openly, named such reprisal as the reason for its refusal. The Phoenix reasoned that it had a greater obligation to the safety of its employees.

Their subsequent publishing created an international firestorm, including Islamist protests and rioting in both Muslim[note 1] and non-Muslim countries. Several Danish consulates were set on fire, Danish embassies, and embassies of other Western countries, were stormed. Roughly 140 people died, there were boycotts against Danish products, there were death threats against the cartoonists and two were advised to go into hiding, and there were death threats against innocent citizens of countries where the cartoons had been published. A $1 million bounty and a car were promised to anyone who killed a cartoonist responsible for a cartoon. One cartoonist faced a murder attempt but the would-be murderer was killed in the attempt. Public bodies were inconsistent with each other, there were human-rights prosecutions against re-publishers of the cartoons, most notably that against the right-wing Canadian magazine, Western Standard, but other public authorities allowed publication considering that free speech was paramount.

The most memorable incident, a picture that burned itself into many a Dane's memory, was when the Muslims set fire to Dannebrog, the Danish flag. The Danes were understandably shaken, but also a bit confused, since it's commonly known that the only honorable way to get rid of Dannebrog is to burn it.[note 2]

Some Muslim clerics, to add gasoline to the fire, added some crudely-drawn and highly incendiary images to the ones published in Denmark, in order to inflame (let us know when the metaphor needs extinguishing) anti-Western hatred and emotions in Muslim countries.[2][3]

Some saner Muslims accused their not-so-moderate brethren of overreaction.[citation needed]