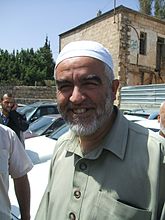 Raed Salah, Salah, whatever will be, will be...

Raed Salah (1958–) is the leader of the northern branch of the Islamic Movement in Israel. He was banned from entering the United Kingdom for alleged antisemitism, but managed to get in anyway, causing quite a bit of controversy.

Infamously, three weeks after 9/11 Salah wrote an article implying that Jews were behind the atrocity:

A suitable way was found to warn the 4,000 Jews who work every day at the Twin Towers to be absent from their work on September 11, 2001, and this is really what happened! Were 4,000 Jewish clerks absent [from their jobs] by chance, or was there another reason? At the same time, no such warning reached the 2,000 Muslims who worked every day in the Twin Towers, and therefore there were hundreds of Muslim victims.[1][2]

He has been accused of claiming that Jews use the blood of gentile children to bake bread. His comments were as follows:

We have never allowed ourselves to knead the bread that breaks the fast in the holy month of Ramadan with children's blood," he said. "Whoever wants a more thorough explanation, let him ask what used to happen to some children in Europe, whose blood was mixed in with the dough of the holy bread... Great God, is this a religion? Is this what God would want? God will deal with you yet for what you are doing.[3][4]

Salah has also stated that homosexuality "is a crime. A great crime. Such phenomena signal the start of the collapse of every society". He has said that women should serve "the supplementary role to that of the man". He is dismissive of critics of honor killings, saying that "We have to ask those who talk about murder for the sake of the family honor – mainly feminist organizations – what they did to prevent the murder of family honor itself... Some of the people who invented this concept are encouraging anarchy in the society".[1]

He has claimed that Hurricane Katrina was Allah's punishment for the actions of George W. Bush.[5] He has also appeared on television, chortling merrily as he reminisced about the time his high school class tormented a Jewish teacher by drawing a big swastika on the blackboard while he was out.[6]

In 2005 Salah was accused of funnelling money to Hamas, and was jailed after admitting to committing security offences.[7]

Salah was arrested in June 2011 following his arrival in London.[8]

Left-leaning British newspaper The Guardian was criticised for its positive spin on the affair, sweeping Salah's unsavoury beliefs under the carpet and painting his opponents as prejudiced. "The decision to ban the Palestinian leader Sheikh Raed Salah from entering Britain, and then to arrest him, was transparently not based on any serious examination of his political activities", wrote Haneen Zoabi. "It was an ugly kneejerk response to the growing hostility of the Israeli establishment and its supporters abroad towards anyone opposing its racist policies – and a rising tide of Islamophobia in Europe." She concludes that "The pro-Israeli lobby must not be allowed to determine politics in Britain. Palestinians in Israel see the arrest of Salah by the British authorities as backing Israeli policies against us. We ask the British people to reject this, not to allow Israeli racism to inform them and support instead our just demands for democracy in our own land."[9]

"What a fucking outrageous thing to do: to defend an outspoken racist, extremist and homophobe by accusing his critics of being racists and pawns of Israel!" replied "Lucy Lips". "This, incidentally, is the reason that the Guardian has a reputation for being part of this country’s Hamas support network."[10]

The Palestine Solidarity Campaign, Stop the War Coalition, British Muslim Initiative, Palestinian Forum in Britain and Friends of Al-Aqsa called for a silent protest against "the British government's attempt to silence Shaykh Raed Salah, and the government's prevention of him speaking to his legal team".[11]

A curious detail emerged after the trial: Professor Ilan Pappé, one of the witnesses who claimed that Salah was referring to the inquisition, revealed that he had based this assertation on a different piece of text than the one quoted above. He said that he had been given an Arabic text specifically referring to the treatment of Muslim children under the inquisition, but was unable to explain where it originated.[13] There has been speculation that the text shown to Pappé was forged by Salah's lawyers.

The verdict was subsequently overturned on appeal, and Salah was allowed to remain in Britain.[14]

A football field in Gaza was named after him.[15]