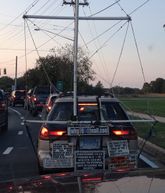 An anti-Catholic, anti-Trinity, and anti-American kookmobile, seen here featuring a "ship's mast" style nut pole. Obligatory 666 symbolism is also present.
Not to be confused with the establishment kookmobile. For the other type of 'nut pole', see here.

A kookmobile is a vehicle plastered with what a normal person — never mind a traffic cop — would likely consider to be an excessive amount of signs, stickers, ropes, flags and ornaments (and not during holiday season), all intended to advertise the driver's views to the public in the most lurid and convincing way possible. It can be considered a vehicle variant of Haig's Law where the awfulness of the Kookmobile's appearance is directly proportional to the insanity of its contents and creator.

Kookmobiles may sometimes also incorporate a so-called nut pole, i.e. a metal or wooden mast (often outfitted with various ropes and pulleys) from which signage, flags, and other assorted doodads may be hung on display. One benefit of a nut pole is that they make it very easy to find your car in a parking lot.

Drivers of kookmobiles (especially of those bearing nut poles) may rightfully be assumed to be armed, dangerous, and cranky, and should therefore be given a wide berth.

Kookmobiles are not to be confused with art cars

; kookmobiles are ugly vehicles that obnoxiously express political or religious statements, whereas art cars are primarily humorous and/or artistic in nature. The same risk of misidentification is also inherent for ham radio cars,[2] parade floats, and regular old sailing boats (which only venture onto land in order to mate).

If the car has a number on the sides and roof and the stickers are primarily automotive and tool companies, then that is not a kookmobile, that is a racecar.

on their way to the beach call the vehicle they're driving a kookmobile, don't get excited. It's just surf lingo for an ordinary car or van, and the only thing kooky about it is exactly how cooked (or shall we say, "kooked") the barefooted driver is currently.

Most kookmobile displays involve Jesus and the Bible; however, adornments featuring everything from 9/11 conspiracies to Second Amendment themes have been spotted in the wild.

One Idaho couple created a kookmobile specializing in anti-gay messages. They told reporters they painted the insults on the side of their truck to "make sure they were getting their message across wherever they went".

Obvious spelling errors are a surprisingly common feature of kookmobile signage. Some of the ethically dubious messages seen on the aforementioned couple's kookmobile include "Homosexuality is a sin & a [sic] abomination", "Just say NO to gay marriage" and — in a middle finger to Nietzsche — "God's not dead!" (or perhaps a salute to the awful film).[4]

A (for that state, highly typical) Pennsylvania man created a Trump-themed kookmobile that included the message "Trump 4 Presadent". When asked why he misspelled the word "president", he claimed that "everyone else is spelling it wrong". At that point, it probably seemed best not to ask why he misspelled "for".

Note that this particular kookmobile featured no lack of deluxe nut pole items, including these necessities of the road:[5]

An Ohio Tea Party enthusiast reportedly spent $32,000 to create his dream kookmobile. Jesus is conspicuously absent; however the vehicle features luxurious twin nut poles, flying gigantic Trump and "Don't Tread On Me" flags, a "9-11 pilgrimage" display, as well as "Not A Gun Free Zone" and "Impeach Obama" slogans.[6]

A Michigan Trump supporter created the "Trump Unity Bridge," to "heal a fractured nation," and proceeded to drive it across half the continent, all the way to the Trump Inauguration. The bridge featured messages such as "LOCK HER UP 2017," demonstrating a truly deeply-held belief in constructively bridging the divide between the people who supported making "her" president and the Trump supporters.[7] The bridge itself is uniquely famous, having been notably stolen and recovered 20 miles from its initial location 2 years prior to becoming the "Unity Bridge."[8] 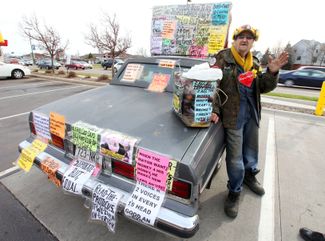 Quote: "2 voices in every 1's head." Caption ends here because the joke wrote itself.

One well-known kookmobile has been a popular Milwaukee, Wisconsin fixture for at least 25 years. Known as the "Godmobile", it's operated by a local character called "Brother Ron".[9]

, there have in fact been numerous discrete incarnations of the Godmobile over the years. Every single one of the vehicles holding the title in question have been uniformly drenched in Bible verses and kooky sayings. Honorable mentions include:

At various times, the Godmobile has sported more objects:

As such, Brother Ron's Godmobile even has its very own Yelp page.[10]