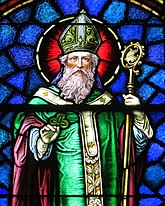 In Roman Catholic mythology, Saint Patrick (Irish spelling Pádraig) is the patron saint of Ireland. He was actually born in Britain [1][2] (or possibly France)[3][4] when it was controlled by the Roman Empire, kidnapped by Irish raiders at the age of 12, and taken to Ireland as a slave. He escaped back to Britain, then returned to Ireland as a Christian missionary to convert the pagans. Because bringing Christianity to Ireland worked out enormously well.

His dates are unknown, although probably around the late 5th century CE; he was mentioned by Cummian in 622 or 623 but earlier sources are silent.[5] Patrick's writings include one of the small handful of contemporary sources for what was happening in Britain between the end of Roman government and the Anglo-Saxon takeover.

St. Patrick's Day is a joyous festival on March 17 and an excuse to wear green and drink lots of Guinness and Bailey's. (Basically, an excuse to get drunk.) In Ireland, it is colloquially referred to as "Paddy's Day" while most Americans prefer to say "Patty's Day", presumably because they cannot go for any length of time without thinking of burgers.

T. F. O'Rahilly suggested the legends about Patrick originally referred to Palladius, who was sent to Ireland by Pope Celestine I in 431 CE. 7th-century hagiographer Tírechán portrays Patrick as a much tougher, more Chuck Norris-y figure, fighting druids and destroying pagan idols. Two writings by Patrick exist, which may be slightly more reliable about his life but contain none of the famous myths - Declaration (Confessio) and Letter to the soldiers of Coroticus. Hence the theory that there were 2 figures whose stories were confused to generate one St Patrick myth.[9]