Once upon a time, Somalia was a prosperous collection of city-states on an important waterway. From 1991 to 2006, it was an anarchic mess, where fundamentalists fought were corrupt warlords and pirates. The United States, with its ally, Ethiopia, have already stepped in once to keep the fundamentalists out, but that plan backfired and (like everywhere else) an insurgency raged and now Ethiopia has backed out. Unfortunately, it looks like those same fundies may be the only ones capable of restoring some degree of order within Somalia, making it a case of lesser evils.[citation needed] As of 2014, a new government had begun to consolidate power in Somalia in ways not seen since before the country tore itself apart after the Cold War.

Freedom from the curse of government![edit]

Somalia's current problems date back to the Cold War, when its leader played the two sides off against each other long enough to strike up a disastrous war with Ethiopia over a disputed territory (the Ogaden region, which is inhabited mostly by ethnic Somalis). After that failed, and the Cold War ended, its major source of funding dried up and he was toast. The US tried to make things better, but lost a few men and left. Continued aid to the country is often halted due to warlords hijacking aid trucks. The vast majority of Somalia's population lives just above the starvation line.

The "capital" of Somalia is Mogadishu, which used to be one of the great cities of the Islamic world. Now, it is an overcrowded mess. The lack of any real infrastructure has left a huge impact on the living conditions, and the lack of sustainable roads has placed huge burden on any effort of commercialization. This doesn't mean the population doesn't know what an iPod or a computer is, nor does it mean they ride camels everywhere. What it does mean, however, is that they get to watch people on televisions with all of these goods, and become envious of not having access to said goods.

For some reason, Ayn Rand fans, libertarians, and anarchists have been slow to flock to this paradise of free individuals with guns, able to negotiate their lives without the dead foot of the State on their necks (although some have praised it from the safety of the Internet).[1] This is likely for the same reason that communists aren't migrating en masse to North Korea. Specifically, much as a lot of communists would complain that North Korea doesn't have the right kind of communism[note 1], objectivists and libertarians might say that Somalia wasn't the right kind of anarchic situation in which a thriving industrialized economy could take root. Throughout the anarchic period, foreign countries were attempting to reestablish a state in Somalia, creating the kind of political uncertainty that tends to spook potential investors of financial and human capital.

A cheap holiday in other people's misery[edit]

Wikivoyage gets it wrong; travel within Somalia, while not without its perils, is entirely possible. As of late, the main airport servicing Mogadishu has been bombed out, but alternate ways to enter the country do exist. Due to the fact there is no central government, and hasn't been (in effect) for a long period of time, one must be prepared to pay one's way through the country. The city of Mogadishu is sectioned up amongst local warlords, as is the rest of the country, so travelling from section to section can become quite complicated as bribe amounts differ. Luckily for travelers, Islamic Law actually has a provision protecting foreigners where Islamic Law is the rule of the land. Travel northeast of Mogadishu is highly inadvisable due to the clusterfuck piracy situation. However, travel west (northwest) outside the city is highly rewarding, as major historical sites such as Taleex and Beledweyne lie there. 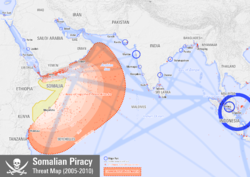 Somalia had a lot of pirates in 2010.[2] Whether this helped slow global warming is unclear, but in any case it is clear that Somalia is once again contributing carbon emissions.

In November 2008 Somalian piracy started to hit the headlines with a large number of ships being held for ransom and international calls for action. However, in 2009, action against piracy by a vast collection of nations, including all the heavy-weights, has dropped the number of pirate attacks.

The situation with the Somali pirates was a tricky one. Due to the lack of a central government, and therefore any sort of formal military or coast guard, Somalia was unable to enforce maritime law in its waters. This has led not only to massive overfishing, but even the dumping of nuclear waste and other toxic nastiness in Somalian waters. Many of the pirates were former fishermen who were rendered unable to scrape together even a meager living due to this, and therefore took matters into their own hands.

While the West and China were quick to stamp out the pirates, they have done nothing to help enforce the flagrantly broken laws which forced many of these men into piracy in the first place. This has led to the creation of the world's largest pirate prison[2] which may be a good seed for future action-adventure movies.