From RationalWiki
(Redirected from 1996 U.S. Presidential Election)
Jump to navigation Jump to search 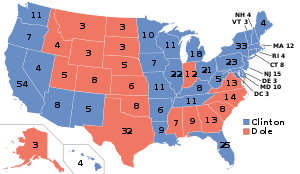 Completely unrelated to the fact that the Lewinsky scandal would be two years later, doesn't Florida look like a—

The 1996 U.S. presidential election saw Bill Clinton easily re-elected over the Republican Party candidate, Bob Dole.[1] Ross Perot ran again, this time as the candidate of the fledgling Reform Party, but received only about half the support he had in 1992.[2]

The early 1990s had been a time of growing anti-government sentiment, but this sentiment cooled considerably following the 1995 Oklahoma City bombing while a rebounding economy during the latter half of the decade helped further solidify Clinton's support. Bill Clinton did not face any serious challengers in the primary; the only recognizable name running against him was perennial fringe candidate Lyndon LaRouche. Several Republican candidates contested the primaries, including former Tennessee governor and now Senator Lamar Alexander, magazine publisher Steve Forbes, Senator Phil Gramm of Texas, perennial candidate Alan Keyes, and finally Pat Buchanan. Buchanan won an upset victory in the New Hampshire primary and Forbes won a couple of early primaries as well, but Bob Dole, then Senate Majority Leader, solidified his front-runner status early on and his nomination was rarely in doubt. The Reform Party primaries were mostly memorable for former Democratic Governor of Colorado Richard Lamm challenging Ross Perot for the nomination and running up against a brick wall; it was Perot's party, he started it, and he wasn't going to let anyone else play in his private clubhouse.

Green Party activists convinced Ralph Nader to run that year as a candidate. He was on the ballot in only 22 states and mostly ran a passive campaign, unlike four years later in 2000 when he was much more of a factor in the race. Nader's strongest base of support was 2-4% in Oregon, Alaska, Hawaii, Maine, Washington, and the District of Columbia, negligible elsewhere. While the left was unhappy with Clinton over issues such as NAFTA, the anti-globalization movement would not grab national attention until 1999-2000, and with Perot, who took the anti-NAFTA side in a televised debate with Al Gore in 1993, getting much of the anti-NAFTA vote, this did not translate into an upsurge in support for Nader as it would in 2000.

Bob Dole, at 73 years of age, was the oldest first-time presidential nominee of a major party, tying Ronald Reagan's age when he ran for re-election in 1984. Clinton successfully framed the campaign as one of looking to the future rather than the past, while Dole ran on his age and his status as part of the World War II generation, in his nomination acceptance speech attacking "the elite who never grew up, never did anything real, never sacrificed, never suffered and never learned".[3] This didn't help him. Dole's running mate was Jack Kemp, known for being a longtime advocate of supply side economics in Congress.

The 1996 campaign is mostly memorable for being decidedly unmemorable.[4]

Ever since Bill Clinton was elected, disaster ensued for the Democrats. In 1993, the Texas senate seat flipped, reducing the Democrats to 56-44 in the Senate. They also flipped governorships in New Jersey and Virginia. They also flipped mayorships in Los Angeles, and New York City. The New York mayorship would not go blue until 2013. Then, in 1994, the Republican Revolution struck. Republicans picked up 58 seats, and even defeated a speaker, and Democrats only picked up 4 open seats, giving the GOP a House majority for the first time since the 1950s.[5] They also gained 8 seats, and 2 senators changed affiliation[6], allowing the Republicans to have a 54-46 majority in the Senate. They flipped ten governorships, including Connecticut off of the A Connecticut Party, and 9 from Democrats. They did lose Maine to an Independent, and Democrats narrowly flipped Alaska by 0.3% from the Alaska Independence Party (who switched affiliation to the Republicans). In addition, multiple representatives throughout 1995 changed affiliation. In 1995, as well, despite the Democrats picking up the senate seat in Oregon, narrowing the GOP majority to 53-47, the Republicans picked up the governorship in Louisiana.