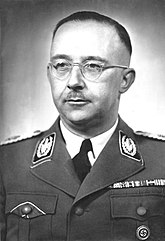 Heinrich Himmler (1900–1945) was the head of the Waffen-SS and the Gestapo, and had overall control of the Nazi Concentration camps.

Himmler became obsessed with racial purity. Himmler personally looked at the pictures of SS applicants to ensure that they were ‘physically and racially suitable. [2] In 1939 he gave the Procreation Order. This order commanded SS men have children with “German women and girls of good blood” – even out of wedlock”. This was done to ensure the continuation of Aryan bloodlines (Lebensborn) should the father be killed in battle.[3]

See the main article on this topic: Holocaust 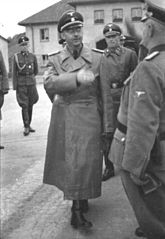 Himmler was one of the leading perpetrators of the Holocaust. He became the leader of the SS (Reichsführer-SS) in 1929, a position he held until the end of the Second World War.

By the mid-1930’s Himmler had taken total control of Germany’s police force. He also gained control of the Gestapo from Hermann Goering. Initially the Gestapo was used to track down political opponents, however, it later became involved in tracking down Jews and sending them to concentration camps.[4]

He set up and had overall control of the Nazi concentration camps and death camps. In 1941 he ordered Rudolf Höss, the Commandant of Auschwitz, to begin exterminating the Jews. He said "the Führer had given the order for a Final Solution of the Jewish Question…. we, the SS, must carry out that order"[5] In August 1941, Himmler watched the mass shooting of Jews in Minsk. During the murder Himmler's uniform was splattered by the blood of one of the victims. It is said that Himmler turned green and vomited afterwards.[6] Concerned about the psychological impact of mass shootings on his SS men, Himmler ordered that more 'efficient' methods be found and the SS started to increase the use of gas.

Under Himmler's orders, new arrivals to concentration camps were put through a selection process by the camp guards. Those considered ‘fit for work’ were used as slave labour, where many would later die from exhaustion, starvation or disease. Those who were not selected for labour were immediately condemned to death.[7]

He is also responsible for setting up the dreaded Einsatzgruppen, the Nazi’s paramilitary death squads. Einsatzgruppen conducted many of the mass killings behind German lines in Nazi-occupied Europe. Many of Einsatzgruppen’s victims were Jewish, with up to 80% of Jewish population of Lithuania being murdered. [8]

Recognising that the war was lost, Himmler attempted to engage in peace talks with the Allies without the permission of Hitler. This included a meeting with a Swedish representative of the World Jewish Congress,

where Himmler had the audacity to claim that Auschwitz had a high survival rate. He also embarked on negotiations with the leader of the Swedish Red Cross, in which Himmler described himself as the soon-to-be leader of Germany.

On the 28 April, news of Himmler's negotiation attempts were leaked to the BBC. Hitler was enraged at this and stripped Himmler of all his ranks and ordered his arrest. Himmler's representative in Berlin, Hermann Fegelein, was executed the next day.

Himmler used the fake identity 'Heinrich Hitzinger' in an attempted to evade the Allies, but was picked up by the British Army. He quickly admitted who he really was and was taken to British Army headquarters. When a doctor tried to conduct a medical examination on him, he bit into a cyanide capsule and subsequently died 15 minutes later.