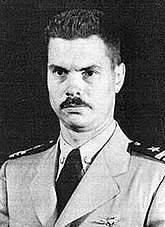 George Lincoln Rockwell (1918–1967), known as "Commander Rockwell", "Rocky", or "Link" to his followers, was an American Nazi sympathizer and Holocaust denier who is best known for founding the American Nazi Party (originally the "World Union of Free Enterprise National Socialists"), later known as the "National Socialist White People's Party"[Note 2]) in 1959. Prior to entering politics, Rockwell, a veteran of both World War II and the Korean War (US Navy pilot), had worked as a commercial illustrator, sign painter, magazine publisher, advertising copywriter, and sales agent.

Though Rockwell is often credited with heavily influencing many of today's neo-nazis, to the point of being responsible for coining their favorite phrase "White Power", he was largely considered a joke back in the day. For instance, when he ran as a write-in candidate for president in 1964 he received a measly 212 votes, whereas today's "American Freedom Party", a modern neo-fascist political party, managed to get over ten times that in 2012.[2] At its height during his leadership, his group had no more than an estimated 100 dues-paying members.

The emperor's got no brains[edit]

George Lincoln Rockwell is an egocentric and a chronic failure who created the shabby, small-time enterprise that he named the American Nazi Party in order to abate his tormenting ambitions to achieve fame. Carrying the war-tattered banner of a vanquished enemy the world would like to forget, Rockwell leads his heterogeneous 'army' against an imaginary 'Zionist conspiracy.' Distasteful costumes, contemptible slogans, and disruptive tactics have brought national attention to Rockwell, inflating him and his group far beyond their due.

The same report stated that, at times, the Party's headquarters often had their utilities shut off due to non-payment of bills, and that his self-professed "Stormtroopers" often subsisted on beans, canned hash, and even cat food. According to one of his former Stormtroopers, Rockwell was a selfish leader:[5]

[He] would usually sit around and read or sleep away most of the day while the rest of us would work or look for work...Many sympathizers would bring food over to the headquarters during the winter months, and Link would take the choicest food and hog it up and leave the scraps for everyone else.

Rockwell was more influential when it came to his attempts to counter the Civil Rights Movement, organizing several counter-demonstrations, partly under the delusion that Martin Luther King was part of a Jewish conspiracy to undermine America.[7] He also lent support to the Ku Klux Klan during this era, but that may have ultimately hurt the Klan's image more than it helped it, since even the Dixiecrats didn't care for Nazis.

Unsurprisingly, Rockwell expressed admiration for both Elijah Mohammed (the founder of the Nation of Islam) and Malcolm X, declaring Mohammed to be the "Black Man's Hitler". Though Mohammed invited Rockwell to speak at a Nation of Islam rally, Malcolm X didn't receive him so kindly, threatening him with "maximum physical retaliation from those of us who are not hand-cuffed by the disarming philosophy of nonviolence" if Rockwell harmed MLK or any other member of the black community.[8]

Rockwell's skills in advertising were used to help promote his Nazi cause, with professionally designed hate literature, often the work of Rockwell himself, that promoted the party's philosophy, which includes some of the earliest accounts of Holocaust denial. Party propaganda material included books and pamphlets by Rockwell, recordings of his speeches[9], a racist comic book[10], and a pair of 45 RPM singles on the "Hatenanny" label, one by Odis Cochran and the Three Bigots, the other credited as "G.L. Rockwell and the Coon Hunters",[11][12][13] sold through mail order and at party functions.[14]

He also drove around in a VW van decorated with white supremacist slogans and dubbed it the "Hate Bus". Years later, the hippies, whom Rockwell openly despised, would adopt the VW van as their own totem as the "Love Bus".[Note 3] According to the FBI monograph on Rockwell, the van was repossessed after a loan default.

During the height of his popularity, Rockwell gave an interview for Playboy magazine in 1966 (notably, interviewed by Alex Haley, who would go on to write the book Roots),[15] and had an extensive speaking tour at American colleges, where he was invited to speak about his extremist views,[Note 4] and was earning an estimated $2,000 a week — translating to roughly $14,875 a week in 2016.[16]

Rockwell was assassinated in his car by a former member of his group in 1967. John Patler (Patsalos) — who had illustrated a number of ANP/NSWPP pamphlets — shot Rockwell twice with a model 1896 Mauser pistol, a gun used by the Nazis during WW2 as well as by Soviet commissars and chekists,[Note 5] in the parking lot of an Arlington, Virginia laundromat.[18] Were his whites not bleached enough?

When his 78-year-old father, ex-vaudeville performer George Lovejoy "Doc" Rockwell, discovered his son had been murdered he said, "I am not surprised at all. I've expected it for quite some time".[17] Estranged from his father for years, the particular shit-apple that was George Lincoln Rockwell had fallen from its tree more as if thrown with great force.

August 25th, the anniversary of Rockwell's assassination, has often been marked by some sort of observance or vigil by Neo-Nazis in the Arlington area. In the past, a swastika was painted in the parking lot on the spot where Rockwell died.[19] In 2015, a flyer promoting the Neo-Nazi group the New Order was found taped to an electrical box across the street from the parking lot.[20]

The two-story farmhouse in Arlington, Virginia, where Rockwell ran his "Stormtrooper Barracks" (and where Alex Haley interviewed Rockwell for Playboy magazine) has since been torn down, and the property is now a picnic table pavilion in Upton Hills Regional Park.[19] The former party headquarters on North Randall Street has also been torn down and is the site of a hotel and office complex.

Rockwell's right-hand man, Matthais "Matt" Koehl (1935—2014),[25] took over the organization after Rockwell's death, though infighting between wannabe leaders of the "party" would lead to several splinter groups breaking off from the original, temporarily weakening the organization of Nazis in America until onetime Rockwell associate William Luther Pierce (1933–2002) picked up the baton with his National Alliance later in the 1970s. Rockwell himself is still beloved by neo-Nazis,[26][27] and his writings are still read by the prospective Stormtroopers of today.[Note 6]

was formed in 1974 by two former members of the ANP. In 2019, the president, Jeff Schoep, was convinced to sign over leadership to African American civil rights leader James Stern.[28] Stern has asked the judge in a lawsuit against the NSP's involvement in the Unite the Right rally to find the organization guilty.[28] Following Stern's death on 6 November 2019,[29] Burt Colucci took control of NSM and registered the group in Florida.[29]

In the third season of the "alternative history" TV series The Man In the High Castle (about an Axis take-over of the USA after WW2), Rockwell, portrayed by actor David Furr, is the Reichsmarshall of North America and has an airport in New York City named after him. [30][31]