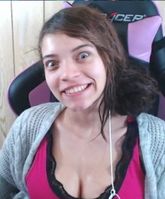 Brittany Venti[note 1] (1997–),[2] also known by her legal name Brittany Dier, is an alt-right-adjacent "troll" and fascist-sympathizing YouTube streamer known for her large breasts, controversial takes and actions online which have resulted in her gaining an (equally fascist) audience and follower base. She has accumulated 155K subscribers on YouTube as of 2021.

From "feminist" streamer to alt-right troll[edit]

Brittany Venti started her online streaming brand in 2015 on the streaming site Twitch (which she is now banned from)[4] by broadcasting herself playing video games like Grand Theft Auto.

Venti became a 'lolcow' after freaking out on stream and claiming another player was 'raping' her in game,[5] which prompted a number of online debates about her behavior and prompted her to develop a character around her perception as an unstable YouTuber and game streamer.[6]

After the victory of Donald J. Trump in the 2016 United States general election causing the rise of the alt-right and neo-fascist politics, Venti, like many other internet personalities, began socially and monetarily capitalizing on the rise of a much younger, energetic and online far-right by joining in on the real-life trolling at Shia Labeouf's anti-Trump art show in New York City called “He Will Not Divide Us” in 2017.[7] This resulted in her gaining followers from 4chan’s neo-Nazi infested board /pol/ and being named "The Queen of /pol/" by some of its users. It also resulted in piggybacking off the fame of far-right commentator and Vice co-founder Gavin McInnes and failed far-right rapper Tim Gionet who goes by the online persona 'Baked Alaska'. She also was in attendance at a local May Day Rally in New York City with far-right agitator Laura Loomer where she ended up being arrested[8] and marching alongside Tiki Torch-wielding fascists[9] at the deadly and violent neo-Nazi rally "Unite the Right" in Charlottesville, Virginia, which resulted in the death of multiple people, including 32-year-old Heather Heyer who was run over by a member of the white supremacist group Vanguard America, James Alex Fields Jr. Venti is seen on (a now-private livestream) defending the white nationalist 'protestors' in attendance and even justifying the actions of Mr. Fields.[10]

However, many have debated whether Venti actually believes the stuff she says or is just riding the rising wave of fascist alt-right politics and beliefs online.[11] This has caused some to believe that Venti is just a "clout chasing e-girl" who latches onto any far-right e-celeb that enters her vicinity for content while throwing them under the bus when socially convenient.

In one of her streams, Venti compares meeting internet personalities within alt-right circles to Pokémon, which in her words she needs to "Catch 'em all."[12]

In recent years, however, Venti has adapted her image, taking a strong (yet ironic) stance against pornography and has since regularly been attacking and starting internet flame wars with other more popular women online such as famous Twitch streamer "Pokimane", anti-feminist YouTuber Shoe0nHead[13] and Anisa Johma, the girlfriend of famous YouTuber IDubbbzTV while gaining a fringe misogynistic incel audience along the way. Venti has attacked these women merely because they do not fit her (or shall we say, her audience's) views on women, traditionalism, and conservative Catholic values. Something that Venti is clearly a massive champion of.

Venti, being born from a black mother [14] and white father, is of mixed-race heritage. Venti's views on race are not consistent and tend to contradict each other at times; however, it can be assumed that she has some symptoms of internalized discrimination.[15]

In January of 2018, Venti was given a 24-hour ban when a video she posted about "African cooking" was deemed to contain racist and offensive stereotypes of Africa and Haiti, claiming to call people from those regions "dirt eaters" and her (now ex) boyfriend in the background could be heard mocking Venti's "African IQ" and proceeding to make clicking noises as a form mocking some African languages. As a result, this deeply enraged her as she said that she is half-black as her mother is black. She even attached her DNA results in order to prove her claim.[16]

Venti's views on race can contradict and fluctuate at times, whether this is a way to "troll the libs" or she is just that incompetent. She seems to only care about being black when it socially benefits her or helps her to get out of problems she created herself[17][18]

Anywhere /pol/ goes, the International Jewish conspiracy and 'Jew jokes' aren't too far behind. Many of these kinds of ideas have managed to seep themselves through the crusty cracks of Venti's fanbase and out of her mouth. Despite some claiming "it's just a joke she doesn't REALLY believe that", Venti has been seen on multiple accounts espousing the common antisemitic talking points, such as calling donations from her viewers "Goyns" (a mixture between "Goyim" (non-Jewish) and "coin"), having members in her own stream chats saying "Gas the Kikes!" and is also seen rubbing her hands together after receiving a huge donation from one of her viewers like the "Le Happy Merchant Meme",[19] an antisemitic caricature drawn by Neo Nazi cartoonist "A. Wyatt Mann", and is a common meme posted by neo-Nnazis and fascists on /pol/.

Whether Venti actually believes these things or is just shitposting, it is very clear that some alt-right elements seeped into her audience, and she has adopted or explored these beliefs at some point.

Hypocrisy and inconsistency in logic[edit]

Despite admitting to be of mixed-racial heritage[20] and being the recipient of racist attacks on her mixed heritage by the white nationalist elements of her follower base online, Venti has proudly aligned with many white nationalist and neo-Nazi social media figures and YouTubers such as Lauren Rose and Nick Fuentes.

Claiming to oppose pornography (which is ironic since she has made money showing her breasts to incels online). She has also previously suggested that she would consider doing pornography in the future[21] and even started an OnlyFans account. [22]